Steven Hiller is one of the main protagonists of the 1996 action film Independence Day and a posthumous character in Independence Day: Resurgance. He is a fighter pilot who dreams of being an astronaut. Later in The War of 1996, he plays a key role in saving the world with David Levinson by flying an alien fighter into the mothership, allowing David to upload a virus into the ship disabling the aliens' shields. He is portrayed by Will Smith who also played Agent J in the Men In Black trilogy, Mike Lowrey in the Bad Boys films, Genie in the Aladdin remake, Oscar in Shark Tale, Lance Sterling in Spies in Disguise and a fictional version of himself in The Fresh Prince of Bel-Air.

He did not return in the 2016 sequel Independence Day: Resurgence and the viral website explained that he had died in an alien spacecraft accident.[1]

Captain Hiller was first seen sleeping with his girlfriend Jasmine and was woken up by the spacecrafts and his girlfriends son who was playing outside. After arguing with his girlfriend he heads off to El Toro with the other military pilots that got their leave on the 4th cancelled. After several cities are demolished Steven Hiller along with the Black Knights Squadron launched a counteroffensive but their weapons including Hillers F-18 could not do damage to the spaceships' force fields. After squadrons of smaller spaceships attacked only Hiller survived the battle while his other wingman perished in the hands of the alien. When being chased by an alien attacker he made his F-18s parachute cover the aliens windshield and eject when his jet was out of fuel causing the alien attacker craft to crash landed where Hiller punches the alien and welcomes the alien to earth. After walking for hours to a military base that he saw while flying overhead he was picked up by a truck and was allowed to go into Area 51 due to he knocked out an alien unconscious and was about to leave the alien with the guard until the guard lets the Captain pass. In Area 51 he meet the generals, commanders and President Whitmore himself and was anxious to get back to El Toro only to learn that El Toro was destroyed earlier. Wondering if Jasmine and a few survivors that survive the alien attack on LA he persuade a soldier to let him borrow a helicopter to pick up the survivors including Jasmine and Dylan. The next day after David introduce a computer virus that could disable their shields by planting a virus into the aliens mothership Hiller volunteers to pilot the alien craft due to he seen those things in action and well aware of their maneuvering capabilities. After a brief wedding with Hiller and Jasmine Hiller got two cigars for him and David to do smoking with only when the fat lady sings. After they take off they flew straight into space and into the mothership where David introduce power windows to hid from the aliens while David plants the virus on the mothership. They then fire the nuclear warhead into the center of the motherships core and Hiller narrowly escapes the closing doors of the mothership and yelled "ELVIS HAS LEFT THE BUILDING!" as the mothership explodes due to nuclear weapon they launched at. Hiller made a crash landing with both him and David unharmed and reunited with their friends and family on earth after they managed to destroy the last of the aliens. The good guys including Hiller then celebrated the 4th of July and Hiller did promised Dylan about fireworks.

Despite the aliens' defeat, Hiller participated in neutralizing surviving alien remnants in Russia.

Some years following after the invasion, Steven and his family temporarily lived in Washington, D.C. until moving to Nevada in which he joined the Earth Space Defense, serving as a test pilot and flight trainer. He was sent to China as a technical advisor and became acquainted with Jiang Lao and his niece Rain Lao, to whom he gave an autograph.

In 2007, he volunteered to test flight an experimental alien hybrid fighter while realizing the potential hazard of the aircraft in which he conscientiously refused to have inexperienced pilots be put in danger in the fighter. Hiller flew the fighter in the 2007 ESD Spring Expo; in which the aircraft malfunctioned, causing it to violently explode, killing Hiller.

Hiller's death was heavily publicized during which time the Lucas Jacobs administration came under fire for gross negligence for rushing the prototype hybrid fighter before it was ready. The incident also caused David Levinson to become Director of the ESD in order to prevent similar government negligence over the ESD.

Steven in his F-18 flying to attack the aliens.

"Now that's what I call a close encounter" 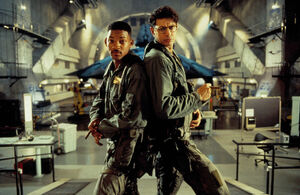 "I have gotta get me one of these!"

"Elvis has left the building!" (David Levinson: "Oh, thank you very much! Oh, I love you.")

A portrait of Hiller in the White House.

Photo of Steven in Dylan's Locker. 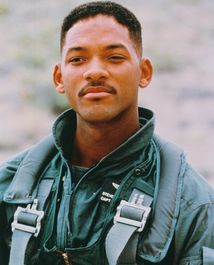 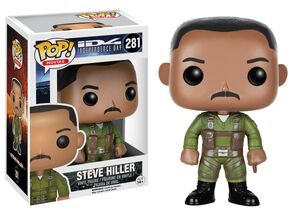