To get away from the stalker Cable Guy (Succeeded)

Steven Kovacs is the main protagonist of the 1996 dark comedy film The Cable Guy.

After his girlfriend flips out and gives him the boot, Steven Kovacs gets the very last thing he needed to fill the new void: an incredibly bizarre cable installer named Chip who latches on and insinuates himself into Steven's life. To his credit, Chip does lots of favors for Steven, up to and including helping him win back his girlfriend Robin Harris, but his odd, off-putting and sometimes illicit behavior (including buying Steven a prostitute and then making it up to him by beating the crap out of Robin's date, and later getting him an overelaborate entertainment system via "connections"... which ends up being stolen) proves too much to take and Steven eventually has to tell him to take a hike. Things quickly turn sour after that, and Steven finds out just how weird his "pal" really is when Chip begins stalking him and pulling various strings to try and ruin his life.

He is portrayed by Matthew Broderick, who also played Simba in the Lion King, the title character in Inspector Gadget, and Ferris Bueller in Ferris Bueller's Day Off.

After a failed marriage proposal to his girlfriend Robin Harris, Steven M. Kovacs moves into his own apartment after they agree to spend some time apart. Enthusiastic cable guy Ernie "Chip" Douglas, an eccentric man with a lisp, installs his cable. Taking advice from his friend Rick Lagodos, Steven bribes Chip to give him free movie channels, to which Chip agrees. Before he leaves, Chip gets Steven to hang out with him the next day and makes him one of his "preferred customers".

As promised, Chip arrives the next day, and he takes Steven to the satellite dish responsible for sending out television signals. Steven tells his problems with Robin to Chip, who advises him to admit his faults to Robin and invite her over to watch Sleepless in Seattle, which is running on HBO the following night. Steven takes Chip's advice, and Robin concurs to watch the film with him. The next day, Chip begins acting more suspiciously, "running into" Steven and his friends at the gym and leaving several messages on Steven's answering machine. When Robin shows up to watch the film, the cable is out because of Chip, who intentionally sabotaged Steven's cable when he did not call Chip back. Chip fixes the cable under the condition that they hang around again, to which Steven concurs.

The following evening, Chip takes Steven to Medieval Times, where Chip arranges for them to battle in the arena, referencing the Star Trek episode "Amok Time". Chip behaves belligerently, nearly having Steven slaughtered, who bests him in combat at last. Afterwards, Chip congratulates Steven, who decides the experience was fun. When they show up at Steven's home, Chip reveals that he has installed an expensive home theater system in his living room. Chip and Steven later host a party, complete with a karaoke sing-off. With Chip's assistance, Steven sleeps with a woman named Heather. The next morning Chip reveals that Heather is a prostitute. Furious, Steven throws Chip out, but Chip assures Steven he will make things better.

Chip tracks Robin down, who’s on a date with a different man. When the man goes to the restroom, Chip severely roughs him up and tells him to stay away from Robin. He upgrades Robin's cable afterwards, saying that it is on Steven. Robin decides to get back together with Steven as a result. Steven tells Chip the two of them cannot be friends, which deliberately hurts Chip. Then Chip begins a series of vengeful acts. He gets Steven apprehended for possession of stolen property (the home theater system), although Steven is released on bail.

During a dinner with his family and Robin, Steven is scared to see Chip is in attendance as well. Steven tells him to depart, but Chip tells him to play along or he’ll show everybody a picture of Steven with the prostitute. The evening goes from bad to worse, with Steven punching Chip after the latter implies he slept with Robin. Later, Steven gets fired from his job when Chip sends out a video of Steven being disrespectful to his boss, saying, “I hate him.”, while the entire office was recorded on hidden cameras in his apartment.

After doing some investigating, Rick tells Steven that Chip has been fired from the cable company for stalking customers, and uses the names of television characters as aliases (with his current alias taken from My Three Sons). After having a weird dream of Chip stalking him with baleful green eyes, Steven is called by Chip that same night soon after, telling him he is paying Robin a visit. Steven tracks them down to the satellite dish, where Chip holds Robin hostage. After a physical altercation and a chase, Steven gets the upper hand and is able to rescue Robin. As the police show up, Chip goes into a long speech on how he was raised by television and owes Steven an apology for being a bad friend. Then Chip dives into the satellite dish, knocking out the television signal to the entire town, just as the verdict in a highly publicized case involving a famous child star is about to be revealed.

Chip survives the fall, but injures his back. As Steven and Robin reunite, Steven forgives Chip and asks for his real name. Chip jokingly replies "Ricky Ricardo". Chip is taken to the hospital in a helicopter later on. When one of the paramedics addresses him as "buddy", Chip asks the paramedic if he is truly his buddy, to which the paramedic replies "Yeah, sure you are", causing Chip to smile slyly just before the credits roll. 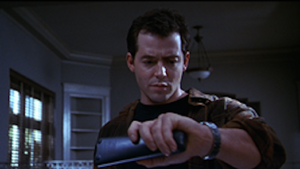 "Where is the Cable Guy?! He should've been here hours ago!" 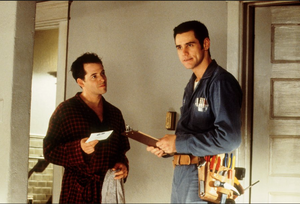 Steven meets the Cable Guy who introduces himself as Chip Douglas.

"Could you install the movie channels for free?" (Chip:"What you've done is illegal and you could serve time in jail.) "No, please, that was dumb. I was just making conversation. Forget it." (Chip [wheezing laughter]: I'm just jerkin' your chain!) 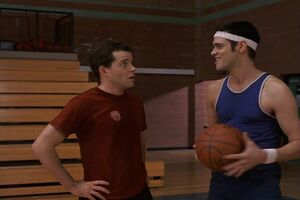 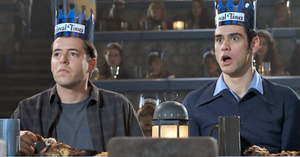 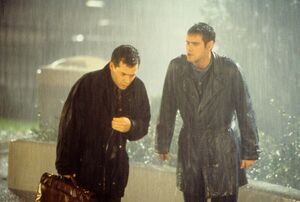 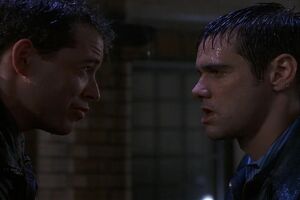 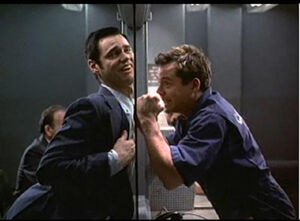 "Don't do that! Jesus Christ! You're gonna get me killed!"

Steven has a nightmare of Cable Guy charging at his door. 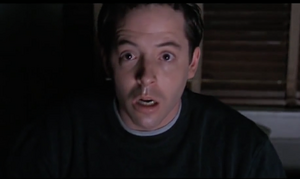 Battle in the rain on top the satellite dish.