"Stevonnie" is the nickname given to the fusion of Steven and Connie by Amethyst. They make their debut in the episode, "Alone Together."

She is voiced by AJ Michalka (who also voiced Catra in She-Ra and the Princesses of Power) in English and Akeno Watanabe in Japanese.

Stevonnie is currently the shortest fusion in the series. They are taller than Amethyst and Pearl, but is a few inches shorter than Garnet. They have an average/athletic build consisting of Connie's slim figure with Steven's chubby features. They have black curly hair that reaches past their hips, and a complexion slightly darker than Steven's. However, in "Lars of the Stars", "Jungle Moon", "Together Alone", "Escapism" and "Bismuth Casual", Stevonnie wears her hair in a ponytail, due to Connie's chin-length bobcut hairstyle since "Kevin Party" up to "The Future". Their attire consists of Steven's star shirt layered under a cropped version of Connie's turquoise dress, Steven's jeans morphed into cutoff shorts, and bare feet. Stevonnie appears to be a teenager, similar in height to the other teenage characters (Lars,Sadie, etc.) Stevonnie is considered very beautiful, as the citizens of Beach City seem to be in awe of their appearance and personality.

Stevonnie's personality is unique. They are the first fusion between a half-Gem and a non-Gem, and they do not have a single, distinct mind apparent in other Fusion Gems. Stevonnie shares the minds and personalities of Connie and Steven; Connie and Steven frequently alternate in their control of Stevonnie's behavior and thoughts (Connie takes the lead more often). They carry the free spirit, friendliness, and fun-loving attitude of Steven and the courtesy, awkwardness, and intelligence of Connie.

In "Alone Together," The Crystal Gems are trying to teach Steven Universe to dance, hoping he will develop the power of fusion—the ability of Gems to merge their minds and bodies to form more powerful individuals. Steven has difficulty mastering the dance steps, and Pearl is unsure whether fusion is even possible for him, though Amethyst and Garnet have more confidence.

Later, Steven discusses his difficulties with Connie. She tells him she admires him for even trying, saying she's usually too nervous to dance in front of other people. Steven invites her to dance with him on the beach. As they dance, Steven's gem begins to glow, and he and Connie inadvertently fuse.

They show the Gems their fused form—dubbed "Stevonnie" by Amethyst. Pearl is perturbed by the unprecedented fusion of a Gem with a human, but Garnet is thrilled, and advises Stevonnie to “go have fun!”

Stevonnie revels in the capabilities of their fused body, running and diving on the beach. When they stop for a snack at The Big Donut, the employees Lars and Sadie are flustered and amazed by their beauty. Steven and Connie, through Stevonnie's voice, briefly check in with each other to ensure that they are comfortable remaining fused. Steven's friend Sour Cream meets Stevonnie, and invites them to a rave he's DJing later that night.

At the rave, Stevonnie's graceful and athletic moves on the dance floor draw everyone's attention and admiration. Stevonnie, feeling anxious at being the center of attention and the only person dancing, begins to experience a panic attack, visualizing their anxiety as a disco ball closing in around them. They are interrupted by Kevin, an arrogant teenager who wants them to dance with him. Stevonnie flees the dance floor, feeling isolated.

Kevin follows them, invading Stevonnie's personal space and refusing to take no for an answer. Eventually, disgusted, they agree to dance with him. Stevonnie's violent and angry dance moves confuse and disconcert Kevin, and soon Stevonnie falls apart and unfuses. Kevin panics and leaves. Steven and Connie laugh with nervous relief, and Sour Cream showers them with glowsticks as they run about on the dance floor.

In "Crack the Whip," Stevonnie briefly appears and does not speak, when Steven and Connie dance after Greg puts Nietzche's Breakdown on. Greg is shocked that they can fuse, and they stare at each other in silence for a couple of seconds before they unfuse.

In "Beach City Drift", Kevin reappears and treats Greg with disrespect until Steven comes to his defense, still angry about the previous incident from "Alone Together". After he drives off, Steven says that he wishes he could race Kevin and rub the winning ribbon in his face. Connie says that kids cannot drive because it is against the law, but Steven mentions that they were not kids when they met Kevin, and Connie understands Steven's implication. At the bottom of a hill in a parking lot, Buck, Sour Cream, Ronaldo, and a few others watch as Kevin finishes a car race before Jenny does, who is mad that her practice did not pay off. Kevin rubs it in her face before asking if anyone else would want to race him down the hill. A car then pulls up in the parking lot and Stevonnie gets out, telling Kevin that they will race him.

Kevin realizes that the "brats" at the car wash that seemed familiar are Stevonnie. He says that he will not be fooled by their "two kids in a beautiful trench coat" routine. He claims that Stevonnie is obsessed with him and that he is a little old for them. This angers Stevonnie, who asks if he wants to race or not. Kevin says that the start of the race is at the top of the mountain and that they will start when the clock strikes the hour. He also includes that the first one to the bottom of the mountain wins, but that they do not have to worry about the last part, implying that Stevonnie will lose. This angers Stevonnie, and Kevin races away up the mountain leaving a cloud of dust and smoke that everyone coughs on, except for Stevonnie, who claims that Kevin is "going down.".

At the top of the mountain, Kevin and Stevonnie are lined up, getting ready to race. Kevin looks at his watch, as it is almost time for the race to start. The race starts, and after driving for a bit, an upcoming curved road sign is shown. On the mountain's road, Kevin seems to be far ahead of where Stevonnie is, but Stevonnie races in front of him, saying that they will not let him win. Stevonnie laughs at Kevin, who is behind them but sees the upcoming curve on the road. Stevonnie quickly breaks and turns, and they laugh when they realize they are drifting. Kevin appears next to them, and he teases them for actually knowing how to drive the car before speeding ahead of them.

As the race progresses, Kevin continues to mock and tease Stevonnie. Stevonnie then asks Kevin why he always has to be such a jerk, and Kevin responds with a story about his little brother being sick. Stevonnie shows sympathy for Kevin, but he reveals his story to be a lie. Stevonnie gets angry as Kevin speeds up in front of them. They begin to see a vision of only seeing Kevin's car and the road, but try to focus on the race and ignore it. Suddenly, the road appears to be breaking off and falling away behind them. Stevonnie then sees a vision of Kevin's face but with large, glowing eyes. Stevonnie screams and turns away before blacking out, unfusing in the process. After Steven and Connie decide to finish the race, but for themselves instead of beating Kevin together they refuse and Stevonnie continues to drive. They go after Kevin and catch up with him, who begins to taunt them again.

Kevin is confused that Stevonnie is not getting angry at his comments, and Stevonnie eventually races in front of him. Stevonnie notices the beautiful view of Beach City as they drive by it, but Kevin turns on his booster rockets so he would win. Kevin rubs it in Stevonnie's face that he won, but Stevonnie puts out their hand, wanting to shake hands for a good race. When Kevin denies, Stevonnie says that he was right about the beautiful view of the mountain. Kevin tells Stevonnie not to teach him a lesson because he had just won. Stevonnie then adds that second place is not so bad for their first time driving. Stevonnie gets in their car and drives away. Kevin runs after the car, desperately telling Stevonnie that they are obsessed with him, but Stevonnie ignores him and keeps driving.

Stevonnie, like all fusions, appears to possess both super-human strength and agility although in very modest quantities; nowhere near the capabilities of even a non-fused Gem. This is evident by the fact that their dance moves during the rave would require degrees of strength and agility above that of a human and more similar to that of a Gem.

This is most likely a result of Steven, being a Half-Gem, inheriting a fraction of his mother's super-human strength and agility as he is occasionally shown to be capable of feats of strength which would be impossible for a human boy of his age (such as forcing the possessed breakfast monster into the pool of lava in "Together Breakfast", and tearing an arcade machine apart with his bare hands in "Arcade Mania").

Stevonnie's gem is placed where the navel would be, as with Steven and Rose Quartz. It has a pentagonal facet. 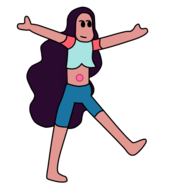 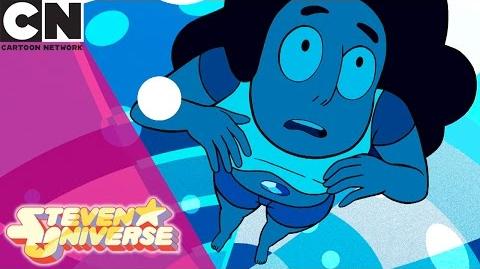 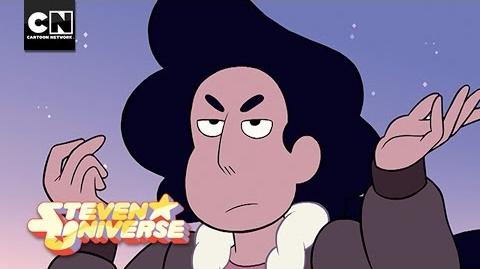 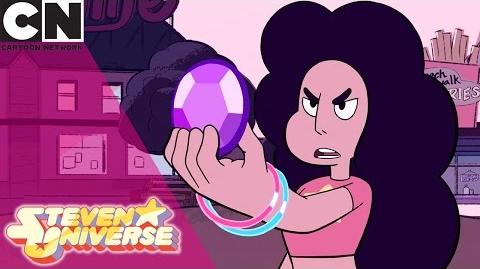 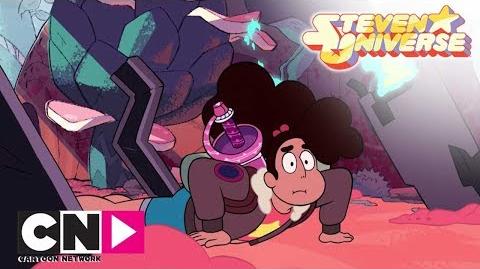