Future Leader of The Western Pack

Unique sense of smell
Spin Out

Stinky is one of the protagonists of Alpha and Omega sequels.

He is first child of Kate and Humphrey's three pups. He is older brother of Claudette and Runt.

He is voiced by Kate Higgins.

He has grey and white fur, and he has blue eyes like his father Humphrey.

Stinky's personality is similar to his mother's; he is an alpha that wants everything to be perfect and be successful during hunts. He also seems a little aggressive and ambitious. 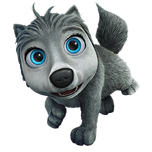