To help his friends in every adventures

He was voiced by Christopher P. Walberg in original series, first movie and Jet Jurgensmeyer in The Jungle Movie also voices young Guapo from Ferdinand.

Stinky is best known for two things: his Southern drawl, and his constant use of the words "bites" (usually with "this" or "this really" put before it) and "I reckon" put before his opinion. He's also the class "ladies' man"; he's claimed to be in love with Helga, Gloria (both in Helga's Boyfriend), and Lila (in Ms. Perfect). He lives in a home which can best be described as a cabin.

Stinky has shown to maintain his principles overpower or profit, seeing he turned down a chance to make a million dollars as the Yahoo Soda span "spokeskid" and retired as a child actor because he realized they only wanted him because people would gawk at his "hick" ways. Additionally, he has some talents, which include growing large pumpkins and playing the Alpenhorn (School Dance). Note that "Stinky" is his real first name. As revealed in Helga's Show, he has a love for lemon pudding. In Arnold Betrays Iggy, it revealed he tells his classmates every morning why lemon pudding is his favorite pudding.

He is a tall, Caucasian male, with short, light-brown hair, large ears and an enormous pointed nose, who often has a vacant expression on his face. He wears an olive green t-shirt, blue pants and black shoes with white soles and toes, and in the first two seasons and intro, he wore spiked black wristbands.

Stinky's family consists of his parents, his Uncle Stinky, his Aunt Stinky, and his grandparents, who are most likely deceased. His mother is only shown twice in the series.

Squeaky Peterson, who can be seen in the episode False Alarm, is presumably Stinky's cousin, due to their similar features and same surname. Stinky also has another cousin named Stinky who attends P.S. 119 and was mentioned in the episode Fighting Families.

Stinky had a crush on Helga in "Helga's Boyfriend". The relationship began as Helga paying Stinky a Mr. Nutty candy bar a day to make Arnold jealous. After Stinky messed up in his date with Helga in the library, the skating rink, and the park, Helga decided she had enough of Stinky and fired him. Stinky then realized he liked her and hoped she would like him back. After his rejection and subsequent meeting with Gloria, he took Gloria on a date to the movies, and Helga was surprised and somewhat jealous of Stinky's newfound love, although her jealousy quickly subsided in place of her love for Arnold.

After Stinky had his advances towards Helga rejected, he came across Gloria at the water fountain at school, and it was love at first sight. Although at some point it appears they broke up, as Stinky seems to be infatuated with Lila later on in the series.

He is shown to have a crush on Lila, among others. 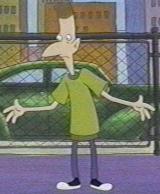 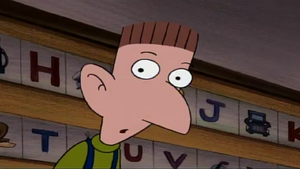