Deity
Storkules is one of the characters in the 2017 reboot of DuckTales series. He made his debut in the Season 1 episode The Spear of Selene!

He is a tall, muscular stork with flowing blonde hair. He wears a gold silk tunic, bronze bracelets and sandals.

He is voiced by Chris Diamantopoulos, who also voices Darkwing Duck and Mickey Mouse.

Storkules is one of the greatest heroes of Greek mythology. Nevertheless, he is a friendly sort who counts Donald as his best friend.

Storkules is an boisterous stork who takes pride in his acts of heroism. Likewise, he is willing to make friends outside of Ithaquack, especially Donald Duck. However, he is clearly having trouble adapting to the modern world, not knowing what a stove is and mistaking Huey for a baby harpy when the latter puts on a harpy mask. 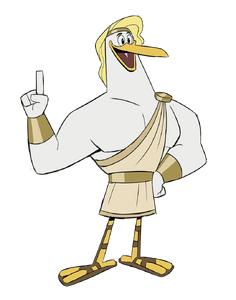