The Thu'um (Ulfric and the Dragonborn only),

Resistance to the Cold

The Stormcloak Rebellion (or just the Stormcloaks for short) are a faction featured in The Elder Scrolls V: Skyrim. Led by Ulfric Stormcloak, they directly oppose the Thalmor and the Imperial Legion. They believe Skyrim should be its own independent sovereignty, and oppose the Imperials trying to manipulate the land by means of the Thalmor.

The Stormcloaks believe Skyrim should secede from what they feel is a corrupt crumbling Empire. This stance came about due to the aftermath of the Great War and the imposition of the White-Gold Concordat by the Aldmeri Dominion.

The Stormcloaks consider the Empire as just a puppet of the Thalmor because the Empire surrendered during the Great War and accepted the Dominion's terms of surrender. These terms ban the worship of Talos, which most Nords do not support.

Many are outraged at this Talos ban and point out the Markarth Incident, as an example of the Empire publicly supporting the Dominion's oppressive influence over Skyrim. Furthermore, their opinion of the Empire is exacerbated with the arrival of the Thalmor Justiciars, who have been granted the authority by the Empire to enforce the White-Gold Concordat within Skyrim.

The Stormcloaks believe they should not have to divert Skyrim's resources to rebuild a diminished Empire too weak to provide the functions of a just government and is under the Thalmor's thumb. Some think that the Empire is maintaining power in Skyrim by propping up loyalist Jarls.

Many Stormcloaks have also begun to resent the imposition of what they believe are, Imperial-sanctioned High Kings, who can only act as figurehead puppets and not kings of merit. With so many grievances, the Stormcloaks have concluded that political independence is what's best for Skyrim, since it frees them from the Empire's detrimental policies and allows the natives of Skyrim to determine the fate of their homeland.

Though there is much uncertainty that goes hand in hand with their revolutionary aspirations, the Stormcloaks believe that they will remedy Skyrim's wretched state and preserve their Nordic way of life.

Their origins of this rebel group date back to the White-Gold Concordat, which banned the worship of Talos. As a means to make sure these laws are regulated, the Thalmor track down any Talos worshippers and imprisoned them. The Nords, who often revered the what they believe as the Ninth Divine, found this law to be outrageous, and as a result start rebelling against the Empire.

The death of High King Torygg at the hands of Ulfric Stormcloak in 4E 201 was the main spark of the Civil War.

To become a Stormcloak, the Dragonborn must travel to The Serpent Stone and slay an Ice Wraith located there by instructions of Galmar Stone-Fist. After successfully slaying the Wraith, the Dragonborn is formally inducted into the Stormcloaks.

Once the Dragonborn has joined the Stormcloaks, they will then begin planning on the rebellion, they attempt to convince Balgruuf the Greater of Whiterun to join the Stormcloaks. This ultimately fails, and Ulfric considers this act of war against him, and as a result, they invade Whiterun, and overthrow the Jarl. Afterwards, the Stormcloaks begin retaking or convincing each other hold one by one until only Haafingar, where the capital city of Solitude and the province overall, remains. Their, they ultimately defeat and kill General Tullius and Legate Rikke, as well as swear Elisif the Fair under oath of Ulfric, and thus effective ending the Civil war. Soon afterward, the moot will meet, and make Ulfric the new High King of Skyrim.

Alternatively, the Dragonborn can side with the Imperials and bring an end to the rebellion.

Amongst the terms of the Concordat was the outlawing of the worship of Talos, and, after the Markarth Incident, the Thalmor were given permission to enforce the ban. This angered many Nords, as Talos was highly revered among them and was considered to be their greatest leader, and that banning his worship was blasphemous.

The Markarth Incident is considered to be the initial conception of the Stormcloak Rebellion. In 4E 176, Ulfric Stormcloak and his army retook the city of Markarth from the Forsworn invaders, under the agreement from the Jarl of Markarth that in exchange for Ulfric's military aid, Talos worship would be permitted in his city. However, shortly after retaking Markarth, the Imperial Legion returned to Skyrim in the aftermath of the Great War, but was pressured by Ulfric's militia to permit the free Talos worship in Markarth that was agreed upon by Ulfric and Markarth's Jarl.

The Legion capitulated to Ulfric's demand but soon broke the agreement due to pressure from the Aldmeri Dominion. Thus, Ulfric and his militia were arrested and incarcerated. During Ulfric's imprisonment, his father, the Jarl of Windhelm, died, and Ulfric was forced to deliver the eulogy by a letter he had smuggled out of prison. Upon his release, he returned to Windhelm, took up duties as Jarl, and began his rebellion.

The event that escalated the rebellion across Skyrim was the death of High King Torygg at the hands of Ulfric Stormcloak in 4E 201. After years of brewing resentment for what he believed was betrayal by the Empire, Ulfric, now Jarl of Eastmarch, challenged Torygg to a duel in order to take the throne.

Ulfric and his supporters claimed it was a formal duel in the "Old Nord Way". Many others in Skyrim, such as General Tullius, called it murder due to Ulfric's use of the Thu'um, which gave Torygg no chance of victory.

After Torygg's death, Ulfric fled to Windhelm, and Skyrim's civil war worsened. Using a combination of the outlawing of Talos worship and the Nords' strong sense of nationalism along with their mistrust of the Empire and the Aldmeri Dominion, Ulfric successfully recruited a great many of Skyrim's populace to the rebellion. All of the hold governments of the four Old Holds declared for Ulfric, as well as many wanderers, workers, sellswords, warriors, soldiers and former soldiers.

if the Dragonborn followed Ralof to Helgen Keep during the quest "Unbound", then Ralof will invite Dragonborn to join the Stormcloaks. Likewise, randomly encountered soldiers might have also attempted to recruit the Dragonborn to their cause. Farmers met on their way to Windhelm to join with Ulfric can also start the process.

To become a Stormcloak, the Dragonborn must venture to Windhelm, seat of Jarl Ulfric Stormcloak. There, his second-in-command, Galmar Stone-Fist, tests the Dragonborn to ensure both battle-worthiness and devotion to the Stormcloak cause. He asks the Dragonborn to travel to an island northeast of the College of Winterhold, where The Serpent Stone is located, and slay an Ice Wraith.

After doing so, the Dragonborn returns, where it is revealed that slaying the Wraith was as much a test of prowess in battle as it was a test of loyalty, because finding the island and killing an Ice Wraith residing on it is dangerous and difficult. As a new member, the Dragonborn receives the customary Stormcloak Armor.

Once the Dragonborn has joined the Stormcloaks, only one more opportunity remains to switch sides, leaving the Stormcloaks for the Legion. When the Jagged Crown has been acquired, the Dragonborn can choose to travel to Solitude where they can give the crown to General Tullius instead. Tullius will then recognize them as an Imperial Soldier and immediately orders them to deliver an important message to Whiterun, while skipping the formalities of making the Dragonborn swear the Imperial Oath.

Five titles can be earned if the Stormcloaks are joined during the Civil War questline. Progress in rank occurs at the completion of key battles during the war.

Stormcloak Soldiers fight using coordinated assaults, with its infantry members relying on their "Shield-Siblings" to defend them as they attack. The Stormcloaks are known to use the shield wall formation, a tactic that has the soldiers stand shoulder to shoulder and form a "wall of shields", holding their shields so that they abut or overlap. Each soldier benefits from the protection of their neighbors' shields as well as their own.

The typical Stormcloak soldier uses a bow and arrow for ranged attacks, and a melee weapon with optionally a shield, while fighting in the frontlines. During sieges, they employ flaming catapults to whittle away at a city's ramparts and fortifications, while the infantry storms the gates and tears down the enemy barricades. The Stormcloak soldiers' faith in Talos and the righteousness of their cause motivates them to fight with both ferocity and courage.

They are mostly non-regimental, not relying entirely on rank as the Imperial Army does; instead relying on the talent of the Nord warriors in their midst to achieve their goals. The Stormcloaks theoretically have weaker defensive, but stronger offensive capabilities than the Legion; their use of armor is lighter and thus not as tough, but the Stormcloaks use a wider variety of weapons to make up for this. 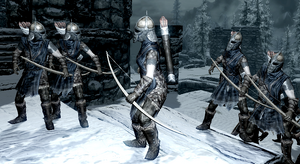 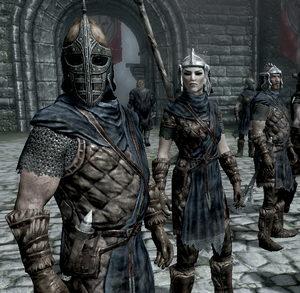 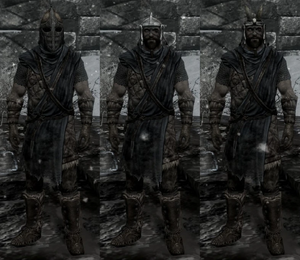 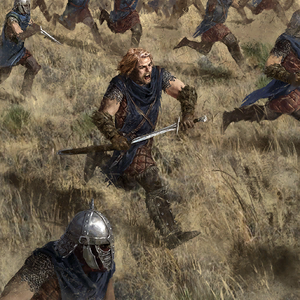 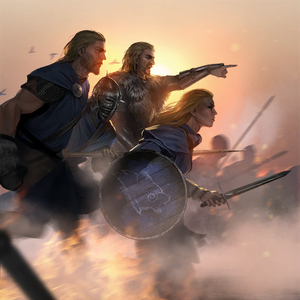 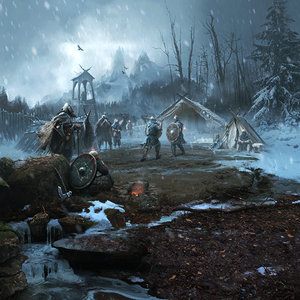