Winning the Dragon Races with Astrid.

Flying with Astrid and doing acrobatic tricks with her.
Splashing her feet in the water.
Roaming with Toothless.
Horse-playing with Garff.

Protect Astrid at all costs (succeeded).

Help fight against the Red Death, Drago Bludvist, and Grimmel the Grisly (succeeded).

Stormfly is one of the two dueteragonists (alongside Astrid Hofferson) of the How to Train Your Dragon franchise. She is Astrid's sidekick and best friend.

Stomfly is a Deadly Nadder dragon, being mostly blue with a white underbelly. She has long horns on her frill, a curved spike on her nose, sharp teeth sticking out of her mouth, and long wings, with a yellow underside and one hook on each wing. Stormfly's tail spines are mostly blue with yellow tips on them, and she also has yellow eyes. She also has big feet which are blue with short toes and long talons.

Stormfly is brave, noble, and kind-hearted. Despite being a deadly dragon due to her abilities, she is reluctant to kill, and is very protective of her rider and best friend, Astrid. She is also willing to put herself in harm's way to save others, as she protected Garff from the Slitherwings, and did the same to Eret from Drago Bludivst and his men later on. In Dragons: Race to the Edge, it's shown that Stormfly loves to splash her feet in the water, as shown near the beginning of the Season 5 episode Snuffnut, despite being a dragon that breathes fire. However, she doesn't like it when someone touches her on her "blind spot".

Stormfly was one of the dragons who was stealing the flock from the Vikings and feeding them to the Red Death out of fear. She was then captured by Vikings and taken to Viking training where vikings are trained to kill dragons.

After Hiccup Horrendus Haddock III (one of the franchise's two main protagonists, alongside Toothless) and Snotlout Jorgenson train Hookfang, Astrid takes Stormfly as her dragon. They help Hiccup and Toothless fight off the Red Death, with Toothless later killing off the Red Death, but with the loss of Hiccup's left leg. Eventually, vikings and dragons are able to coexist in peace in Berk.

Stormfly reappears in this film, and first appears when she wins the Dragon Races with Astrid. Later on she plays with Toothless while Hiccip and Astrid talk. Later on, Hiccup, Toothless, Astrid, and Stormfly find Eret's fortress where dragons are trapped, which has been severely damaged by Valka's Bewilderbeast. Eret and his trappers try to capture them, but fail.

Astrid then does acrobatics with Stormfly, and the latter grabs Eret in her talons. Astrid tells her tricks such as "drop" and "fetch". Eventually, Stormfly protects Eret from Drago Bludvist's henchmen, whom he orders to kill Eret. However, she is tranquilized and captured. Eret later frees her because she protected him from Drago's henchmen. However, she and the other dragons are forced under Drago's Bewilderbeast's control after the massive dragons murders Valka's Bewilderbeast.

Stormfly then reunites with Astrid, and after Hiccup is made the new Chief of Berk after Stoick's death, she and Astrid got 2nd place while Toothless and Hiccup got 1st place in the Dragon Races. 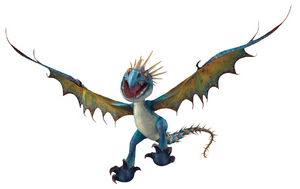 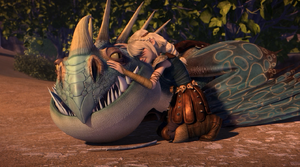