The S.C.A.R., an acronym for Strategic Combat and Rescue, is an elite peace force featured as a heroic organization in Razing Storm and Time Crisis: Razing Storm, where the playable characters are only referred to as "Alpha 1 & 2". Their main task is to capture or assassinate Paulo Guerra, the leader of rebels, who masterminded an attack on the United States of America.

This version's story takes place in 2030, with a special forces unit in a massively destructible environment to battle futuristic terrorists and renegade soldiers in Mogadishu, the capital city of Somalia, which is under a bloody revolution as part of them, sent to capture the mysterious leader of the aggressive rebels, Paulo Guerra, who takes an attack on the United States of America.

Guerra's schemes are shrouded in mystery, as much of his doings are unraveled. 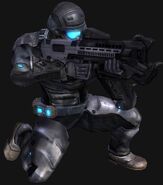 Leader of the Delta Team known as Casey (Zack in the Japanese version).

Retrieved from "https://hero.fandom.com/wiki/Strategic_Combat_and_Rescue?oldid=1799800"
Community content is available under CC-BY-SA unless otherwise noted.