To find the legendary One Piece.

Aid Luffy to become the pirate king.
Take on World Government and come out on top.

The Straw Hat Pirates are the protagonists in the series One Piece and are led by the main protagonist, Monkey D. Luffy. The "Straw Hats" are named after Luffy's signature straw hat that was given to him by Red-Haired Shanks.

Despite having a small number of members, the Straw Hats are a very powerful crew. Their captain has continuously defeated people who are renowned for their incredible strength such as Crocodile, Gekko Moriah and Donquixote Doflamingo of the Shichibukai, the highly feared tyrant Enel from Skypiea, and the infamous Rob Lucci of the CP9. The crew itself has done things which most would think impossible and completely insane like defeating an entire organization (such as Baroque Works, CP9 and the Donquixote Pirates), punching a World Noble and breaking in and out of the judicial island, Enies Lobby. In fact, after the incident that occurred at Enies Lobby, the World Government has labeled them as a very dangerous crew since their actions endangered the balance of the Three Great Powers.

All of them have at least one talent at which they are virtually perfect at and each member is, more or less, a formidable if not downright fearsome fighter in their own right. While all of them have amazing strength in one way or another, three of them, the captain, the swordsman, and the chef, have such astonishingly inhuman strength that the rest of the crew have dubbed them the "Monster Trio".

Each member in the beginning has some fairly high fighting abilities, but as they progress, each member has had to become stronger due to each opponent they encounter either being significantly stronger than the last or having required them to develop new skills or techniques to combat new opponents.

Two of the Straw Hats greatest attributes are their charisma and unpredictability. With their extremely friendly personalities, they manage to make all the right friends in all the right places, which eventually accomplishes their goals (though it was never their original intention). These friends and allies have proven to be useful depending on the location or objective, and thus the Straw Hats seem to have no regrets fighting for their sakes given the circumstances, and vice versa. Due to this, and the Straw Hats reputation and impressive bounties, there are many laymen who believe the crew is made up of hundreds, if not thousands of members. They also tend to act upon their emotions, throwing normal logic out of order. By using the freedom granted by their status as pirates, they tend to act erratically, either helping people, or picking a fight, simply because it is something they wish to do. Both these attributes have been shown to destroy the carefully laid plans of criminal masterminds with large influential organizations, which took them years to cultivate, like those of the three former Shichibukai (Crocodile, Gekko Moriah and Donquixote Doflamingo), as well as the former 'God' of Skypiea, Enel.

Overall, their most unique strength is the fact that the Straw Hat crew, on many occasions, are extremely lucky, being able to achieve many things that would be considered impossible feats. This includes various wild escapes from Marine captures and ambushes; confronting, defeating and escaping Shichibukai and World Government led organizations with no casualties; managing to reach Skypiea via the Knock-Up Stream without losing anybody while simultaneously escaping the Blackbeard Pirates, and escaping the flagship of a Yonko while badly damaging it in the process. In fact, some of these lucky accomplishments are considered miraculous in hindsight.

While each member can hold their own by themselves, what makes the Straw Hats truly strong is their teamwork, which has become more important as the series has progressed. When one of them is incapable of doing a task, another can help out in their place instead. This helps the crew very much in facing odds that may be too much for them if they work separately.

When at sea, the Straw Hats tend to be relaxed, playing with each other, training, reading or whatever else they may do to occupy themselves. They can maintain this attitude even in the unstable waters of Paradise, New World or even in their descent down to (and ascent from) Fishman Island. However, whenever a crisis pops up, like storms, tidal waves, large sea life or falling ships, the crew instantly snap out of their relaxed state and swing into action. They all seem to know their place and will do what they should in the circumstances. Most of the time though, they tend to sail at a casual pace, without rushing.

After the two year time skip, even though they have been dormant for some time, the Straw Hats are talked amongst pirates on a legendary level. Even Sentomaru casually comments that pirates are not like what they used to be. He calls the impostors of the Straw Hats a wasteful trash when Demaro Black boasts of his lineage in front of him, prompting Sentomaru to take him down with a single blow of his axe, and then saying that the real Monkey D. Luffy would never have done so.

The crew has gained legendary status since they first set sail, on par with all the other major crews of the world, even the Blackbeard Pirates. They are currently the only known pirate crew to openly wage war against the World Government and have practically gotten away with it. It still stands that they are the only pirate crew to have escaped from every branch of law enforcement that the government could throw at them; the Shichibukai, Cipher Pol, Impel Down, and Marineford have all failed in their attempts to hold down the crew (with the captain penetrating and escaping from the latter twice by himself). Perhaps as a testament to their strength, they are the only known crew where every single member has a bounty on their head.

When news of them resurfaced, the entire Marine organization was thrown into a frenzy to stamp out their revival whilst the rest of the pirates cheered on. It is possible that their fame had led many to join the ranks of piracy, for when the fake Straw Hats started recruiting pirates, many flocked to join up, and were also greatly shocked when the "Monster Trio" gave a show of a small fraction of their power.

By the end of their two-year long training, it could be presumed that the Straw Hats have grown exponentially in individual power, as some of them took their self-imposed training under the tutelage of prominent figures of the sea like Silvers Rayleigh, Dracule Mihawk, Emporio Ivankov, and Monkey D. Dragon. Each member of the Monster Trio (Luffy, Zoro and Sanji) have shown to be able to defeat a Pacifista in a single attack, whereas it took the combined efforts of the entire crew to barely beat one before. Luffy easily destroyed a Pacifista with a single Haki-embedded Jet Pistol as well as Zoro and Sanji, the latter using his Diable Jambe, both dealt crippling blows to a Pacifista with raw strength. Zoro and Sanji each used attacks that likely would have been sufficient to destroy the Pacifista on their own, had they not been trying to outdo each other.

Another example of the Monster Trio's strength is that they were able to defeat a sea monster such as the Kraken (a creature several times larger than the Thousand Sunny itself) without much of an effort underwater, where all their strength is greatly decreased. Afterwards Zoro, Nami, Usopp, and Brook defeat all the troops stationed in the Ryugu Palace with ease. The crew also easily took out the 100,000 lower members of the New Fishman Pirates which consisted of about 70,000 fishmen and 30,000 humans with Luffy alone taking out about 50,000 people with a single burst of Haoshoku Haki.

In addition to their strength, the Straw Hat Pirates have entered into an official alliance with Trafalgar Law and his Heart Pirates with the goal of defeating Kaido. The Straw Hats have also established unofficial, and temporary alliances with other pirates, non-pirates, and sometimes Marines and royalty when fighting against powerful enemies, but they gain a permanent friendship with their allies when they came to their aid and support them on several occasions whenever they cross paths. Even the supposedly weaker members, Nami and Usopp, became strong enough to take down the fighters of the Donquixote Pirates; (who are both Devil Fruit Users) Buffalo and Baby 5, all by themselves. During the Zou Arc, the Straw Hat Pirates and the Heart Pirates have formed an alliance with the Mink Tribe and the Kozuki Family of Wano Country in order to help bring down not only Kaido, but the Shogun of Wano as well, making the alliance even more powerful.

Following the battle with the Donquixote Pirates, the Straw Hats' allies who participated in the battle organized themselves into seven divisions and formed the Straw Hat Grand Fleet which numbered a total of 5640 members, giving the Straw Hats significantly larger amounts of manpower similar to the Whitebeard Pirates. 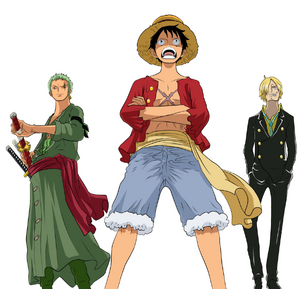 Monkey D. Luffy, Roronoa Zoro, and Sanji are the three strongest members of the Straw Hat Pirates. They are capable of defeating an army of pirates, marine soldiers, giant monsters, and are able to destroy three Pacifistas when it took the entire crew at their best to only defeat one two years ago. 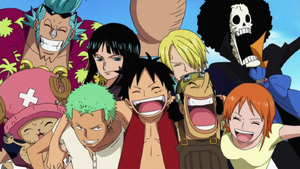 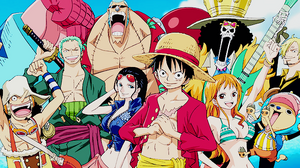 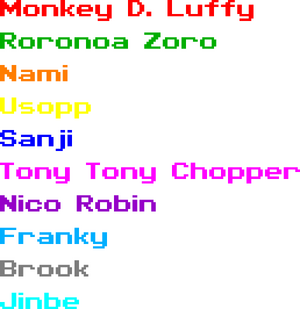 Add a photo to this gallery
Retrieved from "https://hero.fandom.com/wiki/Straw_Hat_Pirates?oldid=1610707"
Community content is available under CC-BY-SA unless otherwise noted.