Collecting lux to help the Dandelions

Being with her brother
Stalking Player

Collect Lux and help her Union within the Dandelions

Strelitzia is a character from Kingdom Hearts Union χ. She was the original Keyblade wielder chosen by Master Ava to be the fifth leader of the faction called the Dandelions during the First Keyblade War. She was very interested in the Player character, always watching from afar, wishing to talk and become friends with Player. She is later revealed to be Lauriam's little sister.

During the age of fairy tales, Strelitzia is a Keyblade wielder living in Daybreak Town and a member of one of the 5 Unions that work collecting light in the form of Lux, in which each Union is led by one of the Foretellers. With the day of the prophesied Keyblade War approaching, one of the Foretellers, Master Ava, was assigned by the Master of Masters to choose Keyblade wielders to create a separate faction called the Dandelions that would move on to another world in order to avoid the light to expire as foretold in the Book of Prophecies. Strelitzia was one of the members of the Dandelions chosen by Ava.

Strelitzia was a very quiet and shy girl. While working on her missions, she noticed the Player character after they crossed paths several times. She started to admire and wish to talk to Player, but she never had the courage to do it. But after watching from afar for so long, even if they never talked to each other, Strelitzia regarded Player as someone she knew and that was precious to her, and she hoped that someday they would be able to talk so they could be friends.

One day, Master Ava approached Strelitzia and gave her a rulebook with instructions of what to do after the war. As the Dandelions would have their own 5 Unions with their leaders, each chosen by Ava herself, Ava told Strelitzia that she had chosen her to be one of the new leaders. At first, Strelitzia is nervous about being the new Union leader because it is an honor but also a great responsibility. But when she remembers Ava saying that after the war, the Dandelions would be the only survivors and everyone else in the world would disappear, she suddenly recalls that Player is not a Dandelion. Strelitzia starts to panic, thinking on how she would find and tell Player about this. Her Chirithy reminds her that Ava asked to not tell anyone about anything. Despite this, Strelitzia decides to meet and recruit Player to the Dandelions.

On the next day, Strelitzia and her Chirithy go to the Fountain Plaza, which is a place that Player visits frequently. While they are waiting, they decide to check inside a building that her Chirithy claims to have seen Player nearby a few moments earlier. Inside the dimly lit building, they don’t find Player, but Ventus, seemingly being controlled by Darkness, comes out from the shadows. He attacks Strelitzia and her Chirithy before stealing her rulebook, leaving them both to die. During their final moments, Strelitzia apologizes to Chirithy for not being able to protect him and saying that it was all her fault that they’ve ended up in this situation. Strelitzia’s final thoughts are on how she wished she had the courage to talk to Player before.

Later, Strelitzia appears in a dream her brother Lauriam has after being knocked out by Maleficent, in which she tells him about her uncertainty about whether to join the Dandelions, her desire to befriend Player, and her will to become stronger so she and Lauriam could work together on missions. But then she disappears while Lauriam's back is turned to her and reappears in front of him wearing a white hood and with a darker skin tone before floating into the air. The meaning behind Strelitzia's hooded form is currently unknown. 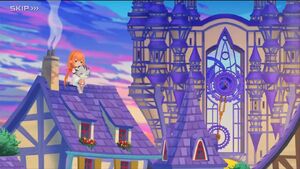 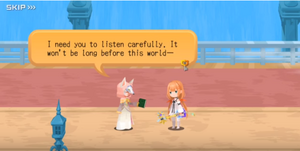 Master Ava tells Strelitzia that the world will end soon. 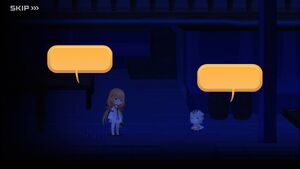 Strelitzia and her Chirithy looking for Player in a dimly lit building.

Strelitzia and her Chirithy are attacked by an unseen person (later revealed to have been a Darkness-controlled Ventus). 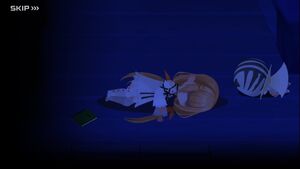 Strelitzia and her Chirithy fatally injured. 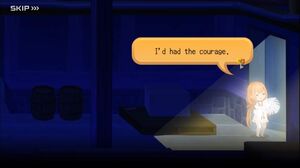 Strelitzia wishing she'd had the courage to talk to Player right before she dies.

Strelitzia and her Chirithy's death. 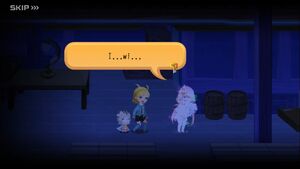 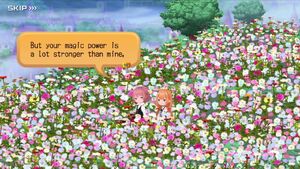 Strelitzia and her brother, Lauriam. 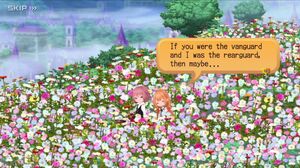 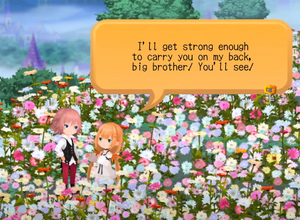 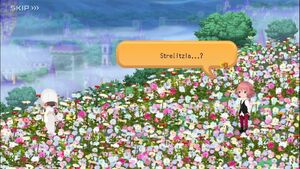 Strelitzia dressed in a white hood with a darker skin tone. 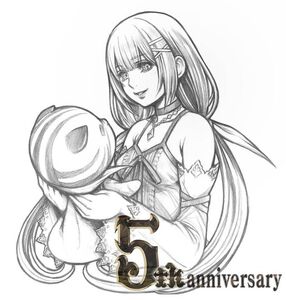 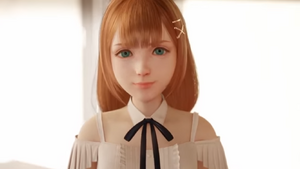 Strelitzia as she appears in the Kingdom Hearts IV trailer. 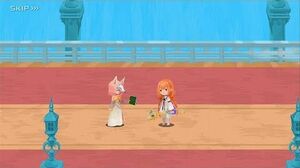 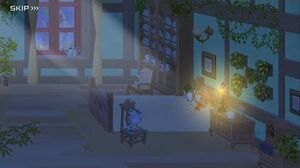 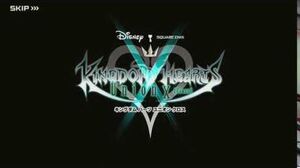 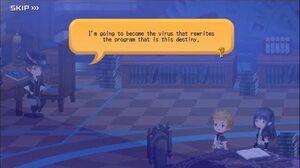 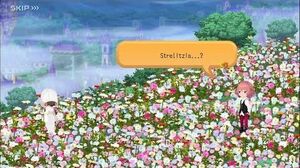 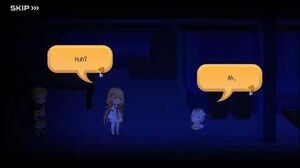