Like Geshumaru, Strength uses mechanized weaponry. Her arms are made up of two huge mechanical arms called "Ogre Arm". She has a robotic tail with a vertebrae-like design that can move freely and her feet are metal stilts. She has a black hood with white flames on it and white ribbons at the base of her tail and knee highs. She has brown eyes, tan skin, and short white hair as well.

Strength's appearance in the OVA is nearly identical to how she appeared in her original concept. Unlike in huke's artwork, however, in the OVA, Strength's eyes are hazel (with the circular pattern akin to all "other selves") instead of white. The reason for this change is unknown, but it is very likely done to give a connection point to Yuu, as she is the only other character with hazel eyes and eyes are used as a connection point for "other selves".

In the 2012 anime, Strength has some notable changes from her OVA appearance and her original concept. The most notable of these changes would be her eyes, which are now bright orange instead of hazel/white. Other changes include the white flame pattern on her hood; the pattern is more "wild", and her hood has a white zipper. Her fist symbol on the left of her dress is not present anymore. Her tail is more larger and scorpion-like. Her suit is now more of a dress with a white rim, and her black kneehighs are now white. There are also black flames on her arms at the base of where she wears her Ogre Arms.  In Episode 7, it is revealed her eyes were originally white, just like her original concept. After she gained emotions, her eyes then turned bright orange.

Her appearance is very similar to Strength in the OVA and Anime. She has white hair, a black hood, dress, gloves, and boots as well as a short tail. Su-san doesn't always have Strength's robotic arms but there are a few times that she does.

Su-san has a very quiet attitude but loves playing. She doesn't talk very much.

She is shown approaching Black★Rock Shooter and Dead Master in their battle (but in a different part of the Otherworld), while at the same time Yuu's feelings of being "left out" grow darker.

She is first introduced in Episode 4, in which she is seen dragging the beheaded Chariot behind her, and then throwing the body off of a cliff, after which the red eyes of Black★Gold Saw start appearing in the sky. Later, while dreaming Mato briefly sees Strength standing in the same area where she was before, but does not take much notice because the scene quickly changes.

However, Insane Black★Rock Shooter again gains the upper hand. Strength fights back using machine guns and gatling guns in her Ogre Arms, but is again overpowered. She then seems to go insane and seems to enjoy getting hurt; she even activates all of the Insane Cannon Lance's vulcans at once to injure herself. The world they are fighting in is consumed by fire and "Strength" reveals herself to be the real Yuu, and Strength is the Yuu that Mato befriended. She then activates two more Ogre Arms on her back and easily beats Insane Black★Rock Shooter, throwing her onto a ledge. Meanwhile, the real Strength reveals how the two came to switch places to Mato.

Strength's main weapon is the Ogre Arm. This pair of mechanised arms allow her to punch her opponents with great strength (enough to knock Insane Black★Rock Shooter several yards and into various objects) and break open the floor of the other world to access new areas. Despite her seemingly heavy weaponry, Strength is fast enough to beat down Insane Black★Rock Shooter and evade her attacks. Strength can also change her arms to become machine guns or gatling guns, which have an extremely high rate of fire. She can also deploy at least two more arms from her back. Strength also shows the ability to alter the other world, similar to Black★Gold Saw. A good example of this is during her fight with iBRS; she teleports and switches places with a large block to strike iBRS from behind.

Her secondary weapon is her mechanical tail, which she uses when her arms are preoccupied. The tail can extend a short distance and is powerful enough to break Insane Black★Rock Shooter's Insane Blade Claw.

Strength in the Otherworld.

Comparison between Strength and XNFE. 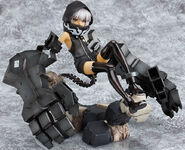 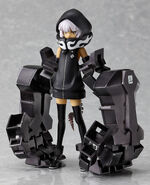 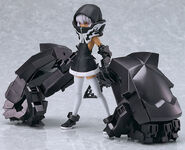 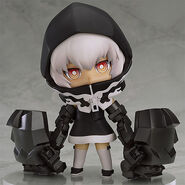 Add a photo to this gallery
Retrieved from "https://hero.fandom.com/wiki/Strength?oldid=938887"
Community content is available under CC-BY-SA unless otherwise noted.