Strider Hiryu (ストライダー飛竜, Sutoraidā Hiryū?, "Hiryu") is the main protagonist of the Strider series. Having been created as part of a joint project between Capcom and manga studio Moto Kikaku, the character Hiryu is jointly owned by both companies. The Striders are a fictional group of ninja-like secret agents who specializes in kidnapping, demolition, assassination and other specific tasks. Hiryu himself belongs to the ”Special A” class, the highest title given by the organization.

He is usually wearing a blue-colored ninja outfit and wears a large red scarf that hides the lower half of his face. Before the game was released, the Strider Hiryu manga was serialized in a manga magazine called Weekly Comic Comp. The series was illustrated by Tatsumi Wada and was written by Tetsuo Shiba for Moto Kikaku. Capcom have been credited for the original concept.

In Japanese, he was voiced by the late Kaneto Shiozawa in Strider for the PC Engine, Kōsuke Toriumi in Strider 2 and the Capcom X series, notably Namco × Capcom and Project X Zone 2, and he has been recently voiced by Yūji Ueda in the Marvel vs. Capcom series since the first game except for his absence in Marvel vs. Capcom 3: Fate of Two Worlds.

In English, he was voiced by Marc Biagi and Mike Willette in the 2014 reboot of the original 1989 arcade game of the same name, with the latter providing his combat voice-over, and he has been voiced most recently by T.J. Storm, who has voiced him since Ultimate Marvel vs. Capcom 3.

Hiryu is a young man with a lean and well-toned physique and brown spiky hair. Each different Hiryu sports a different eye color: brown (original), green (Strider 2) and red (2014).

Hiryu's standard uniform includes a bluish/lavender sleeveless Strider uniform resembling the clothing worn by ninjas in popular media, with the kanji for the first character of his codename (飛 - Hi) imprinted in red on the upper left of his chest. His most iconic feature is his long red scarf he uses in all his appearances save the original Arcade game. He uses it wrapped around the lower portion of his face as a mask, and in early documents he was also said to wear it as a sash. He also wears a large, loose metallic belt and a strap to hold his Climb Sickle behind his shoulder.

In the original manga he wore a worn-out uniform with a fishnet shirt underneath, a shoulderpad on his right, fingerless gloves and a metallic gauntlet on his right hand. He styled his hair in a ponytail at first, but later cut it short as a sign of his determination to avenge Sheena's death.

In the 2014 Strider version, Hiryu sports a hard-rubber armor consisting of a chest piece and chaps, colored like his normal uniform, and with a plate with the Hi kanji fastened to his chest instead of embedded. He no longer wears a cloth scarf, instead using a mask contraption covering his face and shoulders, from where a trail of plasma comes out resembling the flowing scarf.

Capcom and Moto Kikaku developed the Strider series together as a three-way project, intending on releasing a manga and two games: an action platformer for the Arcades and a non-linear action-adventure game for the NES home console. While the manga and NES game followed the same basic premise and story, the Arcade game strayed away from it and build its own story: while the manga and NES game follow Hiryu as he confronts an evil corporation bent on world domination and a corrupt group of Striders allied with them, the Arcade game has Hiryu sent on a mission to exterminate Grandmaster Meio, a mysterious being who has conquered the world through force.

The manga was released first during 1988 and later collected in a single volume, followed by the Arcade game in March 7, 1989. The NES game was cancelled in Japan, but saw release in America in July 1989. Following some minor cameos in other Capcom games, Hiryu made a resurgence in 1998 as part of the cast in Marvel vs. Cacom: Clash of Super Heroes, and his renewed popularity convinced Capcom to revive the franchise. Released at the end of 1999, Strider 2 was a a true sequel to the Arcade game set 2000 years after, in a decadent world populated by the Grandmaster's self-made humanity. Hiryu must not only face a ressurected Grandmaster and his followers but also Strider Hien, a former ally who betrayed the Striders to side with Meio. The game features the original 2D gameplay mixed with fully polygonal 3D graphics. Strider 2 was originally released on arcades and was later ported to the Playstation. It was released in a two game bundle that also included the original Strider. The bundle has become a collector’s item due to the fact that the disc with Strider 2 printed on it was actually Strider and viceversa.

The series remained dormant for 15 years outside of crossover appearances until 2013, when Capcom announced a new Strider game produced together with Double Helix Games. The game was released in 2014 for PlayStation 3, PlayStation 4, Xbox 360, Xbox One and PC through Steam.

Hiryu is a special agent known as a Strider. Striders are an elite team of ninja mercenaries as well as a secret organization specializing in kidnapping, assassination, demolition, and other types of missions that they have performed throughout history in service of the greater good. They are one of the world's most influential secret maneuvering groups, and are considered the descendants of the ninja from feudal Japan.

Little is known about Hiryu's past. He was born in a Tungus village in the year 2030, an orphan who never knew his parents. He was drafted into the Striders' hellish training program at a young age, and quickly achieved the top position in every category, displaying skills far superior to those of his peers. He became the youngest member in the group's history to achieve the highest rank in the organization, Special A Class. Hiryu favors the plasma sword Cypher as his weapon of choice, which he can freely use from any position.

In the year 2042, an evil alien supergenius by the name of Grandmaster Meio appeared and, in five years time, had taken over the nations of Earth, and exerts control over the human race with an iron fist and powerful militia. Having uncovered the secrets of life in the Amazon, Meio plans to construct his super city, the Third Moon, and cause a mass extinction event on Earth, seeing it as nothing more than his own plaything, and creating his own lifeforms to populate his new world. In 2048, A resistance force comes to the Striders to stop Meio's diabolical plans. Hiryu is tasked to take down Meio and his machinations.

2000 years after his defeat, however, the Grandmaster is ressurected into a world inhabited by his created lifeforms, and where he's worship as their god. The Striders assign Hiryu with the mission to eliminate him once again. This Hiryu is said to carry the same codename of the "Strider who defeated Meio" in the past, but any further connection between them is unknown. Shortly after the mission is given, however, the Striders are wiped out by the act of Strider Hien, a comrade and friend of Hiryu who released Meio from his burial chamber. Rather than lingering over his feelings for the organization, Hiryu decides to carry out the Striders' final mission even if this pits him against the entire world.

In this retelling of the classic Strider tale, Hiryu is the latest in a line of agents sent to assassinate Grandmaster Meio, a mysterious being who suddenly appeared on Earth and, after forging a large military force led by General Mikiel, took over the whole world. Before Hiryu, 11 other Striders were sent to infiltrate Kazakh City (Meio's seat of power) and kill him, but no one returned alive. In the year of "Meio 0048", Hiryu makes his move and infiltrates Kazakh City alone to carry out his assignment.

Hiryu appears in Namco x Capcom as one of the protagonists. Initially on a solo mission to eliminate Grandmaster Meio, he's finally convinced to join the group of heroes by Captain Commando, and assists them in their battle against Ouma and their villain allies.

Hiryu appears in Project X Zone 2 as one of the playable protagonists. He is partnered with Hotsuma from Sega's Shinobi series. Coming from the distant future through a wormhole, Hiryu joins the group of heroes in order to hunt down the surviving followers of Grandmaster Meio. 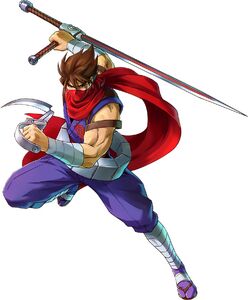 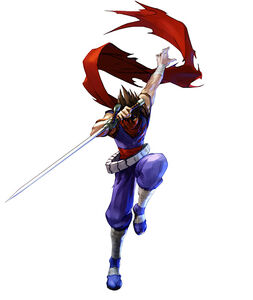 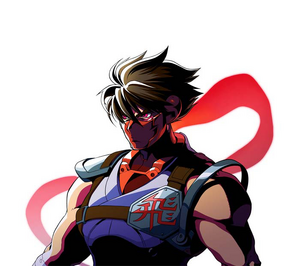 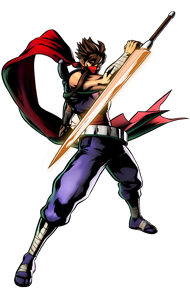 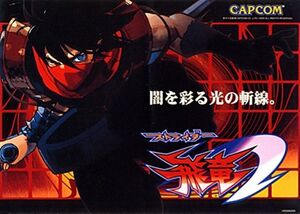 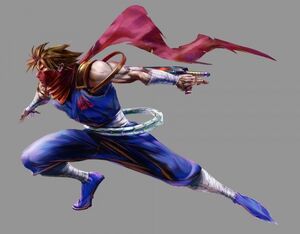 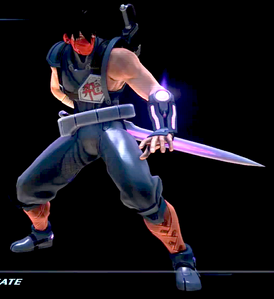 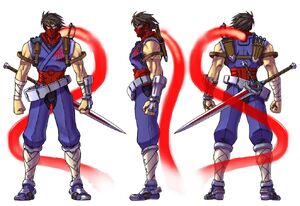 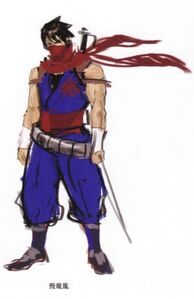 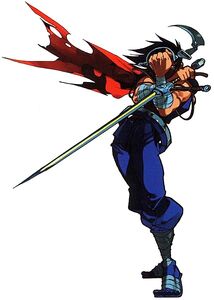 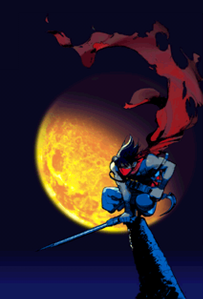 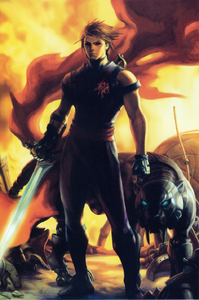 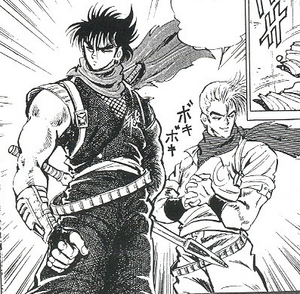 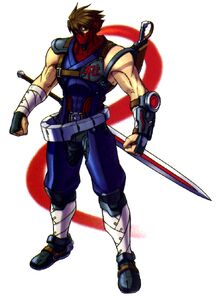 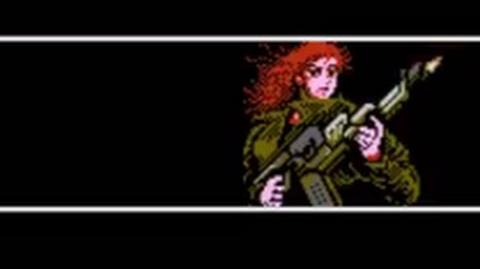 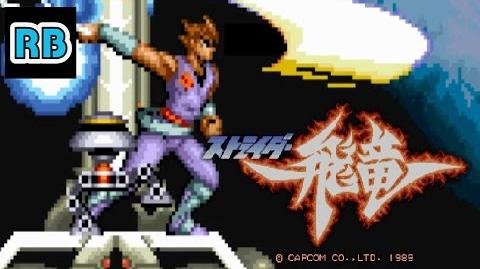 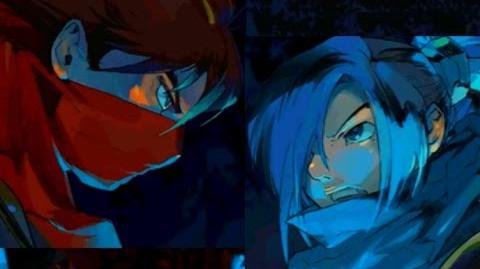 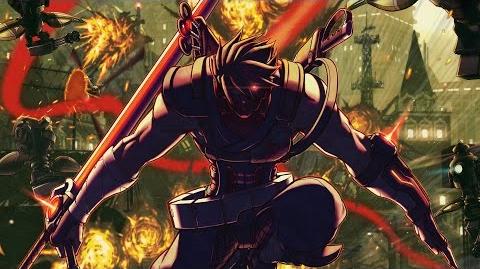 Retrieved from "https://hero.fandom.com/wiki/Strider_Hiryu?oldid=2017853"
Community content is available under CC-BY-SA unless otherwise noted.