Throwing organs (as an organ donor)

Stuart "Stu" Miley is the main protagonist from the 2001 film Monkeybone. He was portrayed by Brendan Fraser, who later played D.J. Drake in Looney Tunes: Back in Action.

Stu Miley is a disillusioned cartoonist whose comic strip features a rascal monkey named Monkeybone. Stu is in love with a sleep institute worker named Dr. Julie McElroy, who helped him deal with his terrible nightmares by changing his drawing hand. One night, Stu crashes his car after accidentally activating an inflatable Monkeybone raft, causing him to fall into a coma.

His spirit ends up in Down Town, a limbo-like carnival landscape populated by human beings, mythical creatures and figments of people's imaginations where nightmares are entertainment. In Down Town, Monkeybone is real. During that time, Stu befriends a catgirl named Miss Kitty. When Stu learns that his sister Kimmy is about to pull the plug on him, he asks Hypnos, God of Sleep, for advice. Hypnos tells Stu that to get back to the living, he has to infiltrate the Land of Death to steal an Exit Pass from Death which are given out to coma victims by Reapers giving them permission to leave Down Town and awaken from their coma. Stu successfully steals an Exit Pass, but Monkeybone steals it from him in turn and enters the Land of the Living in Stu's body through the Revive-O as Hypnos states that they have plans for Stu's body.

When Stu is locked up, Hypnos later visits the jail cells, where Stu finds himself locked up with Attila the Hun, Jack the Ripper, and Stephen King, who reveals his nightmare of Cujo pulled the same trick Monkeybone pulled on Stu. Hypnos explains to Stu that he plans to use Stu's body to get a chemical substance named Oneirix that Julie developed that gives people and animals nightmares, which gives him more power. Upon being sent to the institute by Hypnos upon reminding him of his mission, Monkeybone (in Stu's body) ends up successfully stealing the Oneirix, switching it with another juice. Monkeybone obtains the Oneirix and puts it inside stuffed monkey toys of himself (Monkeybone) so that those who touch them will be infected and given nightmares. With help from Miss Kitty, Stu escapes from his imprisonment.

Monkeybone in Stu's body prepares a pinata for the Monkeybone farting dolls at the party. Meanwhile, Stu reveals Hypnos' plan to Death upon capture and convinces her to send him back for only an hour, only to find himself in the body of a dead athlete organ donor. As he flees the morgue attendants, Stu finds out about Monkeybone's planned party and heads there with the extractors still in pursuit. At the party, Stu's agent, Herb, exposes himself to the Oneirix in the Monkeybone doll and ends up seeing in the mirror that his clothes are coming to life. This causes Herb to run through the party naked, telling everyone that the clothes have come to life and turned evil. After that, Monkeybone in Stu's body tells everyone to forget about it as he brings down the Stu piñata containing the Monkeybone dolls. Stu uses Monkeybone's main characteristics from the comics to cause him to panic and escape. A chase ensues, culminating with Stu and Monkeybone battling each other while clinging to a giant Monkeybone balloon. The balloon is eventually shot down by a passing incompetent police officer and both Stu and Monkeybone fall barely enough to be non-fatal and fall unconscious.

Stu and Monkeybone are falling toward Down Town where the residents cheer on their fight. Just then, all the rides stop and a giant robot emerges near the Revive-O causing everyone to flee the area. When Stu and Monkeybone are caught by it, the operator of the robot is revealed to be Death, who seems quite cheerful despite the circumstances. Monkeybone tries to have Death let him go to the bathroom, but Death places Monkeybone back in Stu's head which is where he belongs. Death then uses her robot to send Stu back to the living and he wakes up in his own body. Stu then proposes to Julie and they get married. An erratic Herb breaks the fourth wallurging the audience to take off their clothes and the film cuts to an animated sequence where cartoon characters strip their human disguises revealing monkeys underneath. 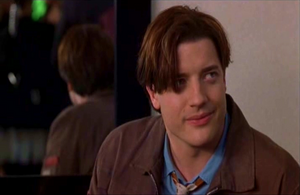 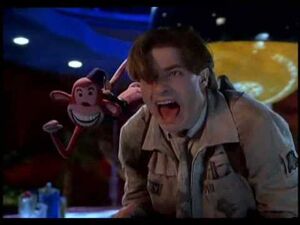 Add a photo to this gallery
Retrieved from "https://hero.fandom.com/wiki/Stu_Miley?oldid=1713216"
Community content is available under CC-BY-SA unless otherwise noted.