Stump Smash is a tree ent in Skylanders: Spyro's Adventure.

He is voiced by Kevin Michael Richardson who also voiced Tree Rex, Antauri from SRMTHFG, Bulkhead from Transformers: Prime and many others.

Stump Smash was once a magical tree creature who spent most of his time sleeping peacefully in the forests of Skylands. Then one day he awoke to discover that his entire forest had been chopped down and logged by the Trolls... himself included! His long branches were gone, leaving him only with powerful mallets for hands, which he used to smash the Trolls' tree-cutting machines. Although still grumpy about what happened to him, Stump Smash has vowed to protect Skylands against those who would do it harm... especially Trolls. 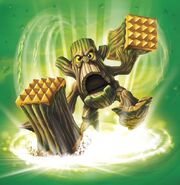 Series 2 Stump Smash.
Add a photo to this gallery

Retrieved from "https://hero.fandom.com/wiki/Stump_Smash?oldid=2178278"
Community content is available under CC-BY-SA unless otherwise noted.