Captain of the 2nd Division

Suì-Fēng is the commander-in-chief of the Onmitsukidō and the captain of the 2nd Division in the Gotei 13. Her lieutenant is Marechiyo Ōmaeda. She is the disciple and successor of Yoruichi Shihōin.

She is voiced by Houko Kawashima in the Japanese version of the anime and Karen Strassman in the English version.

Suì-Fēng is a shinigami, a Death God, ("Soul Reaper" in the English dub). As head of the Soul Society's second squad, Suì-Fēng is is in command of the shinigami stealth squad, used for information gathering and dispatching of targets quickly and silently. Suì-Fēng was Yoruichi Shihōin who would leave her post to pursue her own agenda. Yoruichi Shihōin was Yoruichi's loyal second in command and so after her departure Suì-Fēng implemented a strict set of standards and laws for her squad, as much for her own discipline as for there's.

Suì-Fēng is encountered for the first time in the manga during it's Soul Society-arc. During the arc soul reaper Rukia Kuchiki was to be executed for lending her powers to a human,Ichigo Kurosaki. Ichigo had inherited Rukia's power in order to stop one of the demonic creatures know as Hollows, once Rukia was incapacitated, however Rukia was unable to retrieve her powers when finished and so she was to face punishment for being careless with her powers. Upon being taken back to the Soul Society, Rukia was sentenced to spiritual obliteration for the crime. Ichigo and his allies make the journey to the Soul Society to free Rukia from the unjust punishment.

Though the captains of the Soul Society are bound to abide by the laws of the Central 46 judges many felt the punishment was extreme for the crime as well however they were all still honor bound to enforce the sentence. Suì-Fēng was one of the captains who held no objections to the punishment. As far as Suì-Fēng was concerned the word of the Central 46 was all that mattered. Suì-Fēng is encountered by one of Ichigo's allies and his guide into the Soul Society, Yoruichi as it turned out. Suì-Fēng was surprised to see her predecessor and mentor leading an incursion team into the Soul Society but was not willing to hold back. Yoruichi knew that Suì-Fēng could not be reasoned with yet tried all the same to make her realize how wrong the situations was. Suì-Fēng was outraged that Yoruichi, who had left her post, had the nerve to attempt to lecture her on ethics.

Suì-Fēng displays her powers to Yoruichi, including several that Yoruichi had specifically not coached her in, feeling she was less than ready. With something to prove Suì-Fēng throws everythig she has as Yoruichi including the techniques of Kido and Hakuda (magic and unarmed combat). Suì-Fēng finds that even with her master of the techniques Yoruichi is still able to counter and/or evade her techniques. Suì-Fēng also comes to the conclusion she simply can not bring herself to finish off her ex-commander even if she was skilled enough to defeat Yoruichi outright. By the time the two come to an understanding they hear and announcement from Lieutenant Isane Kotetsu on behalf of Captain Retsu Unohana, who had been investigating the odd orders during the invasion. The announcement revealed that Central 46 had been slaughtered and the presumed deceased Captain, Sōsuke Aizen, had in fact faked his death, killed the judges and falsified their orders to get a powerful item called the Hōgyoku which had been hidden within Rukia.

With the sham, exposed Suì-Fēng and Yoruichi team-up to speed over to Central 46 and stop Aizen at all costs. Aizen is able to escape with the aid of the Hollows, whom he had apparently long since made a pact with. Aizen had extracted the Hōgyoku from Rukia personally with his plan exposed and no longer needing to wait for a formal execution, then vanished with his prize. Hōgyoku states that finding Aizen and the Hōgyoku will be her top priority, however the head-captain, Genryūsai Yamamoto, told orders Suì-Fēng and all the other Captains to make their top priority repairing the damage done to the Soul Society. Suì-Fēng obeys her orders but is still determined to make Aizen pay for his crimes once the time comes. From that point on in the manga Suì-Fēng becomes a staunch ally to the main heroes along with most of the other Captains, wishing to see Aizen's plans for the Hōgyoku foiled. 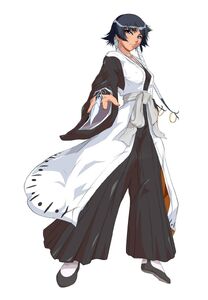 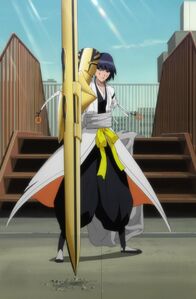 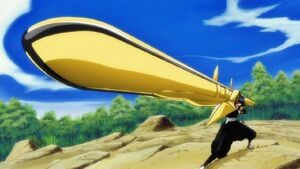 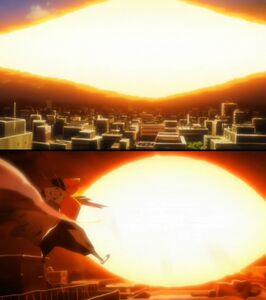 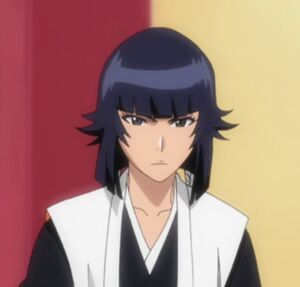 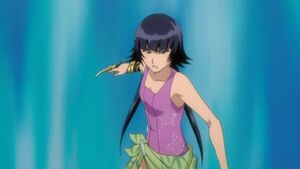