Working at KSI and spending quality time with Joshua.

Stop the Autobots. (Formerly)
Help Joshua get the seed safely away from the city in China and save the world. (Succeeded)

She is portrayed by Li Bingbing.

Su was at KSI's Chicago HQ complaining to Joshua Joyce about the need for more Transformium when Cade Yeager and Shane Dyson infiltrated the building with Bumblebee. Following the Autobot attack on the building, Su observed the operation as Galvatron and Stinger were deployed for the first time in the field, and reacted with horror as Galvatron destroyed several civilian vehicles. As Joyce subsequently decided to relocate operations to the China facility, she expressed her grave doubts at the results of the testing so far, buy Joyce assured her there'd be time for more testing in China.

Accompanying Joyce to China, Su was onhand to report that Galvatron had unexpectedly come online and was rallying the other prototypes. She drove Joyce and Darcy Tirrel from the factory as the prototypes ran loose and the factory was evacuated. She was shocked to learn that Joyce was carrying the Seed — for all intents and purposes a powerful bomb — in the car with them. Su drove them to Hong Kong where she knew a military garrison who'd help them. In Hong Kong, needing to split up, Su talked a motorcycle owner into parting with his cycle, and took Joyce on a ride through the city, pursued by Attinger and his Cemetery Wind forces. Diverting into a building, she stuck Joyce in an elevator and had to deal with him having a minor freakout. When Attinger's forces arrived, she fought them successfully with the help of a local. When Joyce declared his love for her, she promptly stuffed him back into the elevator, telling him to get to the roof.

Much later, after Lockdown had been defeated, Su found Joyce with Optimus Prime and the Autobots and watched Optimus fly off into space.

It is unknown of what happened to Yueming, Joshua, Shane, Tessa and Darcy after the Battle of Hong Kong. It is possible that they were hiding from the TRF because they worked with Cade and the Autobots who were declared international criminals.

She is also skilled in martial arts and is very strict on getting the job done. Even when it comes to Joshua Joyce being funny or seeing her as the woman he loves. 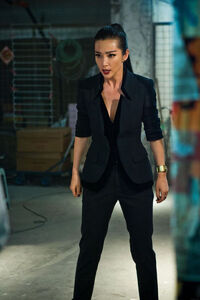