NOTE: This article is about the incarnation of Sub-Zero from the Mortal Kombat Legends films. The mainstream version can be found here: Sub-Zero (Mortal Kombat)

Member of the Lin Kuei (formerly)

Get revenge on Scorpion. (formerly).

Help to defeat the One Being. (succeeded).

Grand Master
Cyrax
Sektor
Smoke
Shinnok
The One Being

Elemental Ninja
Kuai Liang, better known as Sub-Zero, is one of the main/secondary protagonists in the Mortal Kombat Legends series. He is one of the supporting characters in the 2021 direct-to-DVD animated movie Mortal Kombat Legends: Battle of the Realms. He was once a member of the Lin Kuei clan until the Grandmaster of said clan commences the Cyber Initiative, where he and his friend Smoke attempt to escape. Smoke is captured, but Sub-Zero succeeds to escape. He is also the former enemy turned close friend of Scorpion.

He was voiced by Bayardo De Murguia, who also voiced as several background characters from Fast and Furious: Spy Racers and Batman: The Telltale Series.

Kuai Liang is first seen in the movie training in combat with his ally Smoke at the Lin Kuei temple. When the training ends, Smoke offers Kuai Liang the Sub-Zero mask, stating that he's 'a good enough fighter for it.' Kuai Liang refuses, stating that he isn't ready yet. The two are then met by a Lin Kuei ninja, telling them that the Grandmaster wishes to meet them.

The Grandmaster then explains that the future of the Lin Kuei is now, and Cyrax and Sektor both walk toward Kuai Liang and Smoke, for the purpose of turning them into cyborgs as well. Smoke casts a cloud of smoke that briefly covers up his and Kuai Liang's escape, but Sektor manages to spot them with his x-ray vision. The two cyborgs chase after Smoke and Kuai Liang, and manage to capture Smoke. Kuai Liang tries to save his friend, but Smoke tells him to run, which he does so, and manages to escape the Lin Kuei temple.

Kuai Liang returns yet again at a seemingly abandoned harbour where he freezes Sektor and Cyrax in ice, then tries to kill Scorpion to avenge his brother, and now dons the Sub-Zero mask. Both he and Scorpion fight it out until Smoke arrives, now as a cyborg. The now-cyber Smoke uses heat emitters which melts the ice Sektor and Cyrax are trapped in. The three Cyborgs then battle and manage to defeat Scorpion and Kuai Liang, and they take Scorpion with them. Kuai Liang on the other hand pursues them just for the purpose of killing Scorpion and avenging his brother.

More To Be Added soon

Kuai Liang started off as a neutral warrior who was very loyal to the Lin Kuei. But after the death of his brother Bi-Han, he became more vengeful and would stop at nothing to find his brother's killer, Scorpion. But after learning the truth and understanding that Scorpion didn't mean to kill Bi-Han, as it was Quan Chi who impersonated as Bi-Han and convinced the Lin Kuei to kill off the Shirai Ryu, Kuai Liang became a more caring and helpful ally to Scorpion, though states that 'he will never forgive Scorpion.' 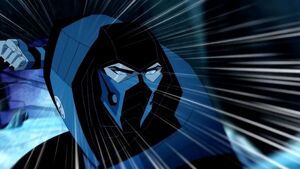 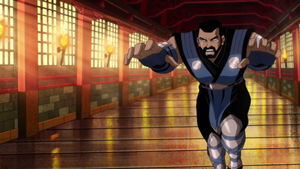 His appearance was based on his Mortal Kombat (2011) primary costume.