Watching Akko failing cartoon made by herself

Sucy Manbavaran is a fictional character and one of the main protagonists of Little Witch Academia. She is a young witch from the Philippines, Southeast Asia, and Akko Kagari and Lotte Yanson's classmate at Luna Nova Academy.

Sucy is a tall, thin girl who bears an image of a stereotypical witch. She has pale grayish-mauve skin, puce hair and red eyes with white pupils. She comes off as laid-back, with droopy, half-lidded eyes that make her look indifferent or lethargic half of the time. Her left eye is covered by a large fringe of hair. Because of Sucy's pastel mauve tone, seeming lack of arms (her arms are only visible when she moves them), and a uniform which is longer than usual, that is reaching to the ground, she gives off an eerie aura and a ghostly appearance.

For pajamas, Sucy wears a white and red cap and a white long-sleeved collared shirt that reaches past her feet. She is sometimes depicted without arms in this outfit, making her look even more ghostly.

The early promotional poster of the original film gives Sucy olive-green hair instead of puce, blue eyes, and a slightly darker skin tone.

When introduced in the short films, Sucy is portrayed as an aloof, calm, sarcastic and somewhat sadistic person. She also surprisingly remains indifferent in various situations and things that drive the other girls crazy.

In "Sleeping Sucy" and as shown in separate occasions, it has been suggested that even with her own kind, Sucy was considered an eccentric freak; she had a clear preference on something which scared or at least disturbed other girls, such as the idea of getting eaten, foul-smelling fumes of potions or poisons, performing experiments with potions and poisons on Akko, and pulling scary pranks that she found amusing, less so for her victims. Hannah and Barbara also refer to her as "Creepy Sucy" when picking on Akko. However, contrary to their belief, Sucy is neither a complete freak nor a heartless anti-social girl, as she does care a lot for her friends in spite of having no qualms about using them as test subjects in her potion experiments, whether or not they give consent to it. In addition to this, her other hobbies are shown to include yoga and meditation. It is also hinted that the only emotional connection she had was with Akko, which explains why the memory of their first meeting is considered the best one she has. 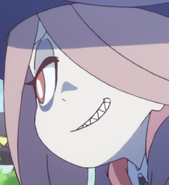 Sucy's endearing grin.
Add a photo to this gallery
Retrieved from "https://hero.fandom.com/wiki/Sucy_Manbavaran?oldid=1128205"
Community content is available under CC-BY-SA unless otherwise noted.