Sue Ellen Armstrong is a cat and a character from Arthur.

Sue Ellen is an anthropomorphic cat who is depicted with a tan complexion, curly orange hair worn in pigtails, and wears a teal shirt-dress with a cream-colored vest over it and red-and-white sneakers. In the early Arthur books, her hair was worn loose; she was given her pigtails starting with the Arthur book Arthur's TV Trouble. In some of the later books, her hair color had changed from blonde to yellow-orange. She wears a two-piece green swimsuit with a purple trim when swimming. For her sleepwear, she is often seen wearing orange pajamas.

Sue Ellen is assertive, proactive, brave, tough, kind, slightly tomboyish, tolerant, honest, and creative. She is an amazing storyteller and is open-minded. She is also easy to get along with and can solve problems on her own. She is very mature and artistic for her age and interested in world culture, which is the reason she makes friends with people older than herself, such as Betsy Johnson. Athletic-wise, she is defender for the Lakewood Elementary Soccer Team. She wanted a sibling so she would not be as lonely, but she ends up regretting the need after she goes to Arthur's house and plays with D.W. for a few hours.

Sue Ellen's father is a diplomat, so she and her family have lived in various places around the world. It is unknown why her family has settled in Elwood City. She has lived in places like Egypt and Nicaragua, mostly for a couple of months to a year. Her family also spent a year in South Africa. Other places she has lived in include Togo and Kenya. She had never been to a place with snow before moving to Elwood City. She is skilled in martial arts, for example, Tae Kwon Do, making her more physically strong than the average third grader. In the Postcards From Buster episode "Buster Gets on Board", Buster meets Sue Ellen's friends who are skateboarders including Sue Ellen's pen pal Brandon. This gives hint that Sue Ellen at one time lived in Los Angeles, California.

If the intro to the episode, "The Election" does happen in the future, she will be either future President Muffy's running mate or a member of her party. In the imagination of Arthur in "Arthur Rides the Bandwagon", Sue Ellen appears next to the Brain and with a child much like him (but with glasses).

In "Sue Ellen Moves In," Sue Ellen moves to Elwood City. Buster thinks she is an alien because she has many strange objects. He later realizes that she has lived all over the world and they become friends. In "Bully for Binky", Sue Ellen stands up to Binky and is not afraid to stand up to someone much bigger than her. Binky becomes intimidated by her because she knows martial arts. Later, Sue Ellen says that she doesn't want to fight him, but if he ever does, she'll be ready. Binky soon stops his bullying.

In "Sue Ellen's Lost Diary", she loses her diary in the library. She asks her friends, but they haven't seen it. They wonder what is inside. Soon, they find her diary, but they ultimately chose to not open it. Sue Ellen recovers her diary and hints that she has a crush on Arthur; this was probably to an allusion to Arthur's crush on Sue Ellen in the Arthur books. In "Sue Ellen's Little Sister", Sue Ellen feels sad that she doesn't have a sibling. She asks her friends to be their siblings and realize that older brothers won't work. She looks for little sisters and ends up with D.W. whom she can't stand. She later realizes the pros of being an only child. Her parents get her a brother-like friend from Tibet to whom she can write letters to.

One of Sue Ellen's biggest appearances in this season is in "Sue Ellen and the Brainasaurus". She later appears in "Popular Girls", in which she is the central character with Fern, and "Arthur's Almost Live Not Real Music Festival".

In "Sue Ellen Vegges Out", she becomes a vegetarian because she considers animals as friends and loses her taste for consuming them.

Sue Ellen in a bikini 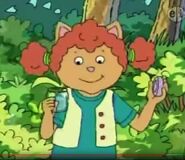 Retrieved from "https://hero.fandom.com/wiki/Sue_Ellen_Armstrong?oldid=1965176"
Community content is available under CC-BY-SA unless otherwise noted.