To transform his body into a liquid form

Looking after his sword.

To protect Otogakure and Ninja world from oncoming evil threats.

Suigetsu Hōzuki is from Kirigakure's Hōzuki Clan. Heralded as the Second Coming of the Demon no Sairai, Suigetsu dreams of gathering all the swords of the Seven Ninja Swordsmen of the Mist (including Samehada).

He is also the younger brother of one of the deceased Swordsmen, Mangetsu Hōzuki.

Suigetsu is a lean-built young man of average height, straight white hair with a light-blue tint to it in the anime, almond shaped purple eyes, and like most of the members of the Seven Ninja Swordsmen of the Mist, he has pointed teeth — one of which sticks out even when his mouth is closed. He wears a purple, sleeveless shirt with blue pants, sandals and a belt around his waist with water bottles attached to it.

He also wears another belt strapped to his chest which he uses to carry the Kubikiribōchō. Due to his special body, Suigetsu is able to alter his form at will, usually to aid in his techniques and when rendered unconscious, he is reduced to a jelly-like state. Whenever he is seen recovering from these unconscious states he is placed in a large tank of water and resembles a fish-like being.

Suigetsu appears to be a indifferent man, caring only for a few things around him. He spends a considerable amount of time mocking and/or being beaten up by Karin. Despite showing initial dislike towards his team-mates, Suigetsu has grown fond of them, and was willing to risk his own life to protect them against the Eight-Tails, showing care for his team-mates. Unlike his older brother Mangetsu, Suigetsu is quite arrogant. 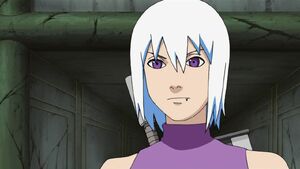 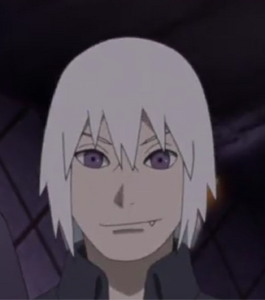 Suigetsu in Boruto: Naruto Next Generations 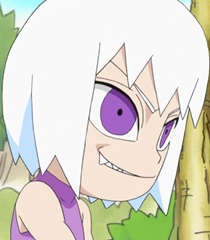