Leader of the Kyoshi Warriors

Spending quality time with her group, the Kyoshi warriors, and her boyfriend, Sokka.

To protect the world from the Fire Nation's tyranny. (succeeded)

Following her first meeting with Avatar and company, Suki and the other Kyoshi Warriors decide to take part in the ongoing 100-year war after Zuko attacked her island in search of Aang. Since then, she and her team made later recurring appearances. Despite not having any bending capability, Suki is still a formidable warrior. Her weapons are Japanese fans, a sword, and a shield.

In Book 3: Fire, it was revealed Suki was imprisoned in the Boiling Rock prison following her defeat at the hands of Azula but was also eventually rescued by Sokka and Zuko. Afterwards Suki joined Team Avatar as a full member and resumed her romantic relationship with Sokka.

Suki is voiced by Jennie Kwan.

Self-confident and tough, Suki mocked Sokka because of his chauvinist attitude. Befitting her status as leader of the Kyoshi Warriors, Suki was tough, assertive, and not afraid to speak her mind; but at the same time, she had a compassionate and loyal spirit. Her softer side was frequently demonstrated in the presence of Sokka. For a long time during her imprisonment, Suki held out the hope of seeing Sokka again and showed no sign of breaking in the face of Azula's torments pertaining to Sokka. She also had a mild tendency to hold grudges, demonstrated by her initially treating Zuko coldly when they met in prison, and also readily looking forward to a rematch with Azula and Ty Lee. A woman of action, she quickly and skillfully captured the prison warden, an action which prompted approval from Hakoda.

Despite not being a bender, Suki was more than capable of handling herself in a fight. She was the last warrior to be captured by Azula, showing the extent of her skill. She was an impressive hand-to-hand combatant, using a style reminiscent of Aikido, as well as fighting with traditional Kyoshi war fans, a style reminiscent of Tessenjutsu, and skilled with the katana. She could hold her own against other skilled fighters, such as Ty Lee, readily avoiding her disabling pressure point strikes, and was a good teacher, passing some of her fighting methods on to Sokka. She also possessed considerable physical strength, able to swim easily in full Kyoshi Warrior armor and toss aside a full grown man with ease. During the breakout of the Boiling Rock, she bypassed a full-scale riot by jumping across the tops of the rioters' heads, scaled the vertical face of a building, demonstrating a skill set similar to that found in parkour, and an acrobatic skill comparable to that of Ty Lee. Following the Hundred Year War, Suki learned chi blocking from Ty Lee. She demonstrated the skill for the first time on San. 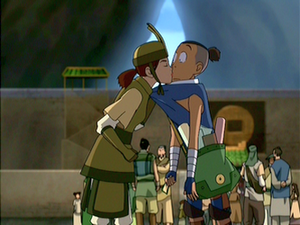 Suki making Sokka realize who she is with a kiss. 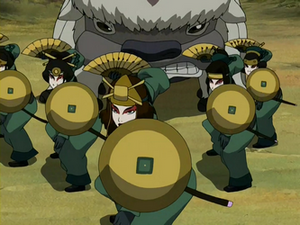 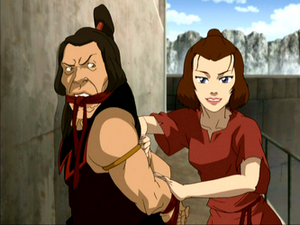 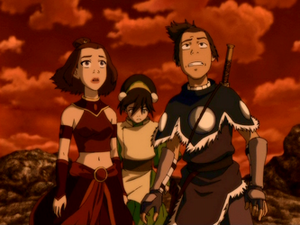 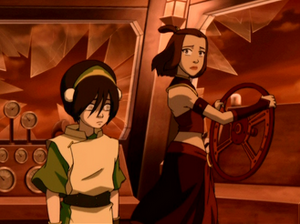 Suki and Toph genuinely concerned for Aang during the Battle at Wulong Forest against Phoenix King Ozai. 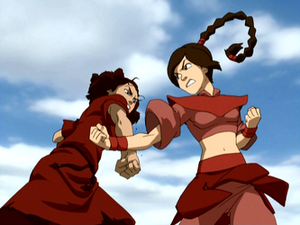 Suki's battle with Ty Lee on the Boiling Rock gondola. 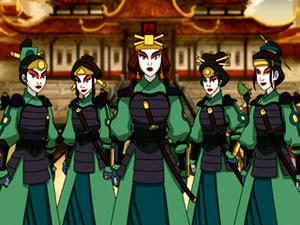 Suki and her Kyoshi Warriors assembled. 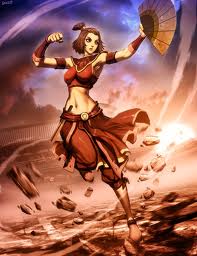 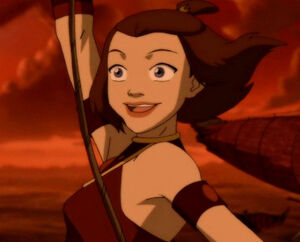 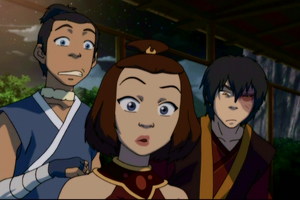 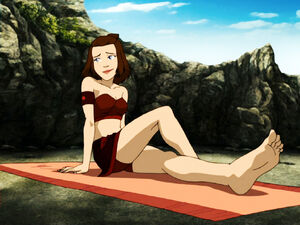 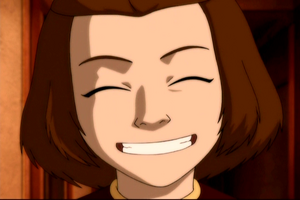 Suki's heroic grin.
Add a photo to this gallery

Retrieved from "https://hero.fandom.com/wiki/Suki_(Avatar:_The_Last_Airbender)?oldid=1980100"
Community content is available under CC-BY-SA unless otherwise noted.