Note: This Article is about Sunflower, for the Plant Hero counterpart, see Solar Flare.

Help the plants defend the Players' house from the zombies

The Sunflower is one of the main protagonists of Plants vs. Zombies franchise. She is a plant that can produce sun overtime to help the player fight the zombies.

In the credit music video Zombies on Your Lawn, she was voiced by Laura Shigihara, the former composer of the franchise.

Sunflower is a plant that has sixteen yellow petals on her brown face, which includes black eyes and a smile. Her body is a green stem with four leaves as legs to help her moving around.

She first appeared after the players completed Player's House - Day 1. In the next level, the game gave the Players instructions about her, as see can produce 25 suns in seven seconds.

In the credit music video, Sunflower appeared and sang the song "Zombies on Your Lawn", with many zombies dancing around her.

She also returned in the sequel of the first game after the Players completed Player's House - Day 1. Unlike the first game, she gives you 50 sun each instead of 25. She is in Enlighten-mint family, a family of sun-producing plants.

In this game, she returned as one of the playable character on the Plants' side.

In the introduction of Plants vs. Zombies: Garden Warfare 2, she spawned at the Zombies' side and the players had to help her get to the landing zone to get back on the Plants' side.

She returned in Battle for Neighborville as a playable character of Support Class on the Plants side.

As seen in the introduction of Plants vs. Zombies Heroes, the malfunction of the Hero-Tron 5000 turned a Sunflower into Solar Flare, one of the Plant Heroes.

Sunflower also appeared as a Solar Plant Card. Her rarity is Basic - Common, she costs 1, with the Flower tribe, and her health is 1. Her trait is Team-up, allowing the players to plant tow plants in a column instead of 1. She can produce an extra sun for each turn. When attack, she spits a small sun that can deal with damages dependent on the amount of strength.

Sunflower returned in this game to help the players plant their plant defenses with the sun. Unlike other versions, she cannot be planted. Rather, she appears on the sun meter as an idle determinant of the situation.

Sunflower, alongside Peashooter, Wall-nut, Bonk Choy, The Player, Crazy Dave, and Penny ventured through Neighborville to obtain the Solar Sunglasses. To do this, she had to find the magic beans and use their magic words to open the Vault. The heroes also encountered the Brainiacs on the way. Before she could utilize the Solar Sunglasses, Dr. Zomboss stole it and attempted to use them for his villainous purpose. The Magic Beans protected her from harm by defeating Zomboss. However, he is far from losing, as he proceeds with the second part of his plans.

She appeared as one of the supporting characters to help Nate Timeley and Patrice Blazing fight the Zombies.

Also in the comics, there was a Sunflower named Fred, who appears to be square-shaped and a male.

Plants vs. Zombies vs. Jay and Silent Bob

She appeared as a minor character in the Episode 3, The Epic Conclusion.

She appeared as a Singing Sunflower pet in World of Warcraft.

She appeared as one of the costume in this game.

Mystic Flower is a Super Rare (Rare in Garden Warfare 2) enigmatic Sunflower variant whose Mysterious Energy is a weapon that turns into a blast when supercharged.

The Power Flower is a Rare energized Sunflower variant that utilizes her electrical Power Pulse.

Fire Flower ignites enemies with her blasts of Flame Pulse.

Shadow Flower is a Super Rare (Rare in Garden Warfare 2) dark Sunflower variant whose Dark Energy fires faster than a standard Sunflower, with an exchange of a slower recharge.

Metal Petal is a Rare (Super Rare in Garden Warfare 2) metallic Sunflower who is much more durable than a standard Sunflower but slower, and she utilizes her primary weapon Metal Blast.

Metal Petal returned in Plants vs. Zombies Heroes as a Flower Plant of Solar class. Her rarity is Premium - Uncommon, she costs 4 suns, and her strength and health are 3 and 4. Start of turn, the players earn an extra sun.

Alien Flower is a Rare (Super Rare in Garden Warfare 2) extraterrestrial Sunflower variant whose Spore Mist is a single-shot primary weapon that leaves an aura to deal overtime damages to enemies.

Vampire Flower is a Super Rare Sunflower variant in Garden Warfare 2. Her primary weapon, Life Leech, heals herself upon dealing with damages. She also has lower health tan other Sunflowers, being 85.

Stuffy Flower is a Rare Sunflower variant in Garden Warfare 2. Her Rainbow Sunburst drops healing droplets after she vanquishes a zombie. 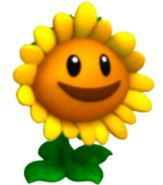 Sunflower in Plants vs. Zombies Adventures. 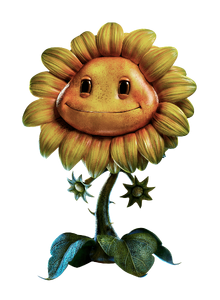 Another Render of Sunflower. 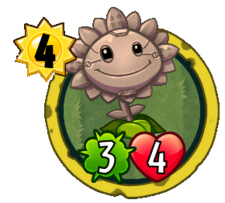 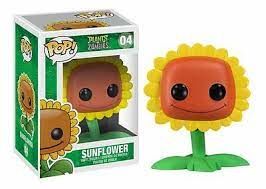