Dressing up, going on adventures with Calla, Cubbi, and Tummi

To become a Princess

Damsel
Sunni Gummi is one of the main characters of Disney's Adventures of the Gummi Bears. She is a pre-teen gummi who quickly befriends Princess Calla. She is voiced by Katie Leigh.

Sunni is the second-youngest of the Gummis after Cubbi, who dreams about becoming a princess. This desire led her to become best friends with Princess Calla. Sunni is shown to be curious about human culture, but not nearly as concerned about Gummi history.

Sunni's appearances generally revolve around her desire to be a princess, as well as her desire to be older. Early on, she is shown to have a talent for singing that leads to her kidnapping by the Carpies. After expressing to elder Zummi that she wished she could change her life, Zummi conjured a "changing hat" that would transform the wearer into the one whose name they said aloud. Sunni changed into Calla and sought to see what it would be like to be a princess with Cubbi tagging along as her "pet bear". The real Calla ran away from home earlier after feeling trapped by her royal duties. After causing a minor fracas in the castle, Sunni realized that the grass wasn't as green on the other side as she thought, but before they could leave,  Sunni as "Calla" was captured by Duke Igthorn, while the real Calla and Cavin were kidnapped in the woods by Igthorn's ogres. Calla and Sunni met for the first time in a tower prison cell and became fast friends with Sunni and the other Gummis after they united to escape Drekmore.

Later on, she would run into problems regarding her lack of knowledge of Gummi history. When Grammi was trying to find an apprentice to teach the Gummiberry juice recipe, Sunni proved to the be the only suitable candidate, due to various problems with the male Gummies. This proved to be a mistake when Grammi got captured by Duke Igthorn and the male Gummies spearheaded a rescue mission, to which they requested Sunni to make some juice for them. At Calla's advice, they both went to Drekmore castle to rescue the Gummis and get the recipe back. She tricked the ogres in the Gummiberry juice factory room to get her the ingredients. Remembering the three step stir, she made the only stable batch of the juice and was able to rescue Grammi from falling from Drekmore's tallest tower.

Later in the series she is shown to have a crush on Gusto. This got her into trouble when they both encountered a beautiful mermaid named Aquarianne washed up on the beach. Gusto wanted to sketch her but they were driven away by Aquarianne's sea beast pet Finwhippit. She then realized that the two gummis weren't there to hurt her, she returned Gusto's sketchbook (albeit ruined by the water) and rescued Sunni from drowning. Out of jealousy, Sunni told Aquarianne that when Gusto said he was going to "capture" her that he was going to put her up on his wall for real. Duke Igthorn and toadwart captured Aquarianne and stole her codshell whistle that summons her beast (so he could summon the beast to destroy Dunwyn Castle). They rescued the mermaid from Drekmore and foiled Igthorn's plans. After a heartfelt apology for lying about Gusto to her, the two girls hugged and Gusto was inspired to sketch them together.

Sunni and Princess Calla were often paired in their own adventures, like when a selfish Princess Marie from another country came to visit and threw her weight around and nearly caused a war because she wanted Calla's "Gummi Bear doll". Sunni helped Calla win her own right to protect herself by entering as a mystery squire in a Squire's competition for being Calla's royal protector. With Sunni's help, Calla's pretense worked and after telling her father the truth, Calla won the competition and gave the other cowardly squires (especially blowhard Unwin) their just desserts. 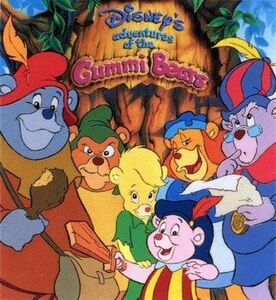 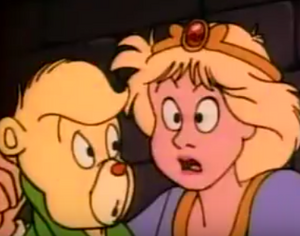 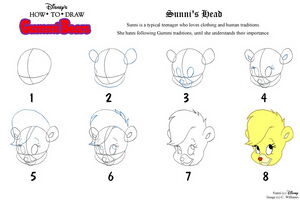