Sunny Flare is a female human and one of the Crystal Prep Academy Shadowbolts in My Little Pony Equestria Girls: Friendship Games

She wears a Crystal Prep Academy uniform. In Dance Magic, she wears a street ballet outfit.

Sunny Flare appears in My Little Pony Equestria Girls: Friendship Games as a student of Crystal Prep Academy and a member of its sports team, the Shadowbolts. She first appears outside the bus to Canterlot High School with Sour Sweet and Fleur Dis Lee. When Twilight Sparkle inadvertently cuts to the front of the bus line, Sunny Flare looks at her with silent contempt, and when the bus arrives, Twilight accidentally knocks her over, making her even more annoyed.

During Canterlot High's welcome party for Crystal Prep, she briefly confronts Sunset Shimmer and the other Wondercolts, condescendingly calling Fluttershy "dearie" at one point.

In the Friendship Games' Academic Decathlon, Sunny Flare is partnered with Sour Sweet in the woodshop event, and she is eliminated from the spelling bee contest for misspelling "rhombus." She and Lemon Zest take part in the speed-skating portion of the Tri-Cross Relay, but they lose to Pinkie Pie and Rarity.

Before the Games' final event, Sunny Flare and her team join Principal Cinch in pressuring Twilight into releasing the magic contained in her amulet, intending to use it against Canterlot High. They all watch in horror as the magic transforms Twilight into Midnight Sparkle, and Sunny Flare is the first to notice Cinch attempt to flee. As Midnight tears open multiple rifts into Equestria, Sunny Flare saves Fluttershy from falling through one.

After Twilight returns to normal, Sunny Flare and her team turn on Cinch for causing Twilight's transformation, and they celebrate their shared victory with the Wondercolts.

Sunny Flare is a cute girl who portrayed as being the most poised of her teammates, sharing some of Rarity's elegant and self-confident mannerisms, but with a more arrogant, rude, and aloof demeanor. She also shares her school's competitive streak, poor sportsmanship, and willingness to manipulate others to achieve their goals. Later on, she reveals a more conscionable side to herself when she accosts Principal Cinch for running away after her actions put both schools in danger, and later when she joins her team in rescuing Canterlot High's students.

"Absolutely, Sour Sweet. [to Sci-Twi] On the other hand, you could try waiting in line like everyone else."
— Friendship Games novelization 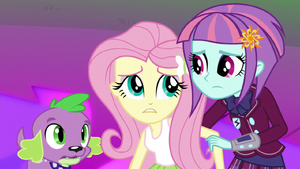 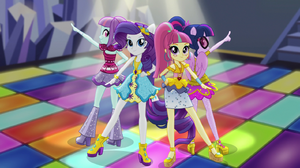 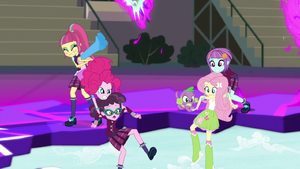 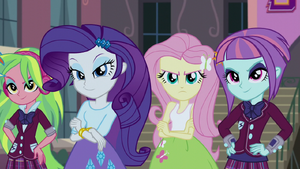 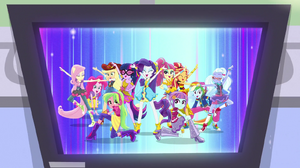 Retrieved from "https://hero.fandom.com/wiki/Sunny_Flare?oldid=1893914"
Community content is available under CC-BY-SA unless otherwise noted.