Super Goof is a character in Disney comics, superhero alter ego in which Goofy turns after swallowing the super peanuts (called "Super Goobers").

The character created by Del Connell and Paul Murry in 1965 had suffered some success, especially in Brazil, France and the United States itself. His official debut took place in the history of zanzipar Goofy and the robbers, coincides with the opening of a new US magazine devoted entirely to him: Super Goof.

In the story The Ultra Goof against The Phantom Blot created by Del Connell and Paul Murry published in April 1965, Goofy is under the illusion that it has acquired superpowers that do not yet possess. In the next story Goofy and the lesser evil, consisting of only four tables and always made by the same duo of authors, the awkward inhabitant of Mickey Mouse wearing a cape made from special Gyro Gearloose and can artificially acquire real super powers. However, this mini-adventure the character is only sketched and have not yet been clearly defined its characteristics. The story of Goofy and the robbers of Zanzipar is considered the official debut of the character, who manages to earn (for a limited time) superhuman powers by eating some peanuts cultured from a plant grown in his garden.

Super Goof keeps the physical appearance of Goofy, except for clothing, replaced by a pair of red tights and a large blue cloak knotted at the neck. Hat, gloves and shoes are the same of his alter ego. Unlike Paperinik (which makes use of technological devices, as sophisticated) Super Goof possesses superpowers almost magical, in contrast to the laws of physics: it is able to fly, has superhuman strength, enhanced sensory faculties and is practically invulnerable.

But it seems that the transformation into Super Goof has no power to change the intellectual capacity of Goofy: the superhero saves in all respects the character and jovial spontaneity of his alter ego, which is his weak point in clashes with his enemies (but it is undoubtedly the key to the comedy of the character).

Moreover, the effect of peanuts is temporary and ceases spontaneously after a time not very long, and without giving any premonitory symptom. In these moments, in which he finds himself suddenly turned back on Goofy, the hero is revealed dangerously vulnerable, especially if he has with him some peanuts spare.

The paladin of Mickey Mouse

Similarly to Paperinik in his Duckburg, Super Goof became the masked champion of mice, even if the criminals to catch the mice are lower in the city, because the local police has already helped more egregious than Mickey Mouse. Unlike paperopolese, Super Goof is a member of a special "congregation", the Club of superheroes, which brings together the champions of each galaxy masked. For the style of which is proposed universal hero, Super Goof appears in all respects as a parody of the well-known Superman, where the blue costume is replaced by a red tights and rational intelligence to a more "pippesca" and then to the point of absurdity.

In the saga of Ultraheroes Super Goof is recruited by Eega Beeva to be part of the group of Ultraheroes, created to combat the threat of BAD-7 gang of "ultra" bad guys led by Emil Eagle. In the third installment of the series Super Pippo, with the new blue costume group, fights and defeats Inquinator. 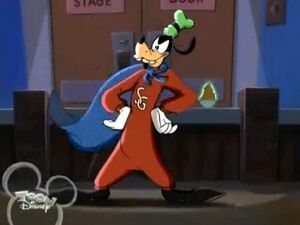 ✔
Retrieved from "https://hero.fandom.com/wiki/Super_Goof?oldid=1843689"
Community content is available under CC-BY-SA unless otherwise noted.