Defeating Dr. Wily and his robots.

To stop Dr. Wily and his robots with Sonic the Hedgehog turned into Super Sonic (succeeded).

In the Crossover comic of Sonic and Mega Man series, Sonic and Mega Man team up to stop the mad genius Dr. Wily, the main antagonist of the comic book, helped by the 7 Chaos Emeralds thanks to Sonic, he and Sonic turn into their Super forms to outsmart Dr. Wily and his robotized being who tried to set up to destroy all traces of life on Mobius and Mega Man's homes for no reason.

Like Super Sonic, Super Mega Man is invincible with 50 rings just like Sonic before him. After Dr. Wily is defeated, Mega Man and Sonic revert back into normal forms after Dr. Wily is forced to retreat. Mega Man gives Sonic an truce in order to meet him again to fight the other threats that could be really happened on the planets.

When the rings run out, Mega Man went back to normal just like Sonic, Knuckles, Shadow and Tails before him. 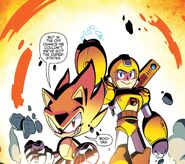 Add a photo to this gallery
Retrieved from "https://hero.fandom.com/wiki/Super_Mega_Man?oldid=1892189"
Community content is available under CC-BY-SA unless otherwise noted.