Keep Superman on the right path (failed for reasons beyond her control).
Stop Brainiac from destroying Earth (succeeded).
Stop Superman's reconquest of Earth (canonically succeeded).
Redeem the House of El and stop people from fearing its symbol.

Supergirl (real name Kara Zor-El) is the tritagonist of the 2017 fighting game Injustice 2, the direct sequel to the 2013 video game, Injustice: Gods Among Us.

She was voiced by Laura Bailey, who also voiced Rayne in the BloodRayne series, Chun-Li in the Street Fighter series, Jaina Proudmoore in the World of Warcraft series, Sherry Birkin in Resident Evil: The Darkside Chronicles, Angela Miller in Resident Evil: Degeneration, Serana in The Elder Scrolls V: Skyrim DLC Dawnguard, Helena Harper in Resident Evil 6, Abigail Walker in the inFamous series, Fiona in Tales from the Borderlands, Kait Diaz in the Gears of War series, Nadine Ross in the Uncharted series, Eltariel in Middle-earth: Shadow of War, Mary Jane Watson in Marvel's Spider-Man, Catwoman in Batman: The Telltale Series and The Enemy Within and Wonder Woman in Lego Batman Superheroes.

During the game's story mode she flees Krypton with an infant Kal-El before it is destroyed by Brainiac although her ship is knocked off course. Her ship is found by Black Adam who, alongside Wonder Woman, tells her half truths about Superman and how he is being detained by Batman. When Brainiac attack Earth, Supergirl goes with Black Adam and Wonder Woman to break Superman out of prison. Batman reluctantly releases Superman himself as they need Superman to defeat Brainiac.

Supergirl then fights alongside Wonder Woman but is overwhelmed by Cheetah's magic. As Wonder Woman goes to kill Cheetah, and then Harley Quinn, Supergirl stops her and takes Harley to receive medical care. When Supergirl tells Superman of this, she is horrified to hear Superman chastise her for "getting in the way" and how Harley should be killed because of her past.

Supergirl then attempts to leave but is stopped by Superman and his allies, all of whom she defeats. Superman then tells her that when this is all over she needs to decide if she with or against him. After Superman is seemingly killed by Brainiac, Supergirl is shocked to hear Batman speak highly of him and how he has missed him every day, especially getting more answers from him behind Superman's recent madness caused by Joker. Batman and Supergirl then infiltrate Brainiac's ship where she is captured. She later helps Superman and Batman defeat Brainiac.

As both sides begin to argue about what to do with Brainiac, kill him or use him to restore all the lost cities, Supergirl sides with Batman against Superman. Depending on who the player choose, Supergirl leads Superman and Wonder Woman to the Batcave where she and Batman defeat Wonder Woman and Superman. In the aftermath Batman depowers Superman and sends him into the Phantom Zone. Batman then tells Supergirl the story of the Justice League and his attempts to re-form it, offering Supergirl membership. 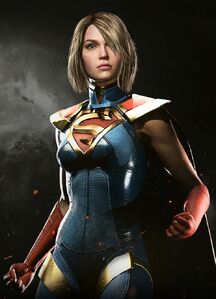 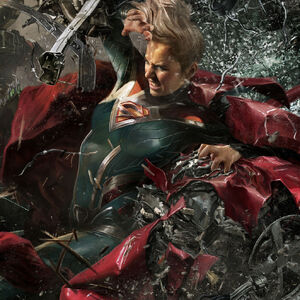 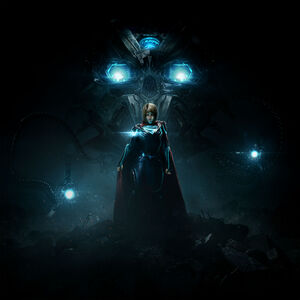 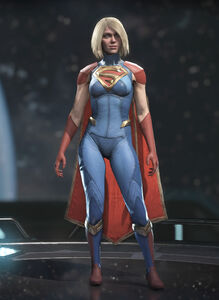 Supergirl experienced by a Brainiac drone.

Supergirl with Batman after Superman's defeat.