Protector of Earth and the Universe,
Justice League member

Defend his adopted home world from anything or anyone who threatens it.
Support the Justice League (succeeded).

Kal-El, alias Superman, is the second character to get their own series in the DC Animated Universe, the main protagonist from the animated TV series Superman: The Animated Series, and is a member of the Justice League and Justice League: Unlimited and makes a guest appearance in Batman Beyond.

He was originally voiced by Tim Daly in Superman: The Animated Series, by George Newbern in Justice League and Justice League: Unlimited, and by Christopher McDonald in Batman Beyond.

Kal-El was an infant sent to Earth by his parents (Jor-El and Lara-El) prior to the destruction of their home planet Krypton. Kal-El's capsule landed near Smallville, Kansas where he was found by Jonathan Kent and Martha Kent and subsequently took a liking to both of them. The Kents adopted the young Kryptonian, naming him "Clark" after Martha's maiden name.

As a youth growing up in Smallville, Clark encountered Cosmic Boy, Saturn Girl, and Chameleon Boy prior to discovering the full extent of his powers. During this incident, he aided the trio in stopping Brainiac, who had traveled back in time from the 30th century to kill Clark before he could become Superman. After defeating Brainiac, the trio returned to their time, but not before Saturn Girl removed all memory of the incident from his mind. Nevertheless, the incident depicted all the strength and courage Clark would imbue as Superman.

Some time later, Clark began to discover his powers, and was sometimes frustrated by his need to hide them from the public. His parents revealed to him the spaceship, as well as a hologram, that arrived with him when he first came to Earth. Clark was told of the destruction of his planet and briefly met his real mother and father. With the full weight of his past revealed, Clark could begin to accept his growing powers.

As an adult, Clark is working at a newspaper in Metropolis, the city being the site of Lex Corp., a massive company advancing technology at a previously unheard of pace. Lex Corp. was lead by a man named Lex Luthor. Luthor was unscrupulous and his various experiments for profit or advancement of technology over any regard for human life would create/attract many kinds of trouble to Metropolis. Reporter Lois Lane had already been focusing on exposing Luthor, but was saddled with the newer Clark Kent to both give him some experience at the Daily Planet Newspaper and give Lois some aid, though according to intern Jimmy Olsen, their boss, Perry White, also just wanted someone to keep Lois out of legal trouble, and Clark was one of the few people willing to go along with the high-maintenance star-reporter as she looked for trouble.

Clark, having spent his youth moonlighting as an unexplained spandex-clad good Samaritan, finds he must resort to his Kryptonian alter-ego more often, both in the many more various act-of-God accidents that occur in the city as opposed to his more rural home, and the many more deliberately cause incidents created by criminals. As Lois Lane went looking to expose Lex Luthor and his company on a regular basis, Clark finds following her for his work also keeps him ahead of the curve for preventing tragedy and appears as the figure the papers call "Superman" more and more. In an effort to keep people from getting scared of the mysterious Superman who routinely swoops in at any given moment and help Lois advance her career, Clark appears as Superman to do a brief interview with Lois. Lois does not recognize Superman as being Clark Kent, mostly due to his mannerisms, but he point-blank tells her where he came from and that he is there in Metropolis only to do good.

As the series advances, Lois and Clark encounter more and more dangerous opponents, mostly due to Lex Luthor either intentionally helping turn crimes into super-crimes, or just as a consequence of doing business on the sort of advanced level he was, and attracted trouble to his company, and by proxy, Metropolis. Throughout the series, Lex nearly gets exposed many times, but always manages to cover-up his direct involvement. As Superman: The Animated Series leads into the Justice League series, Lex Luthor's exposure as a mad-man directly doing harm is finally revealed. Though Lex escapes arrest and is still able to do many crimes, his name is tarnished and he can no longer run his company. At that point, Superman realizes he will need allies to deal with crimes far beyond the reaches of Metropolis, thus he begins relying on the help of others with fantastic abilities to counter such world-threatening crimes and forms The Justice League.

As Superman, he wears a blue suit with a yellow emblem, a red border and the letter "S" inside. He also dons red cape, boots, and briefs with a yellow belt to go with the suit.

As Clark Kent, to hide his superhero identity, he wears framed glasses and occasionally wears a business suit.

Clark is an outright good Samaritan, doing good purely for its own sake. He sees the dangers of the world as temporary, and thus, the various problems that occur as things to be fixed when trouble comes up. Clark had trouble as a teenager coming to terms with his true identity, wondering if he was "Kal-El" or "Clark Kent". As an adult, he still wrestles with the concept, but under the blanket persona of "Superman", he could combine the two; a resident of Earth using his alien super-powers to protect his adoptive home. Eventually he settles on being more human than Kryptonian, with Krypton being more of a hobby to learn about and academically embrace himself in, and Kansas more or less being his home-planet.

Superman possessed powers of vast superhuman strength and speed, near-invulnerability, flight, super breath, heat vision, X-ray vision, telescopic/microscopic vision, super hearing, and a computer-like mind. He also has precise control over his body's muscles which gives him the ability to mimic seemingly anyone's voice, he once used this when impersonating a missing Batman. Lana Lang referred to him as a "boy genius."

While Superman was immensely strong both in terms of muscle power and ability to take physical punishment, he wasn't invincible. He could be injured, bleed, and conceivably be killed, and has sometimes been known to strain and sweat when performing superhuman feats of strength. In one notable instance, Superman was ambushed by Darkseid while catching his breath after using his own body to drill several holes in the ocean floor. In addition, being hit by the outer fringes of a blast from the Watchtower's Binary Fusion Generator, which was directly stated to have the punch of a small nuclear weapon, was sufficient to both cause severe pain and leave Superman floating unconscious in space, to the point where he had to be retrieved by Dr. Light while still incapacitated.

At full power, Superman was shown to be physically superior to the resurrected Darkseid, as he has defeated him many times. His physical strength surpasses that of Darkseid and rivals that of Doomsday. In addition, Superman rarely used all his powers to their full extent. On one occasion, he finally cut loose, revealing to Darkseid that the world was like cardboard to him before proceeding to send him across the city and through at least three or four skyscrapers with one punch. He was also able to hurl a huge comet through space to stop it from hitting Earth. When he was under Darkseid's control, Superman disintegrated the main wall of an alien fortress with his heat vision, then used it to make the building explode. He also killed a whole army of Parademons with a huge blast of heat vision. In the Batman Beyond timeline, Superman was shown to be strong enough to lift a skyscraper.

Being a Kryptonian, Superman ages much slower than a normal human, as shown in Batman Beyond, where he had remained in activity and was still in excellent physical condition (being only slightly wrinkled), while Batman had been forced to retire from his superhero career over 20 years earlier due to his old age. 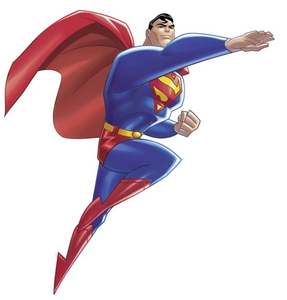 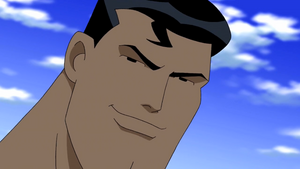 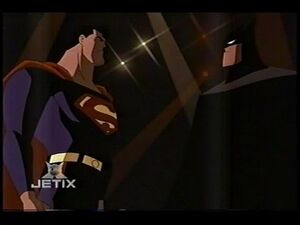 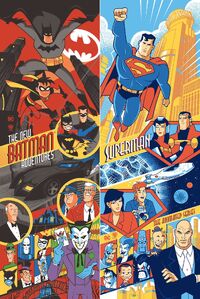 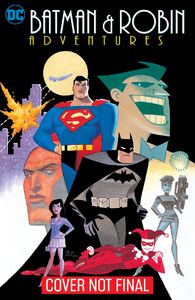 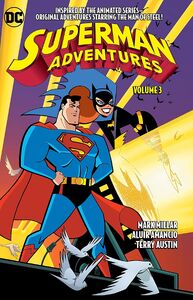