Kryptonian Superhuman Alien and Superhero and Reporter for the Daily Planet

Protect the Earth from extraterresial threats and criminals

Superman (also known by the alien name Kal-El and Clark Kent as a human) is the titular main protagonist in the 2013 Man of Steel film and the titular deuteragonist in its 2016 sequel Batman vs Superman: Dawn of Justice. He is portrayed by British actor Henry Cavill.

Kal-El was born on the planet Krypton, the first Kryptonian conceived naturally in over a thousand years. Before his homeworld was destroyed, his parents Jor-El and Lara Lor-Van placed him inside an escape vessel that would take him across space to Earth, a suitable planet where he could survive. Kal-El landed in Smallville, Kansas, where he was discovered by Jonathan and Martha Kent, a farming couple who adopted him and named him "Clark".

When Clark was 8 years old, his body began to change due to exposure to the yellow rays of Earth's sun. One day at school, his vision fluctuated to the point where he could see through solid objects. Moments later, he was able to burn things just by looking at them. Clark's mother arrived and helped him focus his vision through meditation.

When Clark was 13, the school bus fell off a bridge into a deep river, and he used his superhuman strength to push the bus back to dry land. His act of heroism was witnessed by all, and Clark's parents had to cover up what had happened. Jonathan revealed that Clark was an alien by showing him the spacecraft he arrived on Earth in. Clark frequently had to endure the torment of bullies, and his father encouraged him to not fight back because, with his powers, he should be defending those weaker than himself, not hurting them.

When Clark was 17, he had grown frustrated with having to hide his powers and expressed a desire to go out and see the world, which caused some tension with his parents. As the Kents were driving along a freeway, a tornado appeared. No one could drive away due to a traffic jam, so they ran for shelter. Jonathan stayed behind to rescue their dog, but realized he couldn't outrun the tornado. Clark desperately wanted to save his father, but even in his dying moments, Jonathan forbade him from showing his powers to the world.

Clark spent his adult years traveling the country in the hopes of finding out more about himself. Along the way, he took up various menial jobs under aliases which allowed him to help people out without drawing any attention to himself.

When he was 33 years old, Clark joined a military expedition on Ellesmere Island to uncover some unknown object buried beneath the ice. Clark found out that the object was a Kryptonian spaceship from long ago. The spaceship was infiltrated by a reporter named Lois Lane who was attacked by a Kryptonian security droid. Clark cauterized her wound with his heat vision and brought her back to camp. Lois then resolved to find out more about her mysterious rescuer.

As Clark ventured deeper into the spaceship, he was greeted by a hologram of his birth father Jor-El, who told Clark all about their home planet and how it was destroyed from within due to over-mining and neglect. Jor-El then gestured towards their family crest and told Clark it was a symbol of hope and that for Clark to learn even more about himself, he should push his limits.

Later, Clark stepped out of the ship wearing an old Kryptonian suit he had found with his family crest on it, and began to test the limit of his powers. He leaped into the air, gliding over mountains in a single bound. It occurred to Clark that he could go even higher just by using willpower, and he taught himself how to fly.

As Clark returned to Smallville, he encountered Lois, who had managed to track him down via his heroic deeds over the years. Lois offered to tell the world Clark's story so that he could gain some good publicity and not have to hide anymore, but Clark told her how his father died to protect his secret, which moved Lois to the point that she scrapped her story. Clark came home, telling his mother all about his alien heritage.

Later, Earth received a transmission from a Kryptonian UFO by General Zod, who demanded that Kal-El be handed to him or he would wreak havoc on Earth. After much pondering, Clark, wearing his costume, surrendered himself to the U.S. military. While in custody, he spoke with Lois, who told him that his family crest resembled an "S" and that he should call himself "Superman".

As Faora, one of Zod's soldiers, arrived to collect Superman, she demanded that Lois come with them. Lois willingly joined, but was made to wear a breathing device as the Kryptonian atmosphere on Zod's ship isn't suitable for humans. Superman met Zod and learned more about their planet's history, along with the fact that Zod had murdered Jor-El back on Krypton. Zod probed Superman's mind and tracked down his adoptive mother.

Superman got free; as he did so, he noticed Lois leave the ship in an escape pod that was quickly burning up. He went to rescue her, then tackled Zod after he threatened Martha, sending the Kryptonian general flying into the middle of Smallville. When Superman broke Zod's helmet, Zod's senses went haywire from exposure to Earth's oxygen, forcing him to retreat. Faora and a muscle-bound Kryptonian arrived and engaged Superman in a violent battle in the streets of Smallville. Superman was able to defeat the two.

Zod, meanwhile, found the Kryptonian scout ship in the Arctic which contained a birthing chamber that was required for artificially engineering Kryptonians. He piloted the ship over Metropolis, but Superman arrived to stop him. Zod protested that if Superman destroyed the scout ship, he would destroy Krypton's last hope of being reborn. Remembering how Jor-El told him about all the mistakes his people made which led to their demise, Superman declared "Krypton had its chance!" and destroyed the scout ship. After saving Lois' life one more time, they shared a kiss.

As the dust settled, Zod emerged from the wreckage of the scout ship and attacked Superman in a rage, destroying several buildings and figuring out how to fly whilst doing so. Superman got Zod in a headlock, but Zod used his newly-mastered heat vision to try and kill a nearby family, and Superman was forced to kill Zod in order to protect them. Faced with how he'd killed one of his own and made himself the last Kryptonian, Superman cried in anguish.

As Metropolis rebuilt itself, Superman destroyed a spy satellite and told the military that, while he would help them, he wouldn't be their weapon. Later, Clark and his mother talked about what he planned to do now that he was world-famous. Clark said he was taking up a job that allowed him to gain information without drawing attention to himself so he could be a better hero. Clark was then shown as an employee of the Daily Planet along with Lois. The Daily Planet is like his police scanner and know when Clark will be needed.

He just been Superman for 18 months, some people are praised by him and some are afraid of him. Bruce Wayne, thought of Superman as a threat. He is been investigating on Superman when Superman and Zod fought together. Clark has been investigating on Bruce himself. He thought of Batman as a scary vigilante or a criminal. Lex Luthor has been playing both sides on them, turn them against each other. Batman was that close to kill him, Superman didn't want to fight him because he is the good guy. Superman mentions Martha, Batman stopped. Bruce's mother Martha was killed by a mugger. Batman and Superman realize, they were both played by Lex Luthor and Superman wasn't a threat. They both teamed up with Diana Prince who is Wonder Woman to bring Luthor who framed Superman for the bombing of the capital. Lex created Doomsday to finish off Superman. Doomsday and Superman were both defeated and dead.

But Luthor is in prison, since Lois has evidence to put him away and clear Superman of any wrongdoing. They both had two funerals one for Superman that is a state memorial. His body is not on the casket. His body on the casket is buried in Smallville where Clark had his funeral with a lot of people who mourn him. Bruce, Diana, Martha and Lois were all their. Bruce and Diana decide to form a team to prevent alien abductions like Zod and Doomsday. With other Superheroes like them for the honor of Superman. Off-screen Superman is alive and being resurrected.

Clark is personified by his wholesome values and withdrawn nature. From an early age, he showed traits that he was more than ordinary, from his developing superpowers to his interest in philosophy, as well as his inherent desire to help others. His adoptive parents needed to constantly remind Clark that, while his intentions are noble, he needs to be mindful of the attention he may draw. Clark is always been an outsider and been bullied in school. Mostly he wanted to fight back, but his dad told him no matter how strong or powerful you are, never use your powers out of anger.

Clark can keep a cool head most of the time, but when push comes to shove, he can be extremely explosive. One notable example is when he destroyed the truck of an unruly trucker who made unwelcome advances toward a bar waitress. He showed an even more impressive display of anger when Zod came after his adoptive mother. He's also no pushover when it comes to authority figures, telling a U.S. general that he refuses to be a lapdog for the military.

Despite his isolated existence, Clark does care for the people around him. While he initially wanted to find out where he came from to end his loneliness, he would still give it all up to defend the planet that he calls home. Clark was never alone, but he had parents and people loved him back. The only reason why Clark became Superman, because of his birth and adopted parents taught him how to make a difference. 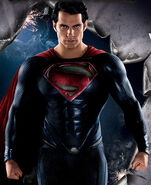 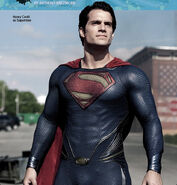 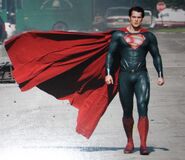 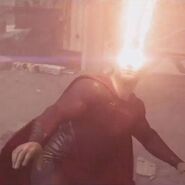 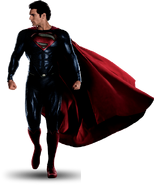 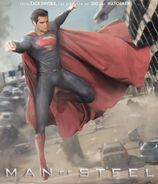 Retrieved from "https://hero.fandom.com/wiki/Superman_(DC_Extended_Universe)?oldid=802223"
Community content is available under CC-BY-SA unless otherwise noted.