Find a new home with her family (succeded)

Suri is Plio's young lemur daughter and a major character of Disney's 39th full-length animated feature film Dinosaur. She once lived on an island of lemurs with her family until the day the island was completely devastated by a meteor shower. Sole survivors, Suri and her family began a journey to find a new home, despite the dangers in their path. She is also Aladar's adoptive younger sister.

She is voiced by Hayden Panettiere, who also voiced Princess Dot in A Bug's Life and Kate in Alpha and Omega.

She is the most cheerful of the lemurs and eagerly wants to make new friends with the dinosaurs who lost their relatives. Suri is also a mischievous, sensitive, curious, fun-loving and proud to be a lemur. She was quite embarrassed when her mother mentioned mature topics, such as kissing.

Following the destruction of the island, Suri was very saddened by the loss of the other lemurs and tried to call them survivors until she slowly but no less sadly came to terms with the inevitable. After a day, she still mourned the losses but would eventually mourn.

In the horde, Suri proved to be quite tenacious despite the ruthless Kron and the living conditions of the voyage. She has also shown concern for the welfare of child iguanodons. Despite her tenacity, she was afraid of Carnotaurs. In the end, Suri proved to be particularly brave, showing no signs of giving up as things seemed to get worse until the group arrived at the nesting grounds that Suri was quick to explore.

Although not related by blood, Suri gets along well with her adoptive brother and was happy for him when Aladar became a father.

A few years after Aladar arrived on Lemur Island, Suri and two other young female lemurs were chased by a now-adult Aladar, and Suri ended up being swallowed by the iguanodon. Luckily, it all turned out to be a game, with Aladar spitting Suri out of the discomfort of her fur in his mouth. Suri and her friends then proceed to jump on Aladar to play attack him. Aladar pretends to die but Suri sees that he is faking it, which does not prevent her from blench when her big brother suddenly wakes up. Plio shows up, reminding the girls that they will miss the courtship while mentioning the "smooching" to the disgust and discomfort of Suri and her friends who leaves the scene when Aladar pretends to try to kiss them.

As dusk falls, Suri is at her mother's side cheering on the young adult females for courtship. When the big moment arrives, Suri laughs seeing Zini fallen into a bush. Shortly after the parade ends, everyone notices meteor showers in the sky. Curious, Suri climbs on Aladar's head to question him about the event but since he knows nothing about it, she climbs to the top of the bridal tree to then witness the huge meteorite crashing into the continent and caused another meteor shower hurtling over the island. Suri is petrified in fear until her mother responds to her distress and then the two lemurs return to Aladar who runs for their survival, retrieving Yar and Zini from the chaos. Cornered on the edge of a cliff, Aladar jumps into the ocean before a meteorite crushes them but the lemurs are separated from him in the fall and cling to the remains of floating trees while Aladar recovers them.

Reaching the shore, the family takes time to catch their breath while gazing at their ravaged island. Suri sadly tries to call for survivors but to no avail. More sad and troubled by the tragedy, Suri curls up in the arms of Plio who comforts her daughter as best she can in the face of the death of their fellow men. The place being unsafe, the lemurs ride on Aladar's back and begin a journey towards where the birds are headed.

Crossing the desert, Suri still cries until her grandfather assures her that they fear nothing when Zini suddenly spots a velociraptor. The family follows the creature to an arid plain and quickly finds themselves surrounded by other hungry raptors, but the group manages to escape in time, not without being chased by predators. The velociraptors give up after Aladar accidentally walks into a huge horde of dinosaurs. After being a little roughed up, the family chooses to continue following the horde to stay safe from the raptors. They go to meet the trio of old dinosaurs bringing up the rear, Baylene, Eema and Url. The lemurs are initially not well received by the two old ladies until Baylene sympathizes upon learning that they were the only ones left. Once Eema talks about the nesting ground, Suri asks if there are any other lemurs there, which Eema confirms. The family soon meets Kron, the overzealous leader of the horde and his second in command, Bruton. Kron quickly shows some contempt for lemurs.

For days and days, the horde advances in the boiling desert, without having anything to drink and the raptors continuing to follow them for a long time. Things take a turn for the better, however, when Aladar finds water underground from a dry lake, allowing the group to quench their thirst, but the selfish Kron quickly demands the water for himself and the rest of the horde arrives without moderation, forcing the four lemurs to take refuge on Baylene's long neck.

In the evening, Suri tries to play with the two little iguanodon children. Aladar asks her what she is doing and Suri reveals to him that the little ones have not drunk anything and are afraid of her, which she does not hesitate to claim. Once Aladar assured the cubs that they had nothing to fear from Suri, she invited the pair to follow them for water. When the cubs manage to get water by pressing into the dirt, Aladar congratulates Suri for earning their trust. Calm suddenly gives way to panic when Carnotaurs are spotted not far from the horde. Suri rides back with the rest of the lemurs on the back of an Aladar wanting to quickly join the marching horde but cannot bring himself to abandon the three elderly dinosaurs, leaving the horde to disappear over the horizon.

Advancing after dark, the group encounters a wounded Bruton refusing their help. They end up taking refuge in a dark cave when the rain falls. Shortly after Bruton reluctantly enters the cave, Suri is amused by the way Url bayed while on his back. A little later, the group is awakened by the presence of the two Carnotaurs outside. As they move deeper into the cavern, the Carnotaurs eventually spot Aladar and nearly kill him without Bruton's intervention. Unfortunately, the fight leads to the collapse of part of the ceiling, causing the death of one of the Carnotaurus but also that of Bruton.

Unable to turn back, the group walked the rest of the night until their path was stopped by a dead end in the morning. Zini then Suri immediately senses something coming from the other side and Zini manages to dig a small hole which releases the light of day. With Baylene's strength, the cul-de-sac collapses and reveals the nesting ground on the other side, much to everyone's delight. Finally arrived in his new home, Suri happily hurries up the tree-climbing path while Zini and Baylene enjoy the lake.

Some time after the death of the last Carnotaur and Kron, Suri is present at the birth of Aladar and Neera's first child and joins in the celebratory cries with the rest of her family and friends. 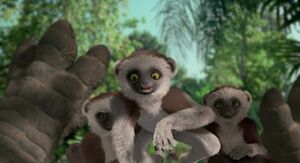 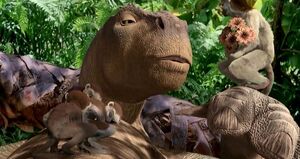 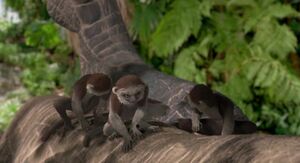 Suri embarrassed when her mother talks about "smooching". 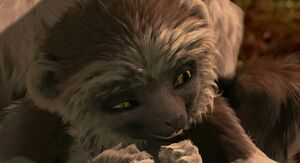 Suri laughs after seeing Zini fallen into a bush. 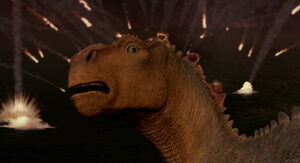 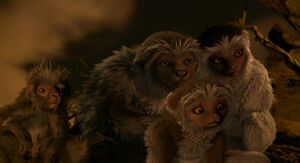 Suri and her family watch their ravaged island. 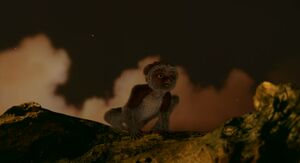 Suri saddened by the death of her fellows. 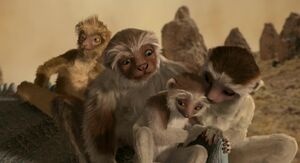 Suri starting to recover from the cataclysm as they walk through the desert. 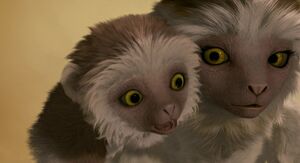 "Look at all the Aladars!" 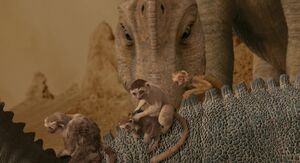 Lemurs get sniffed by Baylene. 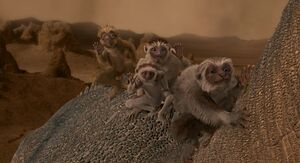 Suri and the other lemurs being noticed by Kron. 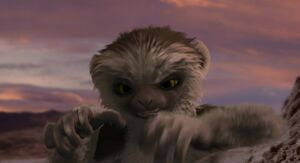 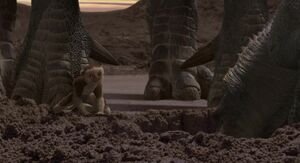 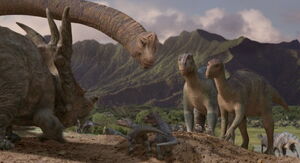 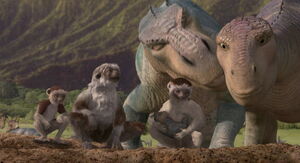 Suri and her family attend the birth of Aladar and Neera's first child.