Scouting Legion
Scout Regiment
The Scouts
The Wings of Freedom

Find out the identity of the Titans (original goal in foundation, succeeded)
Recapture Wall Maria to solve the food shortage crisis in the Walls (new main goal, succeeded)
Continue the studying and research on Titans so one day The Corps can gain sufficient knowledge (succeeded).
Gain and keep custody of Eren Yeager (succeeded).
Identify (succeeded) and kill the Warriors of Marley (abandoned).
Overthrow the Royal Government and install Military Rule (succeeded).
Exterminate the titans in order to free the humanity from their threat (former goal, abandoned).
Restore human expansion on Earth (abandoned when discovered the existence of nations)
Free Paradis Island from the Pure Titans (succeeded).
Explore the outside world (succeeded) and make peace with its peoples and trade Paradis' resources with them (failed).
Assist Eren Yeager in his Raid of Liberio (against their orders and wishes, succeeded).
Control Eren and Zeke Yeager or take their Titan powers (failed).
Stop the Yeagerists from conquering Paradis (failed, adandoned).
Team up with the Yeagerists and repel Marley's assault on Shiganshina (succeeded).
Defend Eldia (presumably abandoned).
Defeat Marley Empire (abandoned).
Stop Eren Yeager and the Rumbling, even at the cost of the Eldians' destruction (succeeded).

The Survey Crops, also known as the Recon Corps, Scouting Legion or Scout Regiment is the driving force of the plot and story as it is the branch of the Military most actively involved in Titan combat and human expansion. Despite having little to no success, they still symbolize "the hope of mankind", hoping that someday, their victory will change the world known to humanity, recovering what has been lost.

In the end only 5 soldiers from the old Survey Corps until the year 850 before the timeskip have survived in the finale: Levi Ackerman, Mikasa Ackerman, Armin Arlert, Jean Kirstein, and Connie Springer. The last survivors have been killed by Zeke Yeager and Bertholdt Hoover and Zeke's Titans in battle. All previous members died fighting against the Titans, the Titan Shifters, and the Royal Government of the Walls serving Rod Reiss. During the 4 years before the Raid on Liberio, numerous new soldiers from the Garrison, the Military Police, and the Training Corps joined the Survey Corps. However, Eren Yeager and Floch Forster later defected the Survey Corps to create their own military faction, the Yeagerists, and almost all of the new Survey Corps defected to join them, along with several Garrison and MP members, becoming the original first Yeagerists. The only ones who remained part of the Survey Corps during the Yeagerist uprising were the commander Hange Zoe, her direct 5 subordinates mentioned above, and 30 other soldiers including Varis, who were transformed into Pure Titans by Zeke. The majority of the original Yeagerists were killed by the military forces of Marley and by the remaining Survey Corps during the Revenge for Liberio and the Rumbling, and new Yeagerist members took control in their place. Hange also perished during the Rumbling. Keith Shadis, Historia Reiss and Reiner Braun also survived their time in the Survey Corps and later retired (or in Reiner's case defected); although Keith later dies fighting the Yeagerists during the Rumbling in 854.

This division of the military is in charge of the exploration and the eventual reclamation of human territory from Titan-infested land. Prior to the breach of Wall Maria, they explored the land outside of the Wall, though never getting far due to the heavy casualties suffered by Titans.

Presently, they have been laying down supplies from the Wall Rose Trost District to Wall Maria Shiganshina District in preparation to seal the breach and reclaim Wall Maria.

A more recent unofficial duty has been Titan observation and research. Given the safer nature of exploring within Wall territory (since Titans can only enter Wall at one point), a wealth of information has been revealed such as their tolerance of pain, sunlight dependence, and intelligence.

Since the Scouting Legion is constantly on the front line, fighting Titans, its high fatality, low success rate (if at all) discourages most people from joining the legion. Thus, the legion suffers an all-time personnel shortage and the only soldiers who enter the Scouting Legion are dedicated to the cause of humanity usually at the cost of their own lives.

While most soldiers do not survive their first expedition, each successive expedition exponentially increases their chances of survival. This fact makes the veterans some of the most experienced soldiers in the entire military.

Aside from personnel shortage, disciplines of the soldiers are the best out of the three military branches.

Unfortunately, this branch is also the most pressed one because despite being the best out of the three military branches in terms of soldiers' and officers' quality, the bureaucrats, rich conservatives and many Military Police members dislike the Scouting Legion and view it as a waste of money and resources due to the Legion's lack of definite, decisive successes and high losses of lives. Only from the 'support' of the king does the Legion still remain intact from the greedy bureaucrats and hostile conservatives.

Due to the constant horrific losses suffered at the hands of Titans, the Scouting Legion has been forced to fight smarter to achieve their goals.

Developed by Commander Erwin Smith, the key to this formation is Titan avoidance. Because the Scouting Legion cannot afford to fight every Titan out in the open, the entire Legion is spread out over a large area, maximizing visibility. Upon encountering a Titan, a red flare indicates the danger and all soldiers who see the flare fire a red flare of their own, allowing Irvin to quickly be alerted to the Titan's presence.

He will then fire a green flare in the desired direction to avoid this Titan with all members firing a green flare as well to allow the information to spread quickly. However, there are occasionally deviant-type Titans that understand the basic principle of this formation and will atempt to break it apart by ignoring scouts on the perimeter and instead, attack the middle of the formation. In this case, a black flare indicates the danger and the Titan is disposed of as quickly as possible.

This formation has lowered the Scouting Legion losses by 30%.

Although not a 'true' tactic in the sense of common battle doctrine, the Scouting Legion has been involved in two attempts at capture and are worthy of note given their similar procedures.

Before the Fall members (NC)

Mostly those who helped the Survey Corps during the uprising against the King of the Walls to support Historia:

​Marley and most (if not all) other world nations

The Government of the Walls

They act as secondary main antagonists and started acting during the Female Titan arc, mostly offscreen and using Nile Dok as a pawn to get Eren Yeager for Rod Reiss: 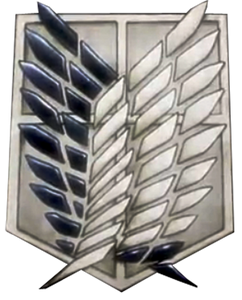