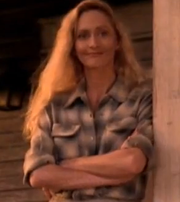 Susan Stern is one of the heroes of the 1994 Stephen King Apocalyptic Thriller, The Stand.

Part of an unwilling harem of women who were taken captive by evil superflu survivors and repeatedly raped, Susan—an ex-student at Kent State University—is one of the women Stuart Redman and his party rescues (note: this version of her earlier experience is only in the revised–expanded version of the novel.) Stern becomes a member of the original Boulder Free Zone Committee and recruits fellow captive, Dayna Jurgens, to serve as a spy on the West coast. Stern is later killed by Lauder’s bomb while in Brentner’s home.

In the miniseries, Susan is portrayed by Cynthia Garris. She is not rescued from the harem, instead found by Nick Andros and his party on the road to Nebraska, and arrives at Mother Abagail's home along with Nick, Tom Cullen, Ralph Brentner, Dick Ellis, and Gina McKone. After reaching Boulder, she begins a relationship with Brad Kitchener, the only technician, even trying to have children with him.