In Japanese mythology, Susanoo, the powerful storm god of Summer, is the brother of Amaterasu, the goddess of the Sun, and of Tsukuyomi, the god of the Moon. All three were born from Izanagi when he washed his face clean of the pollutants of Yomi, the underworld. Amaterasu was born when Izanagi washed out his left eye, Tsukuyomi was born from the washing of the right eye, and Susanoo from the washing of the nose. Susanoo used Totsuka-no-Tsurugi as his weapon.

The oldest sources for Susanoo myths are the ca. 712 CE Kojiki and ca. 720 CE Nihon Shoki. They tell of a long-standing rivalry between Susanoo and his sister. When he was to leave Heaven by orders of Izanagi, he went to bid his sister goodbye. Amaterasu was suspicious, but when Susanoo proposed a challenge to prove his sincerity, she accepted. Each of them took an object of the other's and from it birthed gods and goddesses. Amaterasu birthed three women from Susanoo's Totsuka-no-Tsurugi while he birthed five men from her necklace.

Claiming the gods were hers because they were born of her necklace, and the goddesses were his, he decided that he had won the challenge, as his item produced women. The two were content for a time, but Susanoo, the Storm God, became restless.

In a fit of rage, he destroyed his sister's rice fields, hurled a flayed pony at her loom, and killed one of her attendants. Amaterasu, who was in fury and grief, hid inside the Ama-no-Iwato ("heavenly rock cave"), thus effectively hiding the sun for a long period of time. Though she was persuaded to leave the cave (with the help of a ceremony and a unique style of dancing), Susano-o was punished by being banished from Heaven. He descended to the province of Izumo, where he met an elderly couple who told him that seven of their eight daughters had been devoured by the eight-headed dragon Yamata no Orochi and it was nearing time for their eighth, Kushinada-hime. 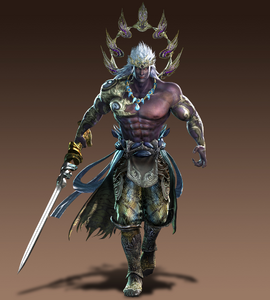