Swanky Kong is a member of the Kong Family who enjoys hosting game shows to help his clan.

He bares a physical resemblance to Donkey Kong but with bushier hair on his head and has a few gold teeth. In DKC2 and the GBA version of DKC3, he wears a typical blue game show host jacket with a number of sparkly rings on his fingers. However in original DKC3, he wears a flashy carny outfit consisting of a black bowler hat, white shirt, gold vest, black trousers and a pair of black and white shoes.

As a game show host Swanky plays fair and helps his clan win prizes. He seems to share the other Kongs dislike for the Kremlings as he used their likeness for targets at his sideshow.

He first appears at Swankys Bonus Bozana where he hosts game shows for Diddy Kong and Dixie Kong to try out. He awards them prizes if they win.

In the original game, he hosts a target game where he challenges Cranky and either Dixie or Kiddy Kong to hit as set number of targets.

In the GBA version, he disallows Kiddy from trying the virtual reality system as he is too young for it. 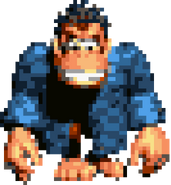