Sweden is one of the supporting characters in the Hetalia series. His human name is Berwald Oxenstierna.

He is voiced by Keiko Sakai in Japanese and Robert McCollum in English.

Sweden is the tallest of all five Nordics, and has short, light blond hair and greenish-blue eyes , usually he wear a dark-blue overcoat that appears to be the naval uniform of the 2nd commander from 1920 , a glasses , and he also quiet muscular. His face extremelly same with Germany but more stern and prominent . His physical age probably 21 years old

He is a best friend of Finland, who he has strong romantic feelings toward him (but Finland only call and treat Sweden as his best friend) . Sweden is described as very strong, as well as he able to defeat seven nations alone, and has numerous titles such as "The Lion of Northern Europe" , "The Conqueror Of The Baltic Sea",  and "The Supreme Ruler of Scandinavia". In modern times, he practiced neutrality in military matters; he has calmed down and currently puts his strength into welfare.

Calm, shy and deep down, he apparently takes interest in arguments and debates , and quite playful. However, due his intimidating aura , many others scare with him and thinking if he always angry , although he never fully realized if he actually scary. His hobbies include making furniture, glass crafts and art, and also he is skilled at sewing.

Sweden is one of the Scandinavian nations, which he a viking and one of the strongest nation on middle age. He later runaway along with Finland from Denmark, and he defeat him when Denmark try to sneak and attack them. After he not part of Kalmar-Union, Sweden able defeat seven nation alone and have many titles . However, he forced split from Finland after he defeat from Russia, and he make a hegemony with Norway. However, Their hegemony were not long, and Sweden decide to cut his hegemony with Norway before World War.Sweden decide to not participate on WW I and WW II , which he become one of the neutral nation since World War begin, even he shown try to help Finland during Winter war against Russia/Soviet Union. 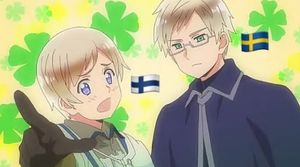 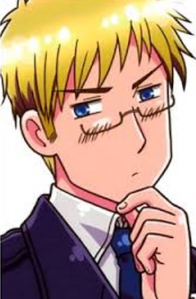 Retrieved from "https://hero.fandom.com/wiki/Sweden_(Hetalia)?oldid=1767503"
Community content is available under CC-BY-SA unless otherwise noted.