Steal anything that he can (succeeded and failed depending on the episode.)

On & Off Redeemed Villain

In Dora's World Adventure, Swiper also helps Dora to give back the friendship bracelets, and helps the other characters to stop their own antagonists who share the same traits as Swiper. In ""Swiper Explorer" he decided to help Dora and Boots to return the baby fox with whom he became friends with to his parents. In "Bark Bark To Play Park" he shows that he's also an animal lover (although this is somewhat bizarre as he is an animal himself) as he was revealed to be the owner of one of the two twin puppies.

In the Dora Saves the Mermaids movie, Swiper assists Dora, Diego and Boots to clean up the disastrous trash all over the Mermaid Kingdom.

Swiper is sneaky and rude, but it seems that he also has a friendly side as he helps the protagonists in their adventures. He might love stealing things, but he also shows that he cares for other and he's also an animal lover (despite being an animal himself). He shows that he can be very friendly and nice when the other characters give him a chance. 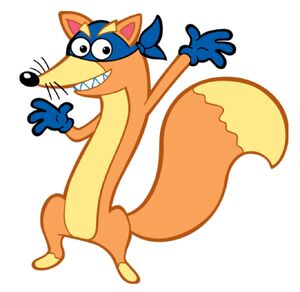 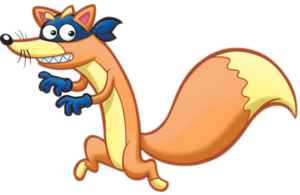 Retrieved from "https://hero.fandom.com/wiki/Swiper_the_Fox?oldid=2315605"
Community content is available under CC-BY-SA unless otherwise noted.