Promoting items and weapons for prices

Provide Unknown Soldiers necessary items, weapons to destroy Emperor Bios and his armies - all at a price.

Sylphie, also referred to as Mirabella in North American version of Sega Genesis, is a character in Forgotten Worlds (Lost Worlds in Japan), the classic Capcom 1988 arcade shoot 'em up video game. She first appeared as a non-playable character and her role in the store throughout the game is the shopkeeper to sell the Unknown Soldiers different weapons, armor, items and information for a cost of monetary currency called Zenny, which is featured in many Capcom games like Mega Man and Breath of Fire series. Outside of Forgotten Worlds, she later made her appearances in 2 Capcom crossover games: Namco X Capcom as both ally and shopkeeper and Project X Zone 2 as event-only character once again.

Sylphie appears as a weapons dealer who is responsible for selling armors and other items to the anonymous space marines in exchange for Zenny and hinting them how to defeat the end bosses of the respective stages in the game. Her shop can be located in each stage. If one of the Unknown Soldiers gets in, then Soldiers are considered as guests and the duo find themselves inside her shop. Then they have a limited amount of time to buy important goods for achieving the heroic goals against Bios and his evil army. Throughout the game, Sylphie's shop will appear once per stage. But, if Unknown Soldiers misses her shop, her shop will appear before the Soldiers once again, giving the Soldiers one more chance to enter her shop to buy whatever items they need. In few particular stages under particular circumstances however, Sylphie's shop may appear more than once.

Sylphie is just as much a mysterious figure as Unknown Soldiers: throughout the game, her shops appear from surfacing beneath the ground in zones which has been long deemed as enemy territories during thick battles. While appearing her shop is completely unharmed by shots exchanged between Unknown Soldiers and Bios' warriors. And once Unknown Soldiers manage to get into her shop, everything that moved up until that point comes to a sudden stop, as if the flow of time had stopped. Also, Bios' men cannot enter her shop.

Once inside, Unknown Soldiers are completely safe from enemies outside within the limited time they are allowed to stay in the shop. And after duos leave Sylphie's shop, it is vanished completely, as if whether it was there in the first place at all. The flow of time, then, begins to resume and Unknown Soldiers will find themselves engaging battle with Bios' forces. Amazingly during the final stage of Unknown Soldiers fly to the top of the Tower of Bios in a bid to kill him, Sylphie opens her shop even inside the tower, right in the middle of the final boss' sanctuary and where the cosmic tyrant observes the whole event yet does nothing to stop her. In spite of having displayed said uncanny abilities, for reasons unknown Sylphie never confronts Bios directly, but instead lends Unknown Soldiers her items and weapons so they can defeat Bios.

Anyway, after Bios is destroyed by Unknown Soldiers in a final duel, Sylphie praises the victory over the evil emperor and expresses her gratitude to the Unknown Soldiers once the world is saved at the end of the game. With that she, along with the survivors of humanity, vows to rebuild the forgotten world back to its former prosperity no matter how many years it might take them to do so. She prays that may there never be another evil being like Bios appear again.

In this crossover entry, along with the two anonymous soldiers, Sylphie serves her 2 roles: shopkeeper and ally. She joined forces with Reiji, Xianmu and the heroic allies of both Namco and Capcom dimensions to fight evil while taking the time to do their job in her shrewd way though. In combat, she has a tactical set of moves lifted from Capcom video games like Pirate Ship Higemaru and Alien vs. Predator, the arcade-exclusive title.

She is voiced by Rie Tanaka.

Sylphie bows to greet you in her shop throughout the game. 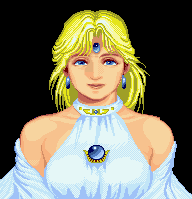 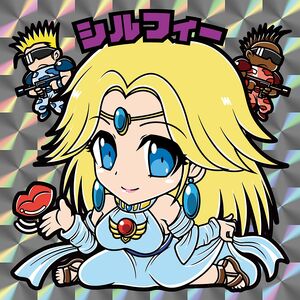 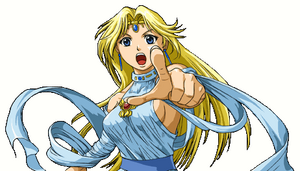 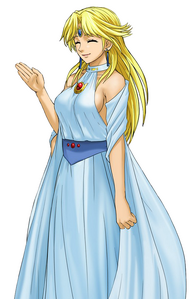