Lead the Forsaken to victory and defeat the Scourge
Gain full control of the Val'kyr by enslaving the Val'kyr Queen (failed, was halted by Greymane)

Sylvanas Windrunner is the Banshee Queen of the Forsaken undead in the Warcraft franchise. When she was alive, she fought the former Lich King Arthas in the Third War, and was killed and resurrected by him as an undead. After Illidan's attack on the Lich King during the events of the Frozen Throne, she along with many others, was freed from the will of the Lich King. Sylvanas later established her own faction called the 'Forsaken'. She calls herself the Dark Lady and the Queen of the Forsaken.

During her lifetime, Sylvanas had long blonde hair that "floated like water" and was "translucent in sunlight". She took great care of her appearance: "It wasn't enough for her to be the best huntress in the family. She also had to be breathtakingly beautiful for all those who had the honor of meeting her. She was of such vanity." Her eyes were "grayer than green or blue."

After becoming a banshee, Sylvanas now has a pale, bluish skin, although she is in better conditions than most of the other undead who are visibly decaying in appearance. Her skin shines with a white or silvery glow that becomes red when she is agitated. Her hair, once blonde, is now black as night and strewn with white locks. Sylvanas still wears the garment she was wearing at the time of her death, although her coloring has been darkened. For some reason, her body bears no scars from the countless wounds she received on the day she died, as when she was alive, she prefers to remain hooded.

Her leather clothing is sparse to allow for fluid movements, and to showcase the fact that she need feel no fear of any kind of harm. She wears a detailed chest plate that exposes her toned midriff, and greaves atop light, green cotton trousers. Her gauntlets are decorated with a large gem on each, and her spaulders are adorned with spikes, skulls and white feathers than match her own blanched hair. She wears a crimson hooded cloak, tattered and ripped at the bottom, the hood of which is nearly always up. She keeps her quiver and her bow slung across her back most of the time, and can often be seen with her two blades sheathed at her waist.

Sylvanas was originally a High Elf of Quel'thalas, at a young age Sylvanas displayed exceptional skills at being a ranger, advancing in the ranks until eventually earning the position of Ranger-General. When the scourge invaded Quel'thalas during the events of Warcraft 3: Reign of Chaos, Sylvanas valiantly defended her homeland delaying the scourge while the High Elves attempted to create a defense. The scourge however eventually overwhelmed her forces breaking through, the Lordaeron Prince Arthas Menethil (now a Death Knight) killing Sylvanas himself and raising her as an incorporeal banshee in his service as punishment for hindering his invasion of Quel'thalas. Prince Arthas' master the Lich King gradually lost control over the undead, a result of an attack by Illidan Stormrage and his forces on the Lich Kings fortress, the Frozen Throne in Northrend. Thanks to this loss of control, Sylvanas regained her free will and physical body before launching an attack on Prince Arthas. Although fleeing to Northrend, Sylvanas chose not to pursue Prince Arthas just yet, but rather recruiting the majority of free-willed undead under her service and renaming themselves the 'Forsaken'. Sylvanas and the Forsaken hold a tense relationship with the Horde. Sylvanas and the Forsaken joined the Horde to increase their latitude. She later sent supplies and soldiers to help the Blood Elves and even helped them joined the Horde. Sylvanas shows emotion when an adventurer shows her sister's necklace although she keeps them hidden.

After Arthas' death, Sylvanas tries to capture Lordaeron for the Forsaken. Not amused with Koltira's friendship with the Alliance death knight Thaurissan, she brings him to Undercity to warp his memories.

As commander of the Forsaken and Horde forces in the Eastern Kingdoms , Sylvanas showed her military genius. Before her death, being the younger sister of Alleria and the older sister of Vereesa, she was also a ranger-general from the high elf kingdom in Quel'Thalas . After being resurrected by Arthas, Sylvanas was motivated, for the most part, by revenge; and later by the will to survive at all costs and thus avoid the hell that awaited her. Later, she along with a small group of undead elves, regained free will and led her forces against the Dreadlords who ruled Lordaeron.

Eventually she gained independence by killing two dreadlords and enslaving one of them, Varimathras . She called her group of undead troops as the Forsaken and proclaimed herself as their queen. While Sylvanas was a skillful and highly capable administrator, having built a nation from nothing to become one of the most powerful and feared factions in Azeroth, she was also a cold and amoral leader, who gave little care to her subjects beyond their role as instruments, whether as arrows to kill in her name or as shields to protect her from her enemies. Under her command, the Forsaken dealt not only with the Scourge, but also with the Scarlet Crusade. Sylvanas has a special commanding and tactical talent, which in combination with the mastery of the art of archery makes her a powerful queen. She is also adept at the magic of demons. She has the ability to drain life, summon skeletons and mind control. 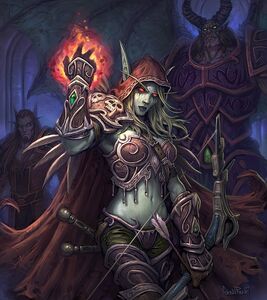 Sylvanas Windrunner
Add a photo to this gallery
Retrieved from "https://hero.fandom.com/wiki/Sylvanas_Windrunner?oldid=1754398"
Community content is available under CC-BY-SA unless otherwise noted.