Fairy Type Eeveelution
Sylveon is one of Eevee's evolved forms from the sixth generation of Pokémon. It evolves from Eevee when it levels up with a Fairy-type move.

Sylveon is a quadrupedal Pokémon with mostly pale cream-colored fur, with it's ears, tail, and feet being a pinkish color. It has two bows on it's body, one on it's left ear and the other on it's neck, which both have two feelers extending from them. The bows are colored pale cream, with their centers being a pinkish color. It's has short and slender legs and small paws with three visible toes on each foot. It's eyes are light blue with small white pupils and no sclera. It has two pointed teeth on it's upper jaw that can only be seen when it's mouth is open. It's furry pink tail is slightly curved in a crescent shape.

Sylveon's first main anime appearance was in the episode Kindergarten Chaos!, where it was owned by a kindergarten teacher named Penelope.

Serena's Eevee evolved into a Sylveon in the episode Party Dancecapades during a Tag Battle alongside Ash's Pikachu against James's Inkay and Miette's Slurpuff.

A Sylveon owned by Valerie appeared in the A Fashionable Battle! and Fairy-Type Trickery!. 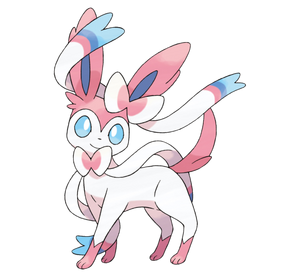 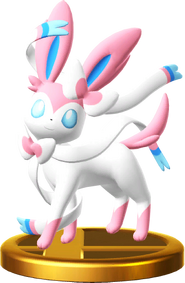 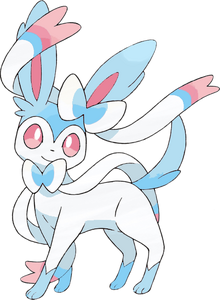 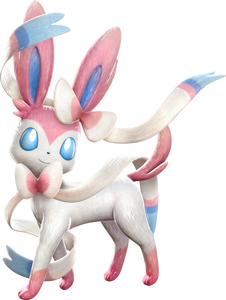