Capture and eat Tweety and Speedy

Sylvester J. Pussycat, Sr. (Sylvester the Cat or simply Sylvester), is a fictional character, a three-time Academy Award-winning anthropomorphic Tuxedo cat in the Looney Tunes and Merrie Melodies repertory, often chasing Tweety Bird, Speedy Gonzales, or Hippety Hopper. The name "Sylvester" is a play on Felis silvestris, the scientific name for the wild cat species (domestic cats like Sylvester, though, are actually Felis catus). The character debuted in Friz Freleng's Life With Feathers (1945). Freleng's 1947 cartoon Tweetie Pie was the first pairing of Tweety with Sylvester, and the Bob Clampett-directed Kitty Kornered (1946) was Sylvester's first pairing with Porky Pig. Sylvester appeared in 103 cartoons in the golden age.

Pitted against Tweety, Sylvester is a brutal but clumsy predator. He is a lazy mouser and an incompetent hunter, so his focus on catching Tweety is mostly obsession. Like Wile E. Coyote, Tom the Cat, and other cartoon hunters, Sylvester's reason for being is to catch and kill the little creature who always escapes him, and is always doomed to fail. Also like these characters he will use any means possible to catch his prey, by carefully placed traps, brute force, disguises or mail-order weapons.

In the cartoon Satan's Waitin' he shows how evil he is when he is killed in one of his attempts, and is sent to cat-Hell. Since he has nine lives, he is allowed to go back. When seven of his other lives are lost, he decides to give up chasing Tweety and makes a home in a bank vault. This backfires when two robbers blow up the vault, sending them, and Sylvester back to Hell.

Sylvester's personality in the early shorts tends to vary depending on which director handled him. Friz Freleng first paired him against Tweety Bird and Speedy, but other directors paired him with other characters, and not always as a villain. In Bob Clampett's cartoon Kitty Kornered, Sylvester teams up with other cats to lock Porky out of the house in revenge for putting them out for the night.

Robert McKimson gave Sylvester a son, Sylvester Jr. who Sylvester tries (and fails) to train in mouse-catching. These cartoons also pit him against Hippetty-Hopper, a baby kangaroo Sylvester always mistakes for a giant mouse.

In Chuck Jones' shorts, he is Porky's cowardly pet cat, and most differently, does not speak. These are the only cartoons that show Sylvester as a hero, trying to protect an oblivious Porky from danger all around him. 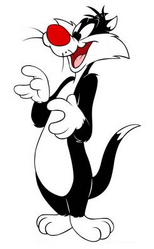 Sylvester in The Looney Tunes Show 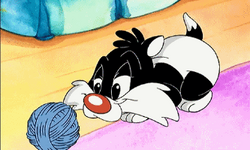 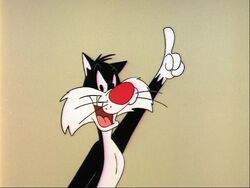 Sylvester in Sylvester and Tweety Mysteries 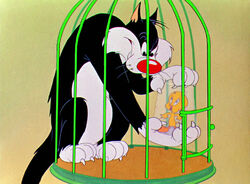 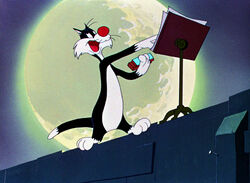 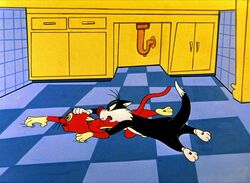 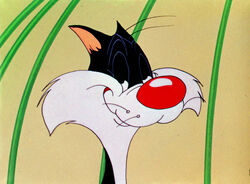 Sylvester in Who Framed Roger Rabbit 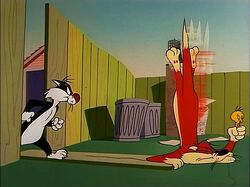 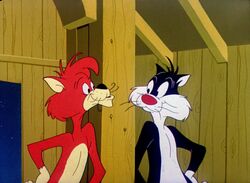 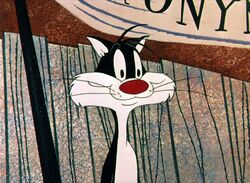 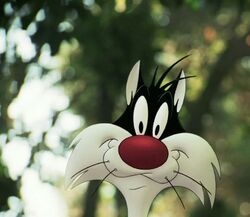 Sylvester in Looney Tunes: Back in Action
Add a photo to this gallery
Retrieved from "https://hero.fandom.com/wiki/Sylvester_J._Pussycat_Sr.?oldid=974296"
Community content is available under CC-BY-SA unless otherwise noted.