Exploring the universe with her closet friend, Wander, eating jellyfish pie (even though her best fiend hates it)

Commander Peepers (sometimes)
Westley
All good side of population of galaxy

Sylvia is the deuteragonist of Wander Over Yonder.

She is Wander's loyal, although bullish steed and best friend, who explores and travels the universe with him. Sylvia will never back down from a fight and loves to be in a fight. Even though Sylvia is tough, there are soft spots deep in her heart, mainly for Wander since he is her best friend/companion. She was voiced by April Winchell also voices Muriel Finster. In the Japanese dub from the series, she was voiced by Masako Katsuki.

Sylvia is blue with a long neck, stubby three fingered arms, and big expressive black eyes. She has a black and yellow rein wrapped around her muzzle and a big floppy tuft of bright pink/orange hair jutting upward from her head, matching the tuft of fur on the tip of her tail. While she is sometimes referred to as Wander's horse, she is actually one of a species called "Zbornak".

Sylvia is a member of a beast of burden species called the Zbornak. We don't know yet if her entire race has her aggressive temperament, but we've seen that her family definitely does. She and Wander are inseparable best friends, and she feels protective of him. She also has an appetite as big as her heart; and a temper as big as the galaxy. She's not quite as optimistic as Wander is, but she tries to be patient with his antics, and indulges him lovingly until she is too tired or stressed to go on. 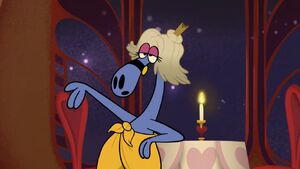 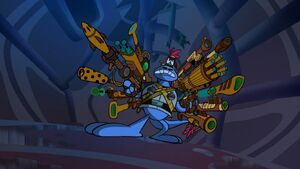