Like the main timeline version of Loki Laufeyson, the girl later known as Sylvie was born to the Frost Giant Laufey and adopted by the Asgardian Royal Family as a baby. However, she was kidnapped by the Time Variance Authority as a child for inadvertently causing a branch from the Sacred Timeline. After escaping from the TVA, Loki changed her name to Sylvie and went on the run throughout time and space whilst also plotting revenge against those who tore her away from her reality.

After years of planning, Sylvie was ready to topple the Time Variance Authority and their leaders known as the Time-Keepers. However, her attempt was inadvertently thwarted by another Variant of Loki who had been brought in by the TVA to hunt her down. Sylvie and the Loki in question became stranded together on the planet Lamentis-1, where they were forced to work together to survive an impending apocalypse and ended up falling in love.

Sylvie Laufeydottir is portrayed by Sophia Di Martino as an adult and by Cailey Fleming, who also played a young Rey in Star Wars, as a child. While possessing the bodies of others, she was portrayed by Sasha Lane, Lucius Baston, Wunmi Mosaku, Austin Freeman and Hawk Walts.

Like the Sacred Timeline version of Loki, this variant was born to the Frost Giant Laufey and was adopted into the Asgardian Royal Family. However, unlike the main Loki, she was informed at an early age that she was adopted, thus preventing her from holding a grudge against her adoptive family.

Due to being a variant and unknowingly creating a nexus event that altered course from the Sacred Timeline, she was kidnapped by the Time Variance Authority Hunter Ravonna Renslayer. The TVA destroyed her reality by using a reset charge, and put her in front of a judge to face her charges. The variant managed to escape and used a TemPad to escape through a timedoor, thus preventing her from being "pruned" or going through a reset.

Becoming a fugitive of the TVA, the variant changed her name to "Sylvie" to keep an alias, and vowed to get revenge on the TVA for destroying her reality. While on the run, Sylvie became skilled in the use of sorcery, and was even capable of using her magic in the TVA despite it not being possible to do so. Sylvie's main goal was to destroy the TVA for their actions, and free the Sacred Timeline.

Putting her plans into motion, Sylvie would travel to different years and centuries to lure the minutemen, kill them and collect their reset charges. She was spotted by a young boy in 1549 when attacking the minutemen, but bribed him with Kablooie chewing gum and escaped. Due to the boy spotting her, he believed she was the devil and would lead the investigation of the variant by Mobius. Sylvie continued with her plan by luring and slaughtering more minutemen, and eventually used her magic to posses Hunter C-20 before kidnapping her.

When putting Hunter C-20 through an illusion in 2050, Sylvie learned that the hunter's memory was clouded, and that the TVA were using variants as hunters. Pretending to be a friend, Sylvie managed to gain information about where the Time-Keepers were located, but was interrupted by the TVA arriving in 2050 with one of her own variants, Variant L1130.

Sylvie battled the variant by possessing hunters and random civilians to stall time, which allowed the reset charges she collected cause the sacred timeline to be altered. She escaped through a Time Door to the TVA headquarters, but was followed by Loki. 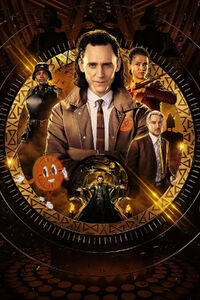 Shrouded Sylvie (middle right) on a poster for the Loki series. 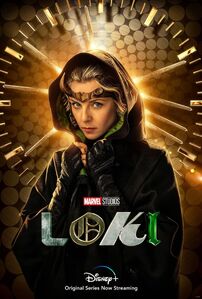 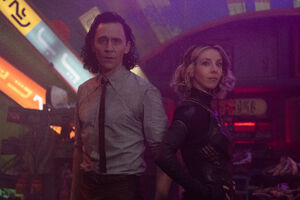