The Syrinx is one of the three playable ships in Thunder Force VI. It is considered as a fighter with an unknown power due to the combination of technologies involved on its creation.

The starfighter was originally conceived for release on the Sega Dreamcast, however, due to Tecno Soft (Techosoft) dissolving in 2001, the fighter's true alias never saw the light of day.

However, in the revised version of Thunder Force IV, the craft first appears when the RVR-00 Phoenix destroys the ORN Faust and the Vasteel Nocht, causing the core of the machine to make contact with the starfighter and transforming it into an unknown ship dubbed the Syrinx. Its firepower being similar, but superior to that of the Phoenix. The mysterious ship goes on to destroy the ORN Emperor, the last known climatic event in the series so far. 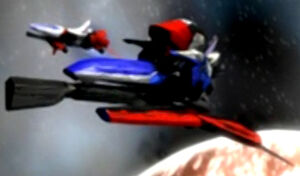