Captain of the 10th Division

Napping to try and grow taller

Tōshirō Hitsugaya is a supporting character in the Bleach franchise. He is the captain of the 10th Division of the Gotei 13 and the youngest Soul Reaper ever to achieve the rank. Previously, he served under Isshin Kurosaki, the father of Ichigo Kurosaki. His lieutenant is Rangiku Matsumoto.

Tōshirō takes the appearance of a very short teenager boy, with turquoise eyes and short, spiked, white hair, which tends to draw attention in the Human World. He wears a standard sleeveless captain's haori with a green sash around his shoulders, held together by a round, star-like clip. The sash holds his Zanpakutō's sheath in place on his back and is tied to it at either end. He sometimes walks around in his tabi. He is relatively young by Shinigami standards, and has the appearance of a child. In the Human World, he wears a black, short-sleeved, golf shirt and gray pants. He also wore the uniform of Karakura High School.

Before Tōshirō was a captain, his hair was not as spiky, with only a few spikes here and there. He also wore the standard Shinigami outfit, but with the addition of the 10th Division's insignia on the left breast of his outfit.

17 months following Aizen's defeat, shortly after Ichigo regains his Shinigami powers, Tōshirō appears sporting a hairstyle similar to that before he became a Shinigami, and a long turquoise scarf. His green sash has also changed to a thin chain, but still retains the star-like clip.

After training for an unspecified amount of time in preparation to fight the Wandenreich, Tōshirō's hair appears to have grown longer, his fringe now reaching down to his eyes despite being held up by a newly acquired bandanna. He also appears lankier than before, with his robes loosely hanging off of his body.

After being zombified by Giselle Gewelle, Hitsugaya's appearance changes dramatically. He now wears a white double-breasted trench coat with black lapels that is fastened by four buttons on either side and which has a badge with a six-pointed cross on its left breast. He has a black belt with a large buckle around his waist, slightly baggy white pants, and white boots with furry black liners. He retains the thin chain holding his Zanpakutō's sheath around his upper torso.

Tōshirō maintains a very serious and mature attitude. This is almost the complete opposite of Rangiku, but they are still close despite this. Tōshirō is very protective of Momo due to their friendship from when they were children. He is easily annoyed when people don’t act seriously or draw unnecessary attention. He also dislikes childish things or when people treat him like he’s a child. Tōshirō has a strong work ethic, but it seems that he only wants to finish quickly so he can take his afternoon nap, believing that it might help him grow taller. Tōshirō also has a very cold and calm attitude, which may be due to people constantly joking about him. This attitude allows him to deal with the jokes and keep up his duties.

Though Tōshirō does get angered when people mock him, he doesn’t overreact or take action against them unless they’re his enemies. However, he hates it when people don’t address him as “Captain Hitsugaya”, since he worked very hard to get that title and only lets Momo get away with using his first name. Most people comply, with the only exception being Ichigo, which Tōshirō constantly calls him out for. During Tōshirō’s fight with Gin, Gin noted that Tōshirō is supposed to be the embodiment of a heavenly guardian reincarnated every few centuries. Tōshirō dislikes warm weather, his favourite foods are watermelon and amanatto, and in his childhood, he was champion at spinning tops. Captain Ukitake also comically gives Tōshirō candy and snacks because they have similar names and white hair, so they both have the nickname, “Shirō-chan”.

As a captain, Tōshirō possesses incredible spiritual power, with his spiritual energy being described as very large and cold and he is very good at hiding it, able to sneak on people frequently. Tōshirō also possesses a mastery of swordsmanship, only using the released abilities of his Zanpakuto when things get tough. He is considered a child prodigy in terms of intellect, able to graduate Shinigami Academy in only a year. Tōshirō possesses great battle instincts and is skilled at analyzing an opponent’s abilities, then thinking of a strategy. He has demonstrated that he is a capable leader, often being chosen to lead missions for the Gotei 13. Tōshirō is highly resilient towards attacks and physically strong and possesses mastery of both Shunpo, a Shinigami technique that lets him move at high speeds, to the point that it resembles teleporting, and Kido, able to perform powerful spells with no incantation. Like all Shinigami, Tōshirō’s primary weapon is his Zanpakuto, Hyōrinmaru, which is the strongest ice-type Zanpakuto in the Soul Society. He can release its Shikai form with the release command “Sit upon the frozen heavens”, making its blade increase in length and giving it a cresent-shaped blade attached to the hilt via a long metal chain that can extend and entangle an opponent.

When its in Shikai form, Tōshirō can control ice and water and by slashing, he can generate huge flows of ice shaped like Chinese dragons that freeze whatever they hit. He can also slash at the ground to form a wave of ice and the chain blade freezes whatever it entangles. When using Hyōrinmaru’s Shikai, Tōshirō can use the technique, Tenso Jurin, where he can control the water in the surrounding atmosphere. He can also use this technique in Bankai, but he doesn’t like doing so since he’s not sure whether he could control it enough to keep it from killing everyone around him.

Like most of the other captains, Tōshirō can release his Bankai, Daiguren Hyōrinmaru, where ice flows onto his body, forming icy armor with a dragon tail and wings, as well as claws on his left hand and feet and a dragon-head on his right hand. Three flowers of ice form above him, which disappear petal by petal as the energy of his Bankai is consumed. It is speculated that when the flowers are gone, Tōshirō’s Bankai will disappear, which is most likely due to his Bankai being incomplete due to his young age. In Bankai, Tōshirō’s power is even greater and he can use more techniques along with his previous ones. He can regenerate his Bankai as long as there is water in the air and use his ice wings as a shield. Tōshirō can also use Zanhyo Ningyo, where he can create a double of himself out of ice that is so life-like that it can seem to bleed, but he says it usually only works once on an opponent. Tōshirō can also use Ryusenka, where he stabs his opponent, causing ice to burst from the hit, encasing his opponent before Tōshirō shatters them. He can also use Sennen Hyoro, where he creates numerous ice pillars around him and his opponent, which on his command, move in on his opponent and crush them.

Despite the attack’s great power, Tōshirō implies that it take quite some time to prepare so he has to distract his enemy so that it works. Tōshirō’s next technique is Guncho Tsurara, where he transforms water into ice and swings it in an arc, firing dagger-like shards of ice. Another technique is Hyoryu Senbi, where he swings his sword in a linear direction to create a huge flow of ice in a crescent shape and he can then control it and send it into the air.

Tōshirō’s last technique is Hyoten Hyakkaso, which is an extension of Tenso Jurin, but he rarely uses it. This technique opens a huge hole in the clouds making snow fall on his opponent. When the flakes touch their body, each one blooms in ice flowers, developing into a pillar of ice. Tōshirō states that when all 100 flowers bloom, his opponent will be dead.

Tōshirō angry at Rangiku for interrupting his paperwork

Tōshirō stopping the fight between Kira and Momo

Tōshirō and Ichigo working together to defeat Kusaka 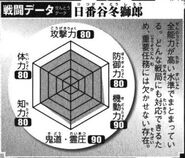