Tadakatsu Honda or Iron Ox, is a character from the Sengoku Basara series. He is a giant clad in thick armor draped with gold prayer beads and iron antlers protruding from the helmet, possessing great strength in each of his blows. He is most closely associated with Ieyasu Tokugawa, and sometimes lets him sit on one shoulder. He cannot talk, so players don't know what he is thinking unless they can translate the noises he makes, sometimes written as long lengths of exclamation points. He wields a huge drill-spear, with which he can do a considerable amount of damage and his element is lightning.

Tadakatsu Honda is depicted as a huge robot. More specifically, his intro sequences are very much like launch sequences from the Gundam series although his method of getting around the battlefield is more akin to a Dom of the same series. Due to this, he gets a nickname among fans as "Hondam". Being a robot/Gundam, Tadakatsu cannot speak, but rather he makes mechanical sounds for his responses (if not actions). This robotic appearance somewhat reflects his title of being the Strongest of the Sengoku.

He is a very loyal retainer of Tokugawa Ieyasu, and considered his "ace"/best fighter. He always appears to the aid of his lord (it is even reflected in Ieyasu's skillset in Sengoku BASARA 2 Heroes, where he calls upon Tadakatsu to ride on and attack). As such, he would always follow Ieyasu's orders (usually to attack the enemy). Whenever he appears in battles, as much as possible, he keeps true to his title defeating nearly every enemy he faces, or proving to be a great challenge to them. However, when the battle turns to the favor of the enemy, he is very much willing to sacrifice himself to protect/save his lord.

Hondam's main focus is his modes. He can activate various weapons and equipment from his backpack, all of which will have various effects on him. Additionally, his drill charging skills also gains some additional effects depending on which mode is active. His Basara attack is also one of the strongest in the game, as it can easily clear the screen of regular enemies, but disables camera movement for its duration preventing the player from hitting enemies behind limiting its potential (this is fixed in Sengoku Basara 3, as the player can now move the camera). His S-String is also one of the hardest to control after a certain point (though this became more manageable in Sengoku Basara 3).

In Sengoku Basara 3, Hondam's modes are expanded. Modes can be mixed for different results (like Flight Mode enables movement in Cannon Mode). Hondam's Flight Mode actually enables him to fly, allowing him to avoid some enemies and/or obstables as well as allowing bomber runs with Cannon Mode. Cannon Mode allows the player to aim the cannon, but normally disables movement. Hondam also gains a new Heavy mode which changes all of his attacks, but disables guards and slows down movement. Additionally, when dashing, Hondam can break boxes and some fences as well as damage enemies by simply bumping them.

Due to his size, Hondam is unable to mount horses. Instead, players can use his jetpacks/boosters as an alternative. Additionally, for the same reason, Hondam is immune to grabs and similar moves (such as Motochika's net), though he will still take some damage. 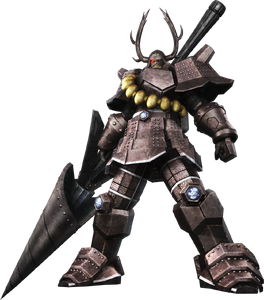 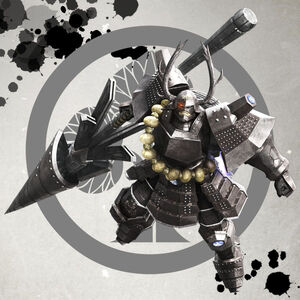 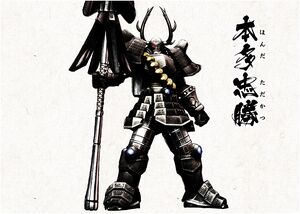 Retrieved from "https://hero.fandom.com/wiki/Tadakatsu_Honda_(Sengoku_BASARA)?oldid=2278833"
Community content is available under CC-BY-SA unless otherwise noted.