To keep Vanellope from racing (formerly).

To win at all costs (even it means cheating).

Taffyta Muttonfudge is one of the racers in the video game Sugar Rush and a (former) antagonist turned anti-hero of the 2012 Disney film, Wreck-It Ralph and a minor character in its 2018 sequel Ralph Breaks the Internet. She is Vanellope von Schweetz's direct rival, and she and the other racers constantly pick on Vanellope, whom they think is a glitch in the game until she reforms and apologizes to Vanellope. Her best friends are Candlehead and Rancis Fluggerbutter.

Taffyta is a rather bossy character but also somewhat touchy; when she starts crying it's difficult for her to stop. She seems to like having people she can look up to and hates being humiliated.

Taffyta is going to be in the race with the other racers, but she is displeased when Vanellope tries to join as well. She and the other racers confront her, saying that because she is a glitch she cannot race. Vanellope tries to stand up to Taffyta but is outnumbered and Taffyta passes Vanellope and taunts the kart and starts to wreck it. The other racers then start beating her racing kart to destroy it while Vanellope tries to get Taffyta to stop and pulls Taffyta away, which makes Taffyta actually glitch due to physical contact with a glitch. Taffyta loses her temper toward Vanellope and yells at her, even jabbing her at one point which causes her to flash. Taffyta pushes Vanellope into a mud puddle. Wreck-It Ralph, who had come because Vanellope took his medal, sees this and feels pity for Vanellope and comes out to attack them back and Taffyta and her friends run away. He and Vanellope later steal a different kart but Taffyta doesn't know this.

Ralph is also tricked by King Candy into thinking that if Vanellope races the game will be unplugged and he destroys the kart. Vanellope is later arrested. When the race starts Vanellope is freed by Ralph and her kart is repaired again and she is able to race. Taffyta easily gets in first place but sees Vanellope and orders Candlehead to light the cherry bombs to knock her off the track. However, Vanellope's glitching gets her in front of Taffyta and she, Rancis and Candlehead fall off the track and into a giant ice cream sundae. Taffyta pops out and starts crying at her loss.

Vanellope gets into second place and her glitching reveals King Candy to be Turbo, a racer from another game who was the cause for his game and another game getting unplugged and now came to Sugar Rush. The Cy-Bugs are released onto Sugar Rush and Taffyta hides. After the Cy-Bugs and Turbo are defeated, Vanellope crosses the finish line and Taffyta's memory is restored. It turns out Turbo messed with the programming and that Vanellope is actually the princess of Sugar Rush. As Taffyta tries to apologize for her behavior, Vanellope says she will have her executed, much to her horror. Vanellope then reveals she was only joking and accepts Taffyta's apology. 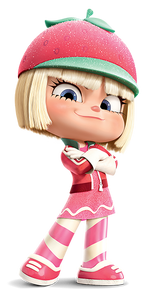 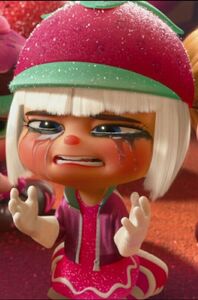