Digimon Xros Wars: The Young Hunters Who Leapt Through Time

To allow Gumdramon digivolve to Arresterdramon

To save Digital World and Human World

Leader
Tagiru Akashi is main character of Digimon Fusion Season 3. He is partner of Gumdramon.

In the Japanese Version, he is voiced by Marina Inoue who also voices Sakura Mamiya and Armin Arlert.

Tagiru is a young boy with amber eyes and brown hair with a red tuft. He wears a blue shirt with a yellow crescent moon behind a yellow star on the chest and a yellow sun on the left shoulder. He also has blue wristbands with yellow stars on them, short, folded bright ceil jeans, and blue shoes with white soles and red tongue. Tagiru is one of the series' Goggle Boys, and wears a pair of blue goggles with amber lenses. Those clothes are damaged by MetalTyrannomon when Tagiru jumps to save Gumdramon. Later, his goggles are destroyed by Astamon, and Mikey gives his goggles to Tagiru.

Tagiru is energetic and reckless and always does things without thinking, but despite his rash behavior, he is willing to risk anything to protect his friends. Whenever he gets excited, he snorts like a bull. He doesn't take insults very well, often getting angry easily. One can say that he is highly rambunctious, but not as much of a jealous type as he always wants something that other people has.

Tagiru also showed to has an impulsive manner as seen when he thought the actor was the stalker who was following Nene and rush to attack him and ignoring Mikey trying to warn him that he is just an actor. Simply put, he is negatively presumptuous.

He also is very gullible and can be easily tricked. Is either that, or he was just too faithful or trustful. 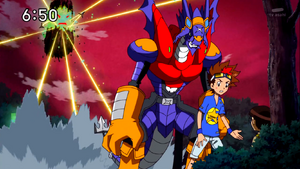 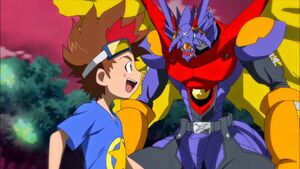 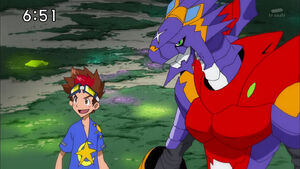 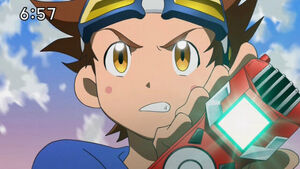 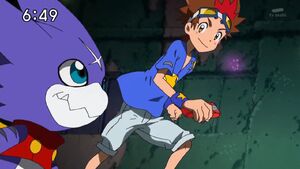 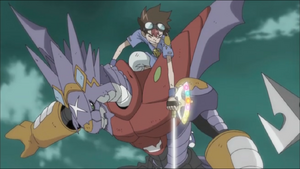 Retrieved from "https://hero.fandom.com/wiki/Tagiru_Akashi?oldid=2052063"
Community content is available under CC-BY-SA unless otherwise noted.