Taiga Aisaka is the main female character in the novel/anime series, Toradora!. She is quite popular for her childish and doll-like looks, but is unable to stomach company from others. Due to her often snapping at others in brutal ways and her short stature, she is given the nickname "Palmtop Tiger".

She is voiced by Rie Kugimiya in the Japanese version of the anime and Cassandra Lee in the English version, the former of whom also voices Shana and Airi Yukifune.

Despite coming from a well to do family, her life with her family is very difficult because of various problems. Her parents are divorced, and her father has chosen his new wife over Taiga, forcing her to move out and live in an apartment by herself. However when her father's business goes bankrupt and he runs away, she is left in the care of her mother who has also re-married and now has a new family of her own. Taiga has difficulty getting along with her step-father and half-sibling. In the last chapters she admits she is too afraid to return to her mother because her mother has become pregnant again and Taiga fears that, since she is 'sure to have a tall child', she will not fit in and would just be a burden to them.

Taiga Aisaka has brown hair, white skin, big eyes with brown pupils and she is short, despite her being 18 years old. She wears different clothes throughout the series, but most often she wears her white uniform with a black bow and red jacket. Eventually in the series she obtains ryuuji's red scarf and wears it around.

Despite her cute, delicate appearance, Taiga is a sarcastic, cynical, and prideful girl who is easily made angry or upset. She hates when people point out her height or call her the Palmtop Tiger, a nickname she earned because of her petite size and tendency to snap at people. Her broken family has made her act this way. Her under-developed body and the added nickname has given her a complex which in turn serves to give her a negative attitude and facial expression. Essentially, Taiga gets upset easily.

Taiga is also brutally honest, typically when she is lashing out at someone. She is clumsy and tries to hide that too; it seems that only Ryuuji has observed it. Despite coming from a well-to-do family, her life with them is very difficult because of various problems. She had lived with her father and stepmother and constantly fought with her parents, but she moved out and since then has taken to living on her own.

Despite her tendency to be aggressive, she is actually a kind person, especially to people she trusts, like Minori. She is extremely loyal, too, as she is willing to fight tooth and nail to protect her loved ones. She is not afraid to speak her mind and is often bad-mouthed because of her somewhat rude attitude toward people and lack of social skills. Taiga gets a lot of confessions from guys, but turns them down since she's afraid to love someone after of her issues with her parents. At first, she had a crush on Kitamura, but she acts clumsy and flustered around him all the time due to shyness. Because she is often misunderstood and judged, people don't see her kind and loyal personality. Taiga wants to treat everyone kindly, but due to her broken family and lack of parenting, she has a hard time coping with reality. She apologizes to her friends if she accidentally snaps at them. 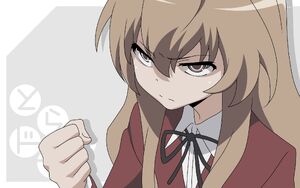 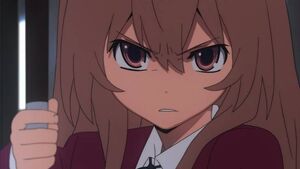 Add a photo to this gallery
Retrieved from "https://hero.fandom.com/wiki/Taiga_Aisaka?oldid=2228719"
Community content is available under CC-BY-SA unless otherwise noted.