King of the Checkmate Four
Head of Development & Pioneer

Spending time with Mio and Wataru.

Taiga Nobori, also known as Kamen Rider Saga, was the King of the Fangires in 2008 and the main antagonist of Kamen Rider Kiva. He later becomes Kamen Rider Dark Kiva. Initially the fiance of Mio Suzuki, he learns that she becomes willing to abandon her Fangire heritage and her future as Queen of the Fangires to be together with his half-brother, Wataru Kurenai.

Taiga was born prior to 1986 as the first born son of Maya, the Queen of the Checkmate Four, and the Checkmate Four's original King. He would receive the title of King at infancy after his father's death before he was spirited away by Maya to be raised by Mamoru Shima as a human child, wearing a glove over his hand to conceal his Checkmate Four crest. It would be while as a boy that he encounters Wataru Kurenai and the two become good friends until Taiga was spirited off, his childhood being under heavy watch.

Along with learning of his true nature as the Fangire offspring of the previous King and Queen of the Checkmate Four, Taiga developed a disdain for humans as he attacks Shima, scarring his foster father's back before taking his leave. As the current King, Taiga intends to prevent the progress of humanity from moving forward to the point of becoming a problem for Fangires like with Ixa. The crime becomes even more unforgivable should the guilty party be a Fangire. When executing an opponent, he says, "The King's sentence is given. It's death!" (王の判決を言い渡す。死だ!, Ō no hanketsu o iiwatasu. Shi da!).

Though his Fangire form is a mystery, he displays impressive powers such as summoning a giant shadowy mass of vipers or conjuring up the Feathered Serpent called Kukulkan (ククルカン, Kukurukan) and multiple giant Sagarc under a larger Mother Sagarc (マザーサガーク, Mazā Sagāku) as his support.

By 2008, Taiga founded the funding company called Development & Pioneer (Ｄ＆Ｐ（ディベロープメント＆パイオニア）, Diberōpumento ando Paionia), which serves as a front to attract those who need funding for research of the betterment of mankind. After watching a corporate testing of a new metal, Taiga meets up with his old friend Wataru as the two catch up while he meets with his arranged fiancée Mio before introducing her to Wataru without realizing their relationship, having no idea of Mio's true feelings towards Wataru until overhearing her admit them to Wataru.

Though he acts calm, it is a cover as he sees his marriage to Mio as absolute and is devastated to learn of her relation to his best friend. Although told by the Bishop to kill Wataru, Taiga refuses and instead gives Wataru an invitation to the wedding between him and Mio, explaining that he's too weak to protect her. However, tensions rise more as he and Mio learn that Wataru is the one who inherited his father's power as Kiva. After learning his mother's location, Taiga learns from her his biological relationship to Wataru as his half-brother.

With this information, Taiga decides instead of killing Wataru, he wants his brother to become their ally, having the Bishop awaken the Fangire blood within Wataru for that purpose. Believing he succeeds in winning Wataru on his side as his right-hand man, Taiga sees marrying Mio the final step to his ideal life being realized with Maya giving him his birth-right as his father's successor to Kiva's power. When Wataru informs him that he wishes to live as himself and not as either human or Fangire, Taiga is shocked and infuriated to the point of conjuring up a Mother Sagarc and her offspring to educate Wataru unsuccessfully, before confronting his half-brother. He makes several more unsuccessful attempts to bring Wataru to his side, and when refused each time, he is forced to fight him.

After an incident in which Shima is critically injured by the Sungazer Fangire, Taiga opts to save him. However, this is a front as he instead transfuses Fangire power into Shima's body, fully healing him in the process while making him into another Sungazer Fangire. At the same time, Mio accepts Taiga's marriage proposal (unaware of her own plans), and undergoes the marriage ritual with her, refusing to accept that she made an attempt on his life. When Shima confronts Taiga to fight, he fakes the fight to make it seem like he killed his stepfather in order to provoke Wataru into fighting him. After Kiva gains the upper hand on Saga, he goes in for the kill, only for Mio to intervene and take the final blow in Saga's place. The sudden interference and Mio's subsequent death leaves Taiga to vow on killing Wataru.

However, Taiga learns that it was actually the Bishop, not Wataru, who killed Mio. Enraged, Taiga beats the Bishop to a bloody pulp before the Fangire runs off, now seeing Taiga unworthy to be his King. Later, Taiga encounters Wataru when dropping off flowers at Mio's gravesite, revealing the truth to him before he accepts Wataru's challenge. However, the battle is interrupted by the Bishop who brings an army of revived Fangires to ambush Saga in an act of vengeance.

After he was defeated by Kiva, Taiga loses his standing among his Fangire peers as Wataru becomes the new King of the Fangires in his place. Refusing to let this happen, Taiga knocks out Maya in a fit of rage in an attempt to acquire the power of Dark Kiva. He would then use said power to settle things with Wataru once and for all, but in the end, he learns the truth from Shima of Wataru`s actions and helps him fight the revived Bat Fangire. Taiga and Wataru eventually fight each other one last time with the title the Fangire King after defeating the Bat Fangire at the behest of Maya who turned out to be alive. The outcome of their battle was not shown. After regaining his position as D&P's president and presenting a plan to find an alternate source of energy for the Fangires to thrive on, Taiga meets up with Wataru and his future nephew Masaru as they join up with the others to fight the Neo-Fangire.

Kamen Rider Saga was part of a group of reinforcement riders led by Akira Date/Kamen Rider Birth to aid the primary riders in defeating the Rock Great Leader. All the Kamen Riders got on their bikes and performed the powerful All Rider Break attack which destroyed the Great Leader.

As the offspring of the Fangire King and Maya, Taiga has inherited some parts of their personality and powers. While mostly cool and calm like the both of them, he is also capable of having a fiery temper like his father. He was also very commanding, arrogant and proud of his status as the King of Fangires. Unlike his father who tried to show no emotion concerning love though, Taiga was somewhat the opposite.

Taiga originally hated most humans (aside from Wataru whom he later found out was his half brother) because of his past with them and saw them as livestock like most Fangires. He also originally tried to prevent the humans from evolving and becoming a threat to Fangires. It was presumably this side of his personality which led to him having a falling out with both Mio and Wataru.

Although somewhat sharp, he can sometimes be oblivious as well. When he lost almost everything, Taiga showed a desperate side and went to Maya despite his earlier comments about her, hinting a helpless side as well. Despite these faults, Taiga wasn't truly evil and showed some loyalty towards others he cared about. He also cared about Maya and Shima despite holding a grudge against the both of them. As Shima stated later on, Taiga actually has some kindness in his heart which he showed from time to time. He also showed guilt and repentance when he knocked out Maya to steal Kivat-bat the 2nd. After changing for the better thanks to Wataru, Taiga became more accepting of other species and created a project which will nourish the Fangires (and presumably the rest of the Demon Races which require life energy) without human life energy. he also seemingly became more humble and kind.

With his Fangire powers, Taiga has rather impressive powers related to snakes. This potential was noted by Bishop himself who has stated Taiga's powers to be around 1st or 2nd place even out of all the previous Fangire Kings. Even as Saga, Taiga had enormous power and initially overpowered Wataru as Kiva Emperor Form. After Wataru became more mature and confident, Taiga soon found himself the weaker of the two. This gap mostly closed up when he gained Kivat-bat the 2nd, although he seemed unable to use it as effectively as both his predecessors.

Saga's only form is accessed by inserting the Jacorder into Sagarc after the Sagarc Belt is formed. It is with this same item that Saga performs the Snaking Death-break (スネーキングデスブレイク, Sunēkingu Desubureiku) finishing attack, where he impales the target with the jacorder in whip mode, and hangs them until they are destroyed. Taiga then abandons his power as Saga to gain the power of Dark Kiva.

Dark Kiva only appears to have one form, similar to that of Kiva Emperor Form in black and red. However, Dark Kiva does not require the use of a being such as Tatsulot to achieve this form, and has no chains on his body as Kiva needs to control his power. As Dark Kiva, Taiga is pretty much like the King of the Checkmate Four, yet he retains his weapon, the Jacorder.

As Maya would later explain, the Kiva power cannot be used by a normal human, as usage would ultimately result in death. This would prove to be true, as Otoya had used the Dark Kiva power a total of three times before finally dying due to the strain it put on his body. Shima also mentioned this when Wataru revealed his heritage to him. 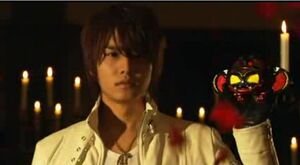 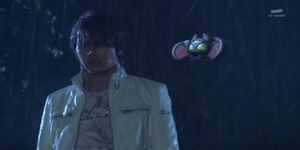 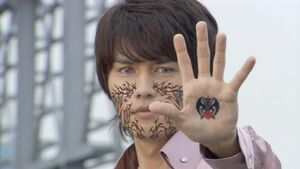 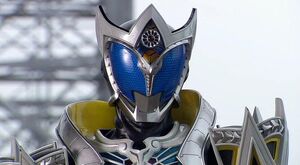 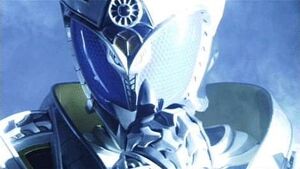 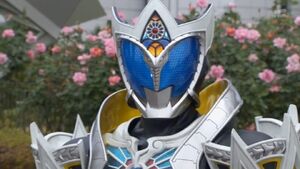